One True Measure of Stagnation: Not in the Labor Force

This is a stark depiction of underlying stagnation: paid work is not being created as population expands.

Heroic efforts are being made to cloak the stagnation of the U.S. economy. One of these is to shift the unemployed work force from the negative-sounding jobless category to the benign-sounding Not in the Labor Force (NILF) category.

But re-labeling stagnation does not magically transform a stagnant economy. To get a sense of long-term stagnation, let's look at the data going back 38 years, to 1977.

-- The period 2000 to 2015, an era characterized by bubbles, post-bubble crises and low-growth "recovery"

In all cases, I list the Not in Labor Force (NILF) data and the population of the U.S.

Notice how population growth was 23.6% 1977-1997 while growth of NILF was a mere 10.5% As the population grew, job growth kept NILF to a low rate of expansion. While the population soared by 52 million, only 6.5 million people were added to NILF.

But by the present era, Not in the Labor Force expanded by 37.5% while population grew by only 14.2%. This chart shows the difference between the two eras: those Not in the Labor Force soared by an unprecedented 26 million people--a staggering 15.6% of the nation's work force of 166 million. (Roughly 140 million people have some sort of employment or self-employment, though millions of these earn less than $10,000 a year, so classifying them as "employed" is a bit of a stretch). 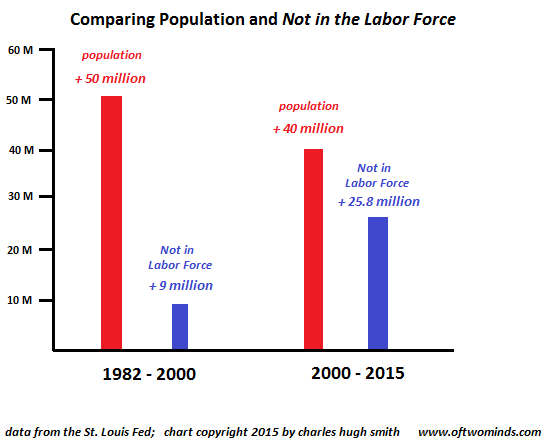 This is a stark depiction of underlying stagnation: paid work is not being created as population expands. Those lacking paid work are not just impoverished; they lose the skills and will to work, a loss to the nation in more than economic vitality.