Untangling America from the American Empire

Those calling for an end of the Empire don't seem to realize that the federal state's vast entitlement programs are ultimately funded by the Empire.

The Status Quo would have us believe that America and its Empire are one entity. This is handy for those with Imperial designs but it is false: America could be untangled from its Empire, and many of us believe it is essential that America untangles itself from its Imperial structures and ideologies.

What I call The Imperial Project was cobbled together in the aftermath of World War II, when the Soviet Union and America posed an existential threat to each other's ideologies and systems. It may be hard to believe, but the U.S. did not have a Central Intelligence Agency (CIA) or other espionage/intelligence gathering agency prior to World War II.

America had no spy agency and no Black Operations/Special Forces capabilities. The National Security State as we know it today did not exist.

Though the Deep State has long been an essential feature of the American power structure, the post-war Deep State extended its reach globally in ways that the pre-war Deep State could not.

I have covered the Deep State for many years:

Many people naively think all that's needed to end the Imperial Project is close America's overseas military installations and end the endless wars of choice. While the eradication of the neo-conservative Imperial agenda would be a welcome first step, it would only be a first step, as I explained in You Can't Separate Empire, the State, Financialization and Crony Capitalism.

To untangle America from its Imperial Project, we also need to end financialization and crony-state-capitalism, both of which are key features of the Imperial Project. what better way is there to extend influence than exporting inflation and offering limitless credit in U.S. dollars?

What better way to skim the profits from trade than importing materials and goods and exporting fiat currency?

Those calling for an end of the Empire don't seem to realize that the federal state's vast entitlement programs are ultimately funded by the Empire: not directly, but indirectly via its ability to foist trillions of dollars of debt on the world economy. 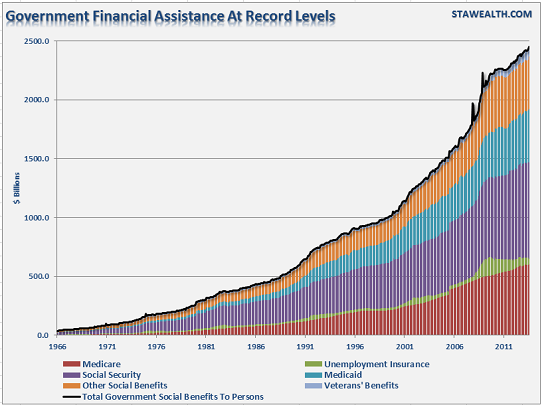 The believers that hot wars are all there is to the Imperial Project fall silent when their share of the swag might be threatened. Unsurprisingly, we want the financial benefits of Empire but recoil at the entanglements of Empire.

Imperial Rome offers a useful template for what happens when the domestic populace gets dependent on Imperial wealth: the notion of sacrifice for the nation goes out the window and bread and circuses become the sole source of state legitimacy.

For America to come home and untangle itself from the Imperial Project, it will have to do more than not meddle in everyone else's affairs; it will have to learn to live within its means--what it earns from producing goods and services, not what it skims from global financialization.