If Employment Is So Great, Why Are Withholding Taxes Declining?   (September 9, 2013)


It's difficult to have a meaningful national debate about economic policy when "headline numbers" are juiced to make things appear rosier than reality.

Since unemployment statistics are either suspect or blatantly bogus, we must look for other less manipulated statistics for some modicum of truth. Key statistics of employment, income and production are vital propaganda tools for the status quo, and the temptation to adjust them to manage perceptions is apparently irresistible.

Here in the U.S., unemployment statistics are a travesty of a mockery of a sham:

Guggenheim On The US Jobs Growth "Mirage"

In China, output is routinely juiced to fantasy levels:

To get some semi-accurate sense of China's actual output, as opposed to official propaganda, skeptics look to electricity consumption as an imperfect but better-than-lies gauge of actual economic activity.

Here in the U.S., longtime correspondent B.C. suggests we look at withholding taxes as a more accurate measure of employment than the ginned-up official numbers. Withholding taxes are payroll taxes, and as such they are a direct measure of payrolls and earned income. (Self-employed people who don't issue themselves monthly or weekly paychecks pay their withholding taxes quarterly.)

In other words, withholding taxes (i.e. Social Security, Medicare and estimated income taxes) are a very broad and accurate measure of the earned income of both employees and self-employed.

Since many high-earning professionals such as attorneys and accountants are self-employed, the earnings reported by the self-employed are significant. The self-employed have some control over when and how they report earnings, and many chose to report income in late 2012 rather than in 2013 to avoid the tax increases that kicked in on January 1, 2013.

This accounts for the spike in wages and withholding taxes in late 2012.

Here is a chart of wages/salaries and withholding receipts: 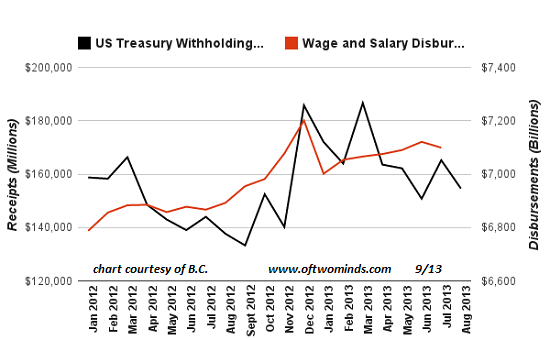 Wages/salaries have trended up since early, but growth has flattened recently. Withholding taxes are declining.

Here are employment and withholding receipts. Civilian employment has increased by some 2.5 million jobs since January 2012, but withholding receipts are actually lower than January 2012. This strongly supports what many others have already observed: the substitution of lower-wage part-time jobs for full-time employment. It's difficult to conjure up any other explanation for employment rising and payroll taxes declining. Massive cuts in wages would have the same consequence, but there is no evidence of widespread reductions in hourly wages. 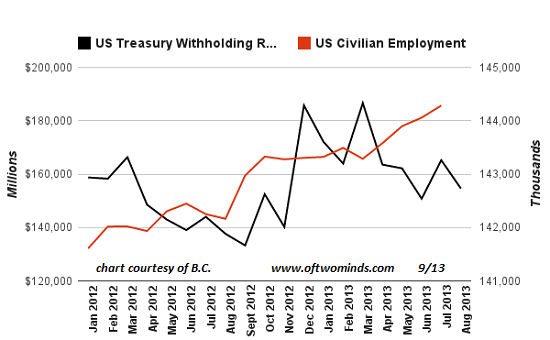 Here are employment and wages/salaries. We see the same basic dynamic here: the number of jobs continues increasing but wages/salaries are trending flat to down. 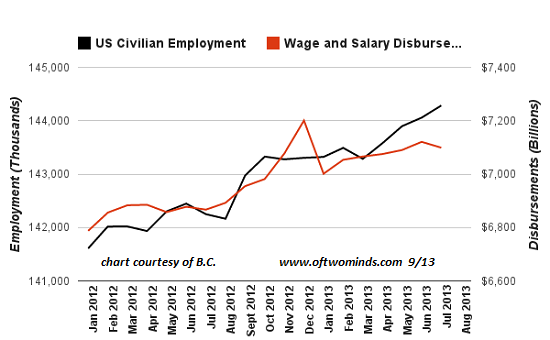 The con being played here is the assumption that more jobs means more wages which means things are getting better and better in every way, every day. If payroll withholding taxes are declining, and wages/salaries are flatlined, things are not getting better and better in terms of earned income flowing into household bank accounts, purses and wallets.

About 20 million working-age adults have supposedly dropped out of the U.S. labor force (and therefore become zombies who are not counted in tallies of unemployment) since January 2001. This is roughly comparable to the entire workforce of Italy (22.8 million) or South Korea (25 million).

Record 90.5 Million Out Of Labor Force As Half A Million Drop Out In One Month (Zero Hedge)

It's difficult to have a meaningful national debate about economic policy when perceptions and "headline numbers" are juiced to make things appear rosier than reality.


My new book The Nearly Free University and The Emerging Economy (Kindle eBook) is available at a 20% discount ($7.95, list $9.95) this week. Read the Forword, first section and the Table of Contents.

Read the Forword, first section and the Table of Contents.