The energy boom directly reduces the number of U.S. dollars being supplied to the global economy, and that pushes the value of the dollar higher.

The petrodollar regime--that oil is bought and sold globally in U.S. dollars--is easy to understand. It boils down to these two principles:

1. Petroleum is the lifeblood of the global economy.

2. Any nation that can print its own currency and trade the conjured money for oil has an extraordinary advantage over nations that cannot trade freshly created money for oil.

This is why many analysts trace much of America's foreign policy back to defending the petrodollar regime. In the normal course of things, anyone printing money in quantity would soon find the conjured currency bought fewer and fewer barrels of oil as the surplus of conjured currency floating around the world greatly exceeded the supply of oil.

Currency can be conjured out of thin air, but oil is increasingly costly to find, extract and process.

America's energy boom is creating consequences for the value of the dollar. As I have explained here a number of times, this goes back to Triffin's Paradox, which states that when one nation's fiat currency is used as the world's reserve currency, the needs of the global trading community are different from the needs of domestic policy makers.

What Will Benefit from Global Recession? The U.S. Dollar (October 9, 2012)

Prior to 1971, the dollar was backed by gold, which acted as a supra-national anchor to the dollar's reserve status. The gold standard inhibited both massive trade deficits and money creation, so it was jettisoned.

The Triffin paradox is a theory that when a national currency also serves as an international reserve currency, there could be conflicts of interest between short-term domestic and long-term international economic objectives. This dilemma was first identified by Belgian-American economist Robert Triffin in the 1960s, who pointed out that the country whose currency foreign nations wish to hold (the global reserve currency) must be willing to supply the world with an extra supply of its currency to fulfill world demand for this 'reserve' currency (foreign exchange reserves) and thus cause a trade deficit. (emphasis added)

The use of a national currency (i.e. the U.S. dollar) as global reserve currency leads to a tension between national monetary policy and global monetary policy. This is reflected in fundamental imbalances in the balance of payments, specifically the current account: some goals require an overall flow of dollars out of the United States, while others require an overall flow of dollars in to the United States. Net currency inflows and outflows cannot both happen at once.

Basic supply and demand will push the dollar higher relative to other currencies and eventually, other assets.

One reason why the trade deficit is shrinking is the U.S. is supplying more of its own energy. Every unit of petroleum extracted in the U.S. means a unit does not have to be imported from oil exporting nations.

The energy boom directly reduces the number of dollars being supplied to the global economy. This creates a relative scarcity of dollars, which pushes the value of the dollar higher: 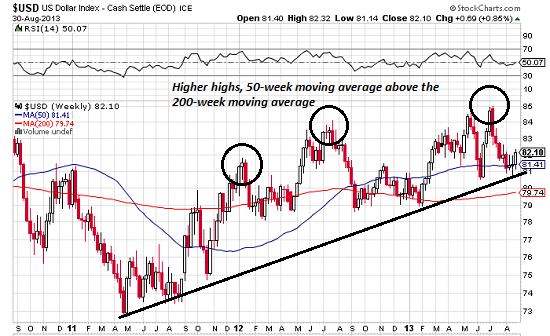 Is it coincidence that the dollar's uptrend aligns with the rise of U.S. energy production? It's not coincidence, it's causation.

Oil prices have broken out of a technical wedge: 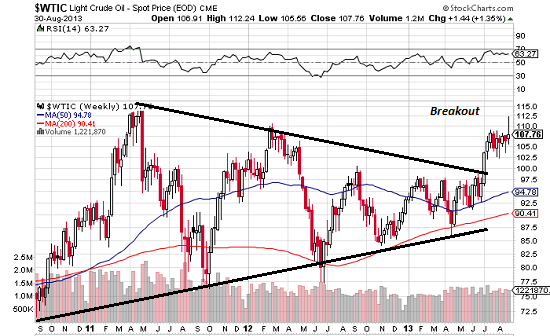 As global oil prices push higher, more previously marginal petroleum reserves in the U.S. and Canada become profitable, further boosting production. The more energy produced in the U.S., the smaller the trade deficit and the fewer dollars provided to the global economy.

As the dollar strengthens, the U.S. will pay less for imported energy and earn more for exported energy. This decline in energy costs will ripple through the real economy, offsetting any decline in exports. A strengthening dollar lowers the cost basis of all goods and services originating in the U.S.

Many observers confuse the dollars created by the Federal Reserve with the dollars available to trading nations for reserves and dollar-denominated debt. If the Fed creates $1 trillion which then lays fallow in the U.S. financial system, those dollars are not exported into the global economy via trade deficits.

Add all this up and it's clear America's energy boom will push the dollar higher as the trade deficit shrinks and those needing dollars on the global market will have to pay more for to get the dollars they need for reserves and payment of dollar-denominated debts.