Who benefits from serial bubbles? The financial sector and the central government.

If there is any one strikingly obvious feature of the U.S. economy in the past 15 years, it's the serial asset bubbles, one after another. Take a look at this chart: 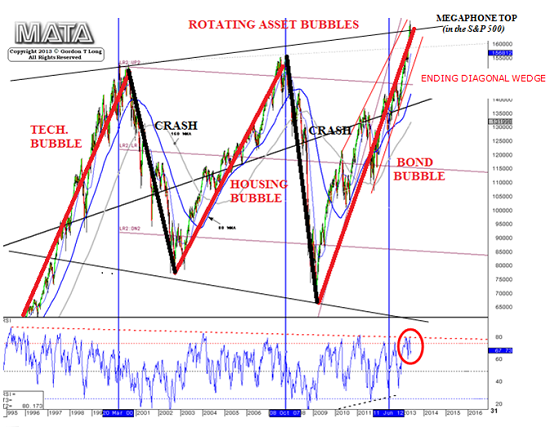 Why did our economy become dependent on asset bubbles for "growth"? One way to find an answer is to ask: cui bono, to whose benefit? Correspondent Jeff W. has the answer: the financial sector and the central government.

We should always bear in mind how lucrative asset bubbles are for the banks, the government, and super-wealthy insiders. The banks make money by loaning to speculators because their collateral gets a boost. As collateral is boosted, they can make loans to borrowers who are poor credit risks (no job, no income liar loans). Government makes money by taking a cut of speculative profits through taxes. Clued-in insiders get to ride the bubbles up and down, getting advance signals of the turns.

When Ben Bernanke says in effect of the housing bubble, What bubble? We didnt know there was any bubble. We dont have any way to know if there is a bubble or not, I am not impressed. The housing bubble of 1981-2006 gave rise to a huge expansion of the finance, insurance and real estate sectors; enriched government, which expanded greatly during those 25 years; and witnessed the emergence of super-wealthy who measure their wealth in the tens of billions.

To me, when Ben Bernanke says, What bubble? it is like a kid with chocolate all over his mouth, saying, What cookies? I didnt eat any cookies.

Each asset bubble is a bonanza for the banks, government, and wealth insiders, and because those exact groups run this country, and because we have lived through serial bubbles since 1971, I say that if a person says there will be no more asset bubbles, the burden is on him to explain why. Why should the Powers That Be deny themselves a bonanza?

Those who managed the 2008 crisis (Bernanke, Paulson, and an assorted cast from Goldman Sachs), saw to it that the government and the Fed emerged unscathed. The Federal government is now much bigger than ever. They also saw to it that the TBTF banks emerged unscathed. They are now larger and more dominant than ever. Other super-wealthy such as Warren Buffett and George Soros also profited from the crisis.

Ben Bernanke is hailed as a genius for his masterful handling of the 2008 financial crisis. He may protest that he never saw the crisis coming, and that might even be true (though I doubt it), but he was well prepared to use the crisis to enrich the TBTF banks, the government, and super-wealthy insiders.

So in summary, because every asset bubble is a bonanza for the Powers That Be, I do not believe they blindly stumble into them. The work together as a team to engineer asset bubbles.

Thank you, Jeff. I would add that the serial-bubble economy has a pernicious appeal to debt-serfs and those with minimal financial capital, because each bubble holds out the promise that any debt-serf who manages to catch the ride up and exit at the top can vastly increase his/her wealth, just like the top 1/10th of 1%.

But timing the bubble is not necessarily easy (except in hindsight), and the state of mind required to sell when everyone else is buying must overcome powerful forces in human psychology: the herd instinct, greed, confirmation bias, etc.

Those enabling and extending the bubbles know very few participants will overcome greed and the herd instinct and sell near the top; rather, they will become bagholders of phantom assets that quickly lose value, leaving only the debt to service.

To escape the crushing burden of debt (except for student loans, which are fiendishly difficult to escape), the bagholders must sell out, losing whatever wealth they might have had. Those who sold early have cash to buy the assets on the cheap. If the assets no longer have value, that's OK, too--the money has already been made originating and offloading the debt that was borrowed to buy the assets.

As the saying goes, rinse and repeat. No wonder the serial-bubble model is so attractive to the Powers That Be.