This cycle of entrenched interests protecting their skims and scams via central bank monetary policy is self-liquidating.

I finally figured out that the core purpose of central banks' monetary policy is to enable vested interests to avoid desperately needed reforms in the real economy. This might have been blindingly obvious to others, but I finally caught on to the dismaying reality: the only purpose of central bank monetary policy is to keep the bloated, corrupt, inefficient and self-liquidating vested interests of the state-cartel crony capitalism from having to suffer the consequences of real reforms.

Japan ably serves as Exhibit #1 of this core dynamic. The broad narrative in Japan is a template for state-cartel crony capitalism everywhere: after World War II, the system of state-managed cartels was re-instated with modest structural changes. The Central State and bank enabled the expansion of export-sector cartels--an expansion that followed the classic S-Curve of expansion, maturity and stagnation with great precision: 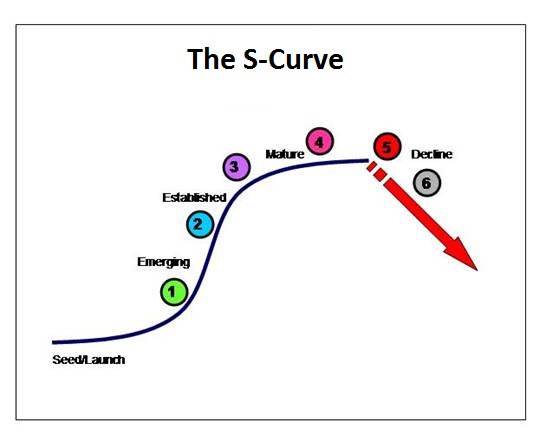 We can grasp just how sclerotic and fixed this system is by asking: how many of Japan's top 20 electronics hardware corporations entered the top 20 after 1946? The answer: none.

Indeed, Abenomics can be properly understood as a last-ditch effort by the state and central bank to avoid the structural reforms Japan desperately needs to adapt successfully to the realities of the 21st century. Alas, these structural changes-- loosening the grip of quasi-monopolies and cartels, writing down unpayable debts, freeing up the labor market, ending the completely arbitrary skims and scams of the entrenched interests currently protected by the Central State--will necessarily crimp or destroy the fat profits these interests have skimmed since 1946.

As a result, the political resistance to meaningful reform is immense. A few of these rigid skims are described in Voodoo Abenomics: Japan's Failed Comeback Plan (Foreign Affairs):

To lift productivity, Japan needs serious structural changes to promote creative destruction, the process of replacing decaying firms with vibrant ones. The sectors of Japans economy that face international competition, such as the auto industry, enjoy high productivity. But the lions share of the economy is domestically oriented, and much of it is shielded from both international and domestic competition by domestic regulations and cartel-like business practices.

Japans milk market isnt even open to domestic competition. The powerful farm cooperative known as Japan Agriculture uses its stranglehold on distribution to protect inefficient farmers in the main part of Japan by hindering shipments of milk from the larger, more efficient farms in the northern island of Hokkaido. Tokyo turns a blind eye because Japan Agriculture is a powerful electoral ally of Abes political party and because rural voters are disproportionately represented in the Diet. A real reformer would scrap Japan Agricultures exemption from the Antimonopoly Act, a law passed in 1947 designed to encourage competition, and use the act to crack down on such practices.

The net result of protecting cartels and fiefdoms by lowering interest rates to zero and flooding the financial sector with "free money" is social depression, characterized by the erosion of employment, and a hollowing out of the economy's core strengths:

Since Japans rigid labor laws make it nearly impossible to lay off permanent employees in downtimes, companies now tend to fill open slots with part-time or temporary workers, and they typically pay them a third less. Today, 17 percent of Japanese men aged 25 to 34 hold such second-class jobs, up from four percent in 1988. Low-paid temps and part-timers now make up 38 percent of Japanese employees of all ages and both sexes -- a stunning figure for a society that once prided itself on equality.

Trying to "fix" a sclerotic, inefficient state-cartel economy by boosting inflation is another self-liquidating path to destruction:

Since 1997, wages in Japan have fallen by nine percent in real terms. They are expected to continue falling, despite highly advertised wage hikes by a few hundred giant firms whose profits from overseas sales have been artificially boosted by the weaker yen. Abe claims that wages will rise once workers and firms come to expect inflation. In reality, deflation is not the cause of Japans problems but a symptom. Trying to cure Japans malaise by generating inflation is like trying to cure a fever by putting ice on the thermometer.

Examples of this same dynamic abound in Europe, the U.S., Korea, China, Russia-- in effect, every nation with a state/central bank pursuing monetary policies that protect entrenched interests from pressures to reform.

In the U.S., we need look no farther than higher education, sickcare and national defense for state-cartels systems operating to benefit vested interests. The Federal Reserve's policies of zero-interest rates (ZIRP) and free money for financiers have enabled these corrupt, self-serving, parasitic sectors to maintain their skims and bloated cost structure--but at the cost of hollowing out the economy and increasing the risk that the financial Ponzi scheme will collapse in a heap of leveraged phantom assets.

Now the latest scheme being proposed to dodge the needed reforms is to distribute free money from central banks directly to households. In other words, now that all these bloated, corrupt, inefficient cartels are no longer affordable, the central bank will save the day by issuing free money, backed by the creation of debt.

This cycle of entrenched interests protecting their skims and scams via central bank monetary policy is self-liquidating: every nation that pursues this "fix" will find its economy liquidated by financial implosion and the hollowing out of productive sectors to support crony-capitalist unproductive sectors.

The author's conclusion is true not just of Japan but of every nation from Greece to the U.S. to China that is trapped in the self-liquidating cycle of protecting its entrenched elites, cartels and fiefdoms:

Japan will eventually reform and revive. Its tragedy is that it is filled with smart, ambitious, creative individuals who are trapped in once vibrant but now ossified political and economic institutions.