The Demise of the Dollar: Don't Hold Your Breath

So let's look at currency flows, reserves and debt.

The demise of the U.S. dollar has been a staple of the financial media for decades. The latest buzzword making the rounds is de-dollarization, which describes the move away from USD in global payments.

De-dollarization is often equated with the demise of the dollar, but this reflects a fundamental misunderstanding of the currency markets.

Look, I get it: the U.S. dollar arouses emotions because it's widely seen as one of the more potent tools of U.S. hegemony. Lots of people are hoping for the demise of the dollar, for all sorts of reasons that have nothing to do with the actual flow of currencies or the role of currencies in the global economy and foreign exchange (FX) markets.

So there is a large built-in audience for any claim that the dollar is on its deathbed.

So let's ground the discussion of the demise of the USD in some basic fundamentals. Now would be a good time to refill your beverage/drip-bag because we're going to cover some dynamics that require both emotional detachment and focus.

First, forget what currency we're talking about. If the USD raises your hackles, then substitute quatloos for USD.

There are three basic uses for currency:

1. International payments. This can be thought of as flow: if I buy a load of bat guano and the seller demands payment in quatloos, I convert my USD to quatloos--a process that is essentially real-time--render payment, and I'm done with the FX part of the transaction.

2. Foreign reserves. Nation-states keep reserves for a variety of reasons, one being to support their own currency if imbalances occur that push their currency in unwanted directions.

The only nations that don't need to hold much in the way of currency reserves are those that issue a reserve currency--a so-called "hard currency" that is stable enough and issued in sufficient size to be worth holding in reserve.

3. Debt. Everybody loves to borrow money. We know this because global debt keeps rising at a phenomenal rate, in every sector: government (public), corporate and household (private sectors).(see chart below) 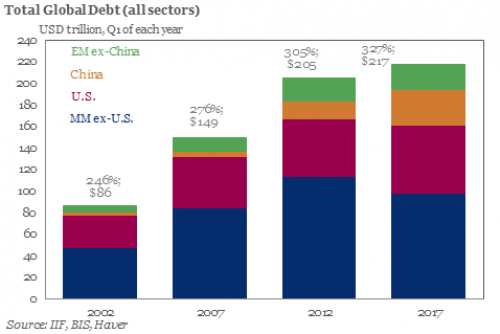 What gets tricky is debt denominated in some other currency. Let's say I take out a loan denominated in quatloos. The current exchange rates between USD and quatloos is 1 to 1: parity. So far so good. I convert 100 USD to 100 quatloos every month to make the principal and interest payment of 100 quatloos.

Then some sort of kerfuffle occurs in the FX markets, and suddenly it takes 2 USD to buy 1 quatloo. Oops: my loan payments just doubled. Where it once only cost 100 USD to service my loan denominated in quatloos, now it takes $200 to make my payment in quatloos. Ouch.

Notice the difference between payments, reserves and debt: payments/flows are transitory, reserves and debt are not. What happens in flows is transitory: supply and demand for currencies in this moment fluctuate, but flows are so enormous--trillions of units of currency every day--that flows don't affect the value or any currency much.

FX markets typically move in increments of 1/100 of a percentage point. So flows don't matter much. De-dollarization of flows is pretty much a non-issue.

What matters is demand for currencies that is enduring: reserves and debt. The same 100 quatloos can be used hundreds of times daily in payment flows; buyers and sellers only need the quatloos for a few seconds to complete the conversion and payment.

But those needing quatloos for reserves or to pay long-term debts need quatloos to hold. The 100 quatloos held in reserve essentially disappear from the available supply of quatloos.

Another source of confusion is trade flows. If the U.S. buys more stuff from China than China buys from the U.S., goods flow from China to the U.S. and U.S. dollars flow to China.

As China's trade surplus continues, the USD just keep piling up. What to do with all these billions of USD? One option is to buy U.S. Treasury bonds (debt denominated in dollars), as that is a vast, liquid market with plenty of demand and supply. Another is to buy some other USD-denominated assets, such as apartment buildings in Seattle.

This is the source of the petro-dollar trade. All the oil/gas that's imported into the U.S. is matched by a flow of USD to the oil-exporting nations, who then have to do something with the steadily increasing pile of USD.

Nations aspiring to issue a reserve currency have the opposite problem. They need enough fresh currency to inject into the global FX markets to supply those wanting to hold their currency in reserve.

This means any nation running structural trade surpluses will have difficulty issuing a reserve currency. Nations shipping goods and services overseas in surplus end up with a bunch of foreign currencies--whatever currencies their trading partners issue. This is opposite of the global markets need, i.e. a surplus (supply) of the reserve currency.

A reserve currency cannot be pegged; it must float freely on the global FX exchange. China's currency, the RMB, is informally pegged to the USD; it doesn't float freely according to supply and demand on global FX markets.

Nobody wants to hold a currency that can be devalued overnight by some central authority. The only security in the realm of currencies is the transparent FX market, which is large enough that it's difficult to manipulate for long.

This is why China isn't keen on allowing its currency to float. Once you let your currency float, you lose control of its exchange rate/value. The value of every floating currency is set by supply and demand, period. No pegs, no "official" rate, just supply and demand.

If traders lose faith in your economy, your ability to service debt, etc., your currency crashes.

So let's look at currency flows, reserves and debt. In terms of currencies used for payments, the euro and USD are in rough parity. Note the tiny slice of payments made in RMB/yuan. This suggests 1) low demand for RMB and/or 2) limited supply of RMB in FX markets.

The USD is still the dominant reserve currency, despite decades of diversification. Global reserves (allocated and unallocated) are over $12 trillion. Note that China's RMB doesn't even show up in allocated reserves--it's a non-player because it's pegged to the USD. Why hold RMB when the peg can be changed at will? It's lower risk to just hold USD. 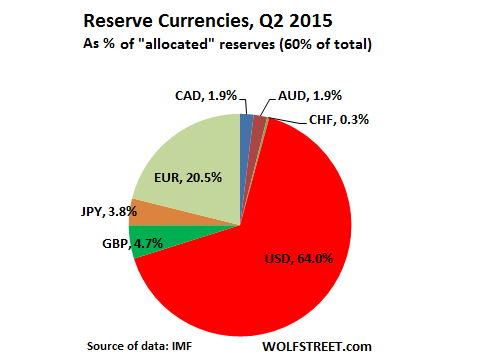 While total global debt denominated in USD is about $50 trillion, the majority of this is domestic, i.e. within the U.S. economy. $11 trillion has been issued to non-banks outside the U.S., including developed and emerging market debt: 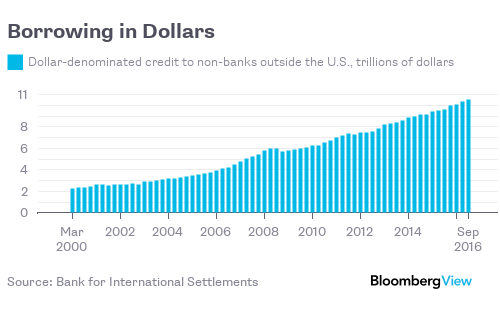 According to the BIS, if we include off-balance sheet debt instruments, this external debt is more like $22 trillion. FX swaps and forwards: missing global debt?

Every day, trillions of dollars are borrowed and lent in various currencies. Many deals take place in the cash market, through loans and securities. But foreign exchange (FX) derivatives, mainly FX swaps, currency swaps and the closely related forwards, also create debt-like obligations. For the US dollar alone, contracts worth tens of trillions of dollars stand open and trillions change hands daily. And yet one cannot find these amounts on balance sheets. This debt is, in effect, missing.

The debt remains obscured from view. Accounting conventions leave it mostly off-balance sheet, as a derivative, even though it is in effect a secured loan with principal to be repaid in full at maturity. Only footnotes to the accounts report it.

Focusing on the dominant dollar segment, we estimate that non-bank borrowers outside the United States have very large off-balance sheet dollar obligations in FX forwards and currency swaps. They are of a size similar to, and probably exceeding, the $10.7 trillion of on-balance sheet debt.

So let's wrap this up. To understand any of this, we have to start with Triffin's Paradox, a topic I've addressed numerous times here. The idea is straightforward: every currency serves two different audiences, the domestic economy and the FX/global economy. The needs and priorities of each are worlds apart, so no currency can meet the conflicting demands of domestic and global users.

So if a nation refuses to float its currency for domestic reasons, it can't issue a reserve currency. Period.

If a nation runs trade surpluses, it has few means to emit enough currency into the FX market to fulfill all three needs: payment, reserves and debt.

As for replacing the USD with a currency convertible to gold: first, the issuer would need to emit trillions for the use of its domestic economy and global trade (let's say $7 trillion as an estimate). Then it would need to issue roughly $6 trillion for reserves held by other nations, and then another $11 trillion (or maybe $22 trillion) for those who wish to replace their USD-denominated debt with debt denominated in the new gold-backed currency. 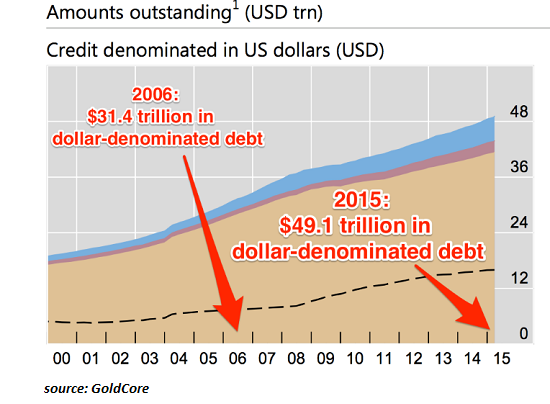 So that's at least $24 trillion required to replace the USD in global markets, roughly three times the current value of all the gold in existence. Given the difficulty in acquiring more than a small percentage of available gold to back the new currency, this seems like a bridge too far, even if gold went to $10,000 per ounce.

Issuing a reserve currency makes heavy demands on the issuing nation. Many observers feel the benefits are outweighed by the costs. Be that as it may, the problem of replacing the USD in all its roles is that no other issuer has a large enough economy and is willing to shoulder the risks and burdens of issuing a free-floating currency in sufficient size to meet global demands.

The Fed's Global Dollar Problem Borrowers around the world have gone on a dollar binge. This makes them vulnerable when interest rates rise.