Japan has proven that decay can be stretched into decades, but it has yet to prove that gravity can be revoked by central bank monetary games.

Japan's fiscal and monetary extremes are in the news again: this time it's the Bank of Japan's extraordinarily large ownership of Japanese stocks, a policy intended to boost "investor sentiment" and prop up sagging equity valuations:

The Tokyo Whale Is Quietly Buying Up Huge Stakes in Japan Inc.

The core failure of Japan's central bank and state is they have attempted to substitute monetary games for desperately needed social, political and economic reforms. This is the Keynesian ideology and project in a single sentence:

Keynesian policy holds that expansionary monetary and fiscal policy can be substituted for structural social, political and economic reforms, enabling the status quo to retain its power and privileges without disruption.

In effect, Japan has pursued a vast monetization campaign for 26 years. The Bank of Japan creates money out of thin air and uses the free money to buy government bonds, funding the state's enormous fiscal deficits (also known as monetizing government debt). The BoJ has extended this monetization to corporate bonds and the stock market-- effectively propping up government debt, corporate debt and the stock market with newly created money.

That these were once private-sector markets has been set aside, as the only thing that matters now is keeping them propped up, regardless of the cost. As I note in my new book Why Our Status Quo Failed and Is Beyond Reform, when emergency measures become permanent policies, you know the status quo is on life support.

Longtime readers know I have a long history of studying Japan, starting with language and cultural studies in university (mid 1970s) and continuing into the 2000s with economic, financial and social analyses. We have many friends in Japan (representing all age groups), and maintain an on-the-ground situational awareness of cultural/social trends.

If you seek a data-based grasp of Japan's fiscal and financial decay, I recommend the following documents: the first is an easy-to-digest series of slides from an OECD study, the next two are detailed official Ministry of Finance reports in English, and the fourth one is an article describing the political resistance of the status quo in Japan to any real, systemic reform:

The key takeaway here is that decay can last for decades, enabling the status quo of the state and media to maintain the illusion that superficially all is well. As visitors and paid pundits never tire of exclaiming, Japan remains a wealthy nation where everything works wonderfully well--public transport, etc.--and the average lifestyle is enviable: long lives, good health, an abundance of consumer goodies, etc.

But this well-being has been maintained at a high cost. Social cohesion is fraying (beneath the surface, of course), birthrates continue to decline (and what does that say about a culture, that young women no longer want children?) and the signs of economic stagnation are visible to anyone who peeks beneath the hood.

Not only are some problems immune to printing/borrowing more money, the reliance on printing/borrowing vast sums of money year after year creates a new set of intractable problems. Just to give one example of many: over 80% of Japan's farmers are over 60 years of age and are poised to retire in the next decade. Printing money hasn't printed new young eager farmers, nor has it changed the perverse incentives and political imbalances that are exacerbating the problem.

Decades of borrowing money in a futile attempt to avoid structural reforms has crippled Japan's fiscal future. Even at effectively zero rates of bond yields, Japan now spends roughly a quarter of its government budget on debt service--and servicing of existing debt now consumes 41% of all tax revenues. 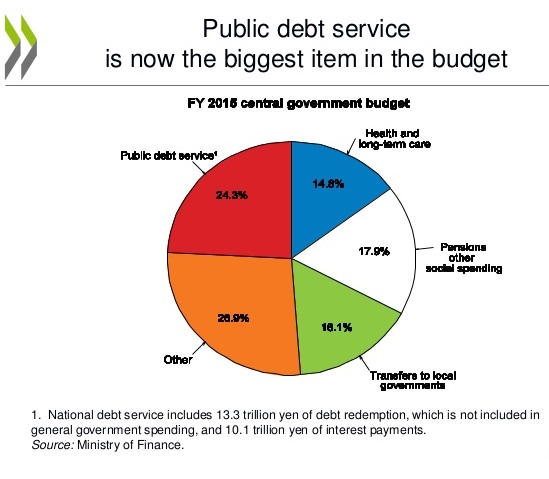 Tax revenues only cover 64% of spending; 35.6% of the government's spending is borrowed.

These are staggeringly unsustainable policies, yet the status quo's refusal to accept fundamental structural changes dooms Japan to the TINA Trap: there is no alternative to endless monetary expansion and central-planning control of markets.

Meanwhile, the fiscal realities become more unsustainable every year. While tax revenues increased 14.7% from 51 trillion yen (TY) at the peak of the property and stock bubble in 1989 to 57.6 TY today, social security spending has tripled from 10 TY to 32 TY.

Even as the BoJ repressed interest rates paid on government bonds to near-zero, national debt service more than doubled, from 11.6 TY to 23.6 TY.

Cutting income taxes--another Keynesian staple--failed to accomplish anything but further weaken the fiscal outlook. The percentage of personal income taxes as a share of all tax revenue has plummeted, to no avail: all the conventional measures of economic vitality have continued their downward trend.

Every status quo and every nation has pursued the same fantasy: that playing monetary games such as quantitative easing and buying stocks and bonds to prop up over-valued markets can be substituted for painful structural reforms in the core fiscal, social and financial sectors.

Japan has proven that decay can be stretched into decades, but it has yet to prove that gravity can be revoked by central bank monetary games.

My new book is #2 on Kindle short reads -> politics and social science: Why Our Status Quo Failed and Is Beyond Reform ($3.95 Kindle ebook, a 20% discount thru May 1, $8.95 print edition) For more, please visit the book's website.