The Panama Papers: This Is the Consequence of Centralized Money and Power

Technologies such as the blockchain are enabling alternative ways of creating and distributing money outside central banks and states.

If we don't change the way money is created and distributed, we will never change anything. This is the core message of my book A Radically Beneficial World: Automation, Technology and Creating Jobs for All.

Here is a depiction of wealth in the U.S.:

Here is my description of how centralized money and finance inevitably creates debt-serfdom as its only possible output: 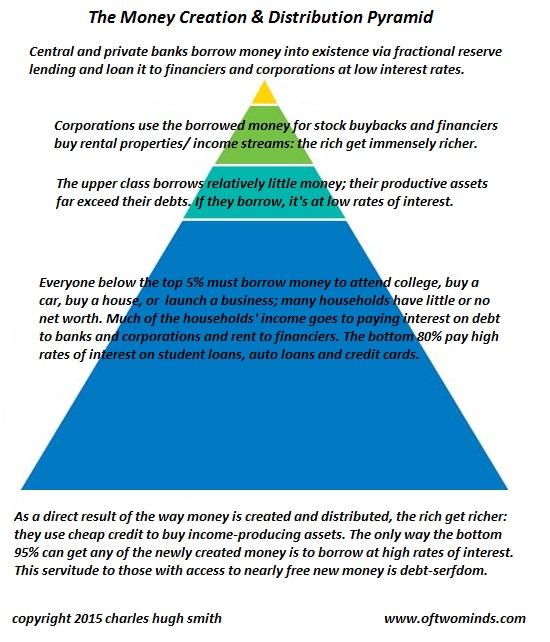 Once the creation and distribution of money is centralized, the corruption of political power is inevitable, as wealth can always buy political favors, such as tax evasion schemes.

Concentrations of private wealth and the central state are simply two sides of the same coin. Private wealth, monopolies and cartels are all protected and enforced by the state/central bank: the status quo exists to protect the privileges of the few at the expense of the many.

As long as central banks create and distribute money to banks, which are free to use the money for speculation and lend vast sums at near-zero rates of interest to corprorations and financiers, nothing can possibly change.

Recall that the central state enforces moral hazard: if banks reap vast profits on their gambles, they keep the winnings and can use a sliver of this wealth to buy political favors from politicos like Hillary Clinton.

If they lose the bets and are insolvent, the federal government and the central bank (Federal Reserve) bail them out by transferring the losses to the public or by rigging the system to funnel cash to the banks via paying interest on deposits held at the Fed (while slashing interest income to the serfs to near-zero).

There is another way to run the world: if money is decentralized, i.e. created by a distributed, decentralized system that pays people directly for their labor, rather than being distributed to banks to lend at interest, the sort of concentrations of wealth, power and exploitation enabled by central banking would no longer be possible.

Technologies such as the blockchain are enabling alternative ways of creating and distributing money outside central banks and states. I describe a labor-backed crypto-currency in my book A Radically Beneficial World. The potential of the blockchain to disrupt and bypass central banks' monopoly of money creation is revolutionary, which explains why Goldman Sachs and their cronies are desperate to own their own versions of blockchain technologies.

But the cats are out of the bag, and central bankers and their cronies will have a difficult time herding these new technologies back into the enforced serfdom of central banking. The only way to bring down the corruption created by the concentration of wealth and power is to dismantle the monopoly of money creation held by central banks and their private-bank cronies.

The Future of Money