The Status Quo Has Failed and Is Beyond Reform

The truth is the usual menu of reforms cant stop this failure, so we have to prepare ourselves for the radical transformations ahead.

That the status quo--the current pyramid of wealth and power dominated by the few at the top--has failed is self-evident, but we can't bear to talk about it. This is not just the result of a corporate media that serves up a steady spew of pro-status quo propaganda--it is also the result of self-censorship and denial. 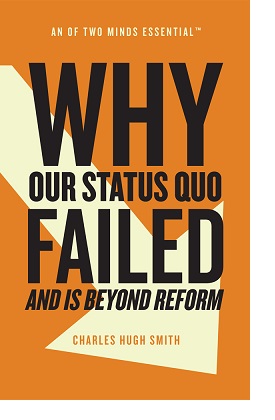 Why do we avoid talking about the failure of the status quo? We know it is beyond reform, and we're afraid: afraid that the promises of financial security cannot be kept, afraid of our own precariousness and fragility, and afraid of what will replace the status quo, for we all know Nature abhors a vacuum, and when the status quo crumbles, something else will take its place.

We all prefer the comforting promises of vast central states. No wonder so many Russians pine for the glory days of the Soviet Union, warts and all.

But the central bank/state model has failed, and history can't be reversed. The failure is not rooted in superficial issues such as which political party is in power, or which regulations are enforced; the failure is structural. The very foundation of the status quo has rotted away, and brushing on another coat of reformist paint will not save our societal house from collapse.

Yet those who benefit from our status quo (or hope to benefit from it upon retirement) naturally deny it has failed, for the reason that it has yet to fail them personally.

So we pretend to not understand that all unsustainable systems eventually collapse, and hope that the next central bank policy--negative interest rates, or bank bail-ins or helicopter money--will postpone it.

But the writing is already on the wall for us to read: these are the tell-tale signs of systemic failure leading to systemic collapse:

But the failure runs even deeper: Our status quo is not only failing to solve humanitys six core problems-- it has become the problem.

Why cant our status quo be reformed? There are two primary reasons:

1) Those benefiting from the current arrangement will resist any reforms that threaten their share of the pie--and meaningful reforms will necessarily threaten everyones slice of the pie.

2) Reforms that actually address the structural flaws will bring the system down, as the status quo can only continue if its engine (permanent expansion of debt and consumption) is running at full speed. Once the engine stalls or even slows, the system collapses.

This is unwelcome news not just to privileged insiders--and the harsh reality is that our status quo exists to protect the privileges of the few at the expense of the many--but to everyone who hopes to benefit in some way from our status quo's cornucopia of promises.

So we cling to the dangerous hope that all the promises can be met by some future magic, and cocoon ourselves in an equally dangerous denial that collapse is inevitable. We don't just want to avoid the decay and collapse of all the happy promises--we want to avoid the responsibility of taking part in shaping the replacement system.

We all want to wallow in the false security of one form of the old Soviet Union or another. Call it Japan, or the Eurozone, or the U.S.A., or Russia, or the People's Republic of China--they're all versions of the doomed Soviet model of central planning, propaganda and supression of anything that isn't supportive of the status quo, i.e. dissent.

The truth is the usual menu of reforms cant stop this failure, so we have to prepare ourselves for the radical transformations ahead. The decay and collapse of our status quo is not the disaster we assume; rather, it is good news for the planet and everyone who isn't in the privileged elites, as the collapse will clear the way for a much more sustainable decentralized system that is already visible to those who know where to look (crypto-currencies, local community economies, etc.).

My own proposal for a replacement system is called CLIME--the Community Labor Integrated Money System. Whether you agree with my proposal or not, the point is that we have to wake up from our propaganda-induced slumber and take responsibility for being part of the solution rather than passively clinging to the problem, i.e. our status quo.

You can find our more about Why Our Status Quo Failed and Is Beyond Reform ($3.95 Kindle ebook, a 20% discount thru May 1, $8.95 print edition) on the book's website. The book is #3 on Kindle short reads -> politics and social science.