In case you missed it, The Washington Post's criminally careless publishing of "fake news" about purported "Russian propaganda" created a backlash--and the Post's attorney-approved bleating to sidestep responsibility for publishing "fake news" failed to calm the waters.

The "experts" claims of expertise were not validated or investigated by the Post, and the Post prominently linked to a list of 200 websites (oftwominds.com among them) that purportedly "wittingly or unwittingly" promoted "Russian propaganda"--but The Washington Post did zero journalistic work to investigate the list or the anonymous "experts" that published it.

Since the list is bogus, the entire story qualifies as "fake news"--exactly what the Post claims to be investigating. Talk about irony....

This criminally sloppy publishing of "fake news" isn't journalism--it's propaganda. No amount of slippery legalese can erase the fact that The Washington Post published a "fake news" story and featured it prominently on page one.

Let me explain the "methodology" behind the "Russian propaganda" list: guilt by association. Here's how this works. Say you're in a totalitarian state with a media controlled by a handful of state-corporate interests. (Sound familiar?)

You have lunch with a colleague who is an acquaintance, discuss kids' soccer and gripes about the boss, and you go home, thinking nothing of it.

Neither the "fake news" publishers of the list nor The Washington Post combed through the thousands of pages of blog posts on my site and identified those purported to be "Russian propaganda." They didn't bother, because, well, that would have taken some serious journalistic work.

It doesn't take much of a dose of cui bono (to whose benefit?) to grasp that state-owned and operated media (even if it is at arm's length to maintain a claim to "journalism") aim to paint the issuing state in rosy hues while publicizing the woes of its rivals.

Even the most dimwitted mainstream media "journalist" grasps this obvious fact. The rest of us certainly do.

So let's extend The Washington Post's shoddy "fake news" methodology just a bit, to the sources of oftwominds.com's "Russian propaganda." Since oftwominds.com's content relies on statistics from these three websites, clearly they are guilty by association. 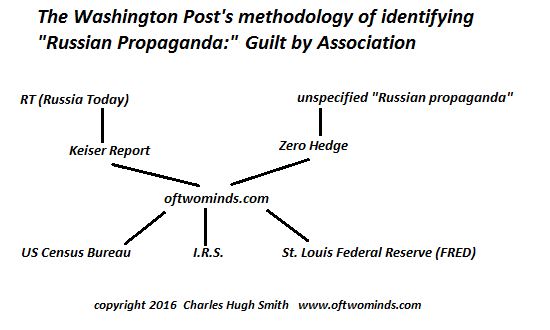 This is the logic of totalitarianism--guilt by association. Just in case you haven't seen the dozens of charts I use in my "Russian propaganda" from the St. Louis Federal Reserve (FRED), take a gander at this:

My analysis on Why We Keep Getting Poorer: High-Cost Housing is totally dependent on data drawn from the US Census Bureau website.

Sorry, U.S. Census Bureau, I.R.S. and St. Louis Federal Reserve--you're issuing "Russian propaganda" according to The Washington Post's shoddy "fake news" methodology. Your data enabled oftwominds.com and other independent journalist sites to issue content that was skeptical of official claims that are endlessly parroted by a bought-and-paid-for corporate media.

Oh, and in case you didn't get the definition of "Russian propaganda:" it's anything that is skeptical or critical of America's ruling elite and its corporate-media shills. Remember: America's ruling elite is so wonderful and our prosperity is so fantastic that domestic dissent is impossible. Any dissent must be the work of foreign devils.

And that's why we're now swimming in the raw sewage of The Washington Post's "fake news".