The reason why we're poorer: more of our income goes to housing than it did 35 years ago.

Simply put: housing costs have far outpaced household incomes over the past 35 years, making the high cost of housing the primary driver of declining discretionary income: what's left after paying taxes and housing.

You might want to refill your coffee or tea cup because we have to slog through some potentially confusing numbers to root out the truth.

There is information in the difference between median income and mean/average income.

Median is the number at the 50% line, e.g. first half of households earning less than the median household income and the other half earning more. ( wikipedia on median/mean)

Mean income (average) is the amount obtained by dividing the total aggregate income of U.S. households by the number of households.

Why the big difference? The higher income households earn a much greater income that the lower 4/5 of households. That preponderance of income in the top 5% and top 20% causes the average income to be much higher than the median.

The Census Bureau divides the households into quintiles--20% each, with a special category for the top 5%. (income by quintile.)

The numbers are remarkable. I am not making a judgment here, i.e. that incomes "should be" different from these facts; we all know wages for low-skill jobs have stagnated while high-pay, low-skill factory positions have declined due to global wage arbitrage and broad post-industrial trends.

Nonetheless, it is clear that the vast majority of income increases have accrued to the top 20% and top 5%. Here are the numbers, adjusted into 2001 dollars (data ends at 2001):

Now let's move on to look at housing. Our statistics are once again drawn directly from U.S. Census Bureau data: median house prices 1975-2009.

The lower 3/5 of the households were completely blown out of the water by housing's 90% rise; obviously, their ability to afford a house was essentially destroyed by this asymmetric rise in the cost of housing.

I want to note that all these numbers are adjusted for inflation; they are all "apples to apples."

Clearly, housing affordability had already dropped substantially from 1960 to 1975.

However you want to slice it, housing costs substantially more in terms of income than it did 35 years ago.

While the final Census Bureau numbers are not yet available, private data suggests median income dropped in 2009 as the recession took hold, returning household incomes to 1997 levels. (Source: davemanuel.com)

To all those who believe demand for housing will soon exceed supply, recall that the Census Bureau counts almost 19 million empty dwellings in the U.S. even as foreclosures are slated to reach 4 million in 2010.

A decline to the 3-to-1 ratio of income to price fits in with my projection for housing bubble symmetry: 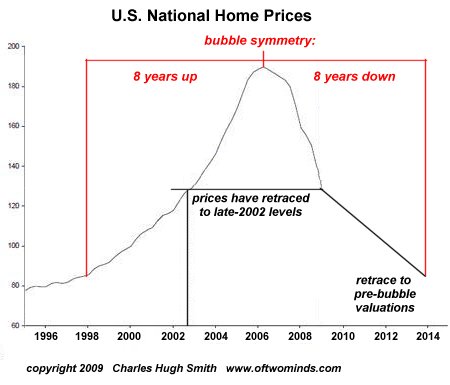 Here is a pie chart of wealth distribution/ownership: