Should the Federal Reserve Stop the Dominoes From Falling?   (January 27, 2014)


The forest (the economy) can only remain vibrant and healthy if the dead wood is burned off in bankruptcy and insolvency. Retail commercial real estate is over-built and over-leveraged. If it is allowed to burn off as Nature intended, we can finally move forward.

Last week I suggested that Retail-CRE (Commercial Real Estate) would be The First Domino to Fall in the domestic U.S. economy. The reason is simple supply and demand: for a variety of structural reasons, there is an enormous oversupply of retail commercial space and an ever-declining demand for bricks-n-mortar commercial space.

I laid all this out in a three-part series last week:

I've prepared a graphic depiction of dominoes falling that depicts the causal chain: 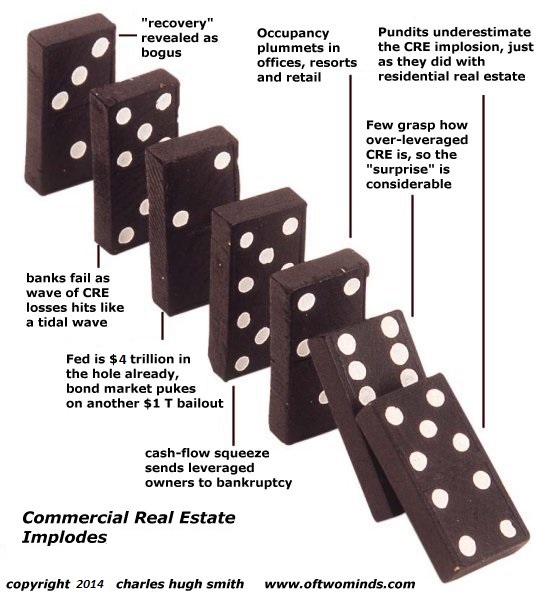 1. Standard-Issue Financial Pundits (SIFP) underestimate the CRE implosion, just as they underestimated the domino-like consequence of subprime residential mortgages blowing up in 2007-2008.

2. Few grasp how over-leveraged CRE is, so the "surprise" will be considerable, i.e. the shock-and-awe of malls being recognized as near-worthless will be outsized.

5. The Fed may want to add $1 trillion in impaired commercial real estate mortgages to its bloated $4 trillion balance sheet, but the bond market may question yet another open-ended bailout of the Fed's cronies, i.e. the banks who foolishly lent monumental sums against marginal commercial properties.

7. The "recovery" in the U.S. economy is revealed as just another fiction sold as fact by the Fed, the political Status Quo, the organs of Federal propaganda, etc. (The Recent "New High" in Stocks Is as Bogus as the Unemployment Rate January 25, 2014)

Here's the key issue at stake: propping up failed private enterprises with Fed or Federal money throws up roadblocks to the real growth of our economy. Rather than bail out more banks and save over-valued, over-leveraged mall owners from the consequences of the economy changing, we should be casting off what's been holding the economy back--phantom assets, debt that should be written off and failed financial sectors bailed out with taxpayer funds and Fed trickery.

We may as well ask if the Fed should have bailed out the buggy whip industry in 1914. The retail-CRE sector is imploding for a very good reason: speculators built way too much space with way too much credit and leverage supplied by banks emboldened by the notion that the Fed will never let crony-capitalists suffer the consequences of their insanely risky bets.

On top of that cheap-credited-fueled over-building, Web shopping and the systemic decline in household income for the bottom 90% (please look at the income charts in The First Domino to Fall) have undercut the need for ever-more commercial real estate space.

In any economy with the slightest bit of free enterprise still left breathing, the retail CE sector would be allowed to go bankrupt and all those exposed to the risks (mall owners, banks with CRE loans, etc.) would absorb the losses. Anything less than the creative destruction of a failed sector that time has passed by will impede the economy in terribly negative ways.

Yes, the Fed can print up another $1 trillion and buy every CRE loan that's worth $1 for $1 million and bury the defaulted loan away from public view. But should it be allowed to do so? Should the Fed's role of savior of every crony-capitalist in America who loses a leveraged bet go unchallenged?

Should the Fed end up owning every dead mall in America so the owners and lenders can be cashed out at a fat profit? Janet Yellen, the Nation's New Chief Slumlord (January 9, 2014)

Should the Fed be allowed free rein to bail out its owners (private banks) and crony capitalists with limitless newly created money? Is that what the U.S. is all about now, bailing out failed speculative bets by crony capitalists and banks? Most commentators believe the Fed has a totally free hand to create as much money as it wants whenever it wants and to use those funds to bail out banks and speculators by buying their defaulted mortgages and hiding them away in the Fed balance sheet.

But I believe the political resistance to this neofeudal arrangement is rising, and the Fed's ability to bail out crony capitalists and banks is not as infinite as its supporters believe. The bond market might start pricing in negative consequences to the Fed floating yet another $1+ trillion bailout of super-wealthy cronies.

Maybe the public will finally tire of yet more bailouts of the super-wealthy and their failed sectors and failed bets. Maybe the Nation's New Chief Slumlord, Janet Yellen, will hesitate to pursue Ben Bernanke's policy of bailing out every failed crony capitalist regardless of the costs to the nation's economy and the injustice of backstopping foolish risks made for private gain.

"It can't happen here" includes the Fed. The average SIFP (Standard-Issue Financial Pundit) believes the Fed is politically unconstrained as a matter of unquestioned fact, on the order of a belief in a Cargo Cultish quasi-religion such as Keynesian "stimulus." (Wow, Paul Krugman can really dance the humba-humba and wave a dead chicken!)

Just as it turns out "it can happen here" (runaway central state suppression, spying, etc.), the Fed can encounter political limits on its Grand Plan of bailing out every crony capitalist in America.


A sincere thank-you to the 88 readers who responded to One Blogger's Story About Money (January 18, 2014) by subscribing or contributing to the site. Your kind support is greatly appreciated.