Bernanke Blew It Big-Time: He Should Have Raised Rates Three Years Ago

Bernanke blew it big-time, letting the "recovery" run seven years without any significant increase in rates.

It is now painfully obvious that Ben Bernanke blew it big-time by not raising rates three years ago when the economy and markets enjoyed tailwinds. The former Federal Reserve chairperson, who has claimed the mantle of savior of the global economy, foolishly kept rates at zero until tailwinds turned to headwinds, at which point he handed Janet Yellen the unenviable task of raising rates as the headwinds are strengthening.

Ben Bernanke is not the savior who rescued the global economy; he is the clueless fool who plunged a poisoned knife in its back. After weathering the spot of bother in Euroland in 2011-2012, the global economy had multiple tailwinds in 2013--tailwinds that enabled Bernanke and the Fed to raise rates in a series of measured steps. 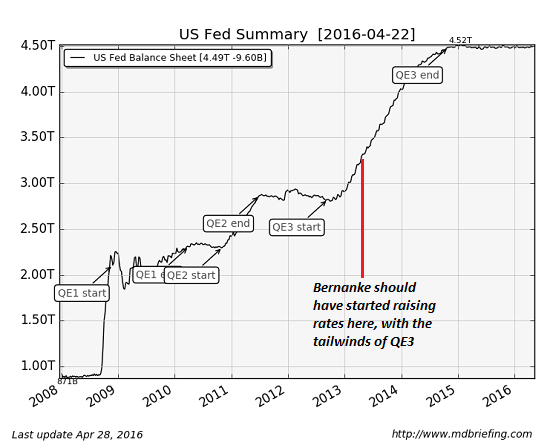 Tailwind #2: the yield curve spread had bounced off its 2012 low: 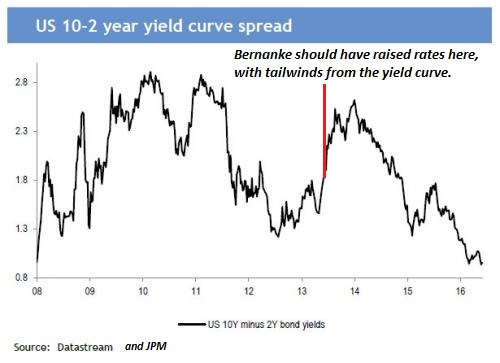 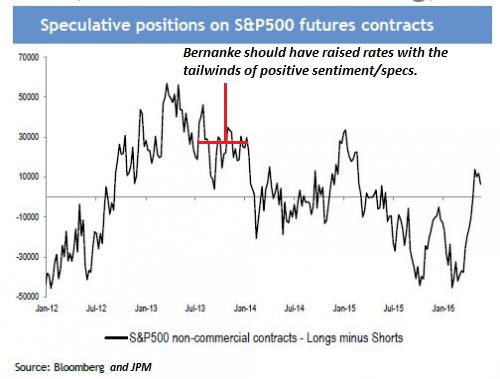 Tailwind #4: China's economy and appreciation of the yuan had not yet weakened: 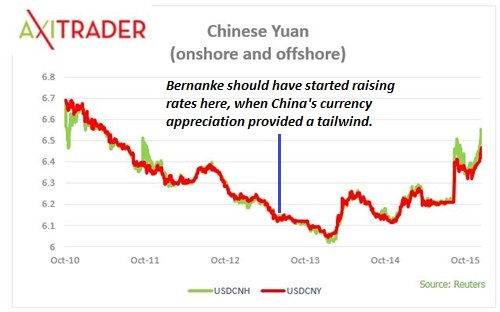 What else did The Bernank want in mid-2013--an infinite line of credit with the Central Bank of Mars? He had literally every tailwind a central banker could want to support higher interest rates--especially rates that could have clicked higher by tiny .25% increments.

Instead, Bernanke blew it big-time, letting the "recovery" run seven years without any significant increase in rates. Now that the "recovery" is in its eighth year, it's starting to roll over. All those tailwinds have reversed into headwinds, especially China, which has seen the RMB (yuan) strengthen by 20% as its currency peg to the U.S. dollar has dragged it higher.

As I explained in Why the Fed Has to Raise Rates (December 4, 2015), the U.S. dollar serves two sets of users: the domestic U.S. economy and the international economy that uses the USD as a reserve currency.

While the Fed poo-bahs are constantly spewing propaganda about how the Fed serves Main Street (well, it does serve Main Street in a manner of speaking--as a tasty snack to Wall Street), the one absolutely critical mission of the Fed in the Imperial Project is maintaining U.S. dollar hegemony.

No nation ever achieved global hegemony by weakening its currency. Hegemony requires a strong currency, for the ultimate competitive advantage is trading fiat currency that has been created out of thin air for real commodities and goods.

In essence, the Fed must raise rates to maintain the U.S. dollar hegemony and keep commodities such as oil cheap for American consumers. The most direct way to keep commodities cheap is to strengthen one's currency, which makes commodities extracted in other nations cheaper by raising the purchasing power of the domestic economy on the global stage.

Another critical element of U.S. hegemony is to be the dumping ground for exports of our trading partners. By strengthening the dollar, the Fed increases the purchasing power of everyone who holds USD. This lowers the cost of goods imported from nations with weakening currencies, who are more than willing to trade their commodities and goods for fiat USD.

The loser as the USD strengthens is China, which must devalue its currency or de-peg its currency from the USD to preserve its export-sector competitiveness. Anything that could disrupt China's fragile economy, credit expansion and capital flows is a global worry, and Bernanke blew it big-time by not raising rates when global growth was still a tailwind.

Now that the tailwinds have become headwinds, the global economy is like a cracked glass teetering on a fence post in a rising storm. Every move in interest rates has immediate consequences in currencies, bond yields and capital flows, and each of these winds has the potential to topple the increasingly fragile global economy into recession--or worse.

Ben Bernanke blew it big-time, not just for America, but for the world. This reality cannot be dismissed as the luxury of hindsight; it was clear to many observers that after four years of recovery, it was time to start raising rates in 2013. Leaders must lead; if the Fed chair is so weak-kneed that he/she must ask the market's permission for every decision, that's not leading--it's following a short-term profit-obsessed liquidity junkie off the cliff.