An Everyman's Guide To Understanding Cryptocurrencies

Cryptocurrencies have a role that could increase as global currencies are devalued.

When an asset doubles in a matter of a few months, it tends to attract attention.  The cryptocurrency Ether (part of the Ethereum platform) doubled from around $7 in April to roughly $14 in early June.

Are these cryptocurrencies mere fads? Or are they potentially game-changing alternatives to the conventional currencies such as the U.S. dollar, Chinese RMB, Japanese yen or European Union euro?

There’s no lack of skeptics and critics of bitcoin and other cryptocurrencies. For example, “National currencies aren’t as Centralized, and Bitcoin isn’t as Decentralized, as you think.” (Source)

There are plenty of defenders of cryptocurrencies as well, for example this response to the article above.

The controversy is understandable; bitcoin has had a difficult adolescence. After soaring from $15 in early 2013 to over $1,000 in December 2013, the cryptocurrency crashed to $215 in early 2015 in the wake of the bankruptcy of a major exchange (Mt. Gox) that cost bitcoin investors $470 million in losses.

Yet despite concerns about security, criminal use and volatility, cryptocurrencies have proliferated at a dizzying pace, and new models such as the “smart contracts” of Ethereum have been developed.

So what are those of us who can’t follow the technical arguments supposed to make of all this? For that audience, here's my stab at making sense of the potential global role of cryptocurrencies.

Cryptocurrencies Are Digital Currencies That Are Not Issued by Governments

What’s a cryptocurrency? Wikipedia’s definition is “a medium of exchange using cryptography to secure the transactions and to control the creation of new units.” Cryptocurrencies exist only in the digital realm; there are no physical coins or paper notes.

Cryptocurrencies have no intrinsic value. They share this characteristic with fiat currencies issued by governments/central banks:

“Fiat money is currency that a government has declared to be legal tender, but is not backed by a physical commodity. The value of fiat money is derived from the relationship between supply and demand rather than the value of the material that the money is made of. Historically, most currencies were based on physical commodities such as gold or silver, but fiat money is based solely on faith. Fiat is the Latin word for “it shall be.” (Source)

Though major central banks own gold, the currency they issue is not “backed by gold,” i.e. it cannot be converted into gold upon demand.

The value of fiat currency is a function of supply and demand. There are many sources of demand for currency: governments demand taxes be paid in their fiat currency, for example, and this creates demand for the currency.

There is however only two sources of supply: the central banks of nation-states (or regional unions like the Eurozone) and private banks in fractional reserve money systems that enable banks to create new money via issuing new loans.

In a fractional reserve banking system, if a bank has $10 in cash deposits (i.e. in reserve), it can issue a new loan of $100. This loan is new money that was created out of thin air. When the loan is paid in full, this new money disappears from the system.

When central banks or states issue new currency in excess of what the economy is actually producing, the supply overwhelms demand and the currency’s value (i.e. purchasing power) falls accordingly. Venezuela offers a present-day example: the official exchange rate of the Venezuelan bolivar is 10 to the U.S. dollar (USD), but the “street”/black market value is closer to 1,000 to 1 USD. (My correspondents in Venezuela report that it is illegal to post the black-market exchange rate on a website.)

Governments typically restrict alternative currencies to protect their monopoly on money issuance: residents must use the government-sanctified currency or face prosecution and prison.

The U.S. government has declared bitcoin is a commodity (i.e. property) rather than a currency. Other nations have banned bitcoin (presumably out of recognition that it is an alternative currency outside their control.)

Why does bitcoin have any value at all? There are two basic reasons:

1. The supply is limited.  The design of bitcoin limits the total number of bitcoins to 21 million. (If you really want to know why this is so, you’ll need to understand the blockchain and bitcoin mining, topics that are beyond the scope of this article.) At present, there are over 15.5 million bitcoins in circulation, roughly three-quarters of the eventual issuance of 21 million.

Why Fiat Currencies Are Being Devalued

Why do governments/central banks pursue a policy that makes their citizens poorer?

There are two primary reasons why governments seek to devalue their currency:

1. To make the nation’s exports cheaper, i.e. more competitive, in the belief that expanding exports will make the overall economy grow, despite the fact that devaluing the currency makes imports more expensive, hurting everyone who buys imports.

As their currency is devalued (by intention or by unintended consequences), the great problem for many people will be transferring their remaining financial wealth out of depreciating currencies into a more stable currency or into assets in a more stable nation.

The Role of Cryptocurrencies in Capital Preservation

What advantage do cryptocurrencies have over other stores of value such as gold, silver or cash? All of these traditional stores of value have advantages—portability and universal recognition that they are money—but they cannot be transported across the globe quite as easily as digital currencies.

Though it is a topic of hot debate, many observers believe it is technically difficult to the point of impossibility to stop people from buying, selling and sending cryptocurrencies because currencies such as bitcoin live in a network that is scattered around the globe—a network that can be accessed by anyone with a web browser.

The rise in daily transactions in bitcoin suggests an expanding base of users globally. 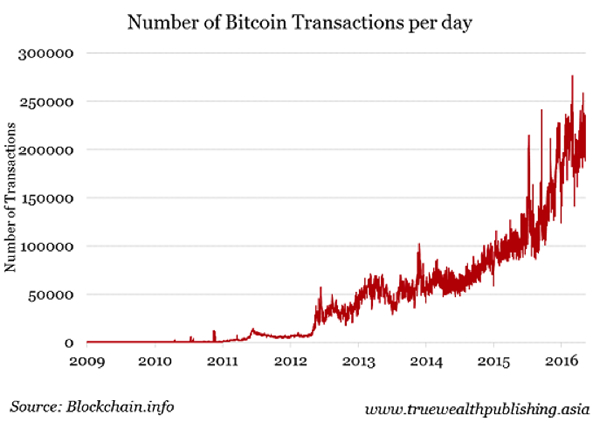 As governments actively devalue their currencies (thereby making everyone using the currency poorer), their citizenry with financial capital are forced to seek ways to move their at-risk wealth into other currencies or assets. And as the stability and valuations of cryptocurrencies increase, the potential for a self-reinforcing feedback loop increases: as the value of cryptocurrency rises, it attracts more capital, which pushes prices higher, and so on.

Are we in the infancy of a global stampede into cryptocurrencies?

This essay was first published on June 10 on peakprosperity.com, where I have been a contributing writer since 2011.


My new book A Radically Beneficial World discusses the potential for labor-backed cryptocurrencies at length; if you're interested in cryptocurrencies, you may find the idea worth exploring.