If You Want More Jobs and More Job Stability, Disrupt More, Not Less

Reducing disruption to protect the privileged status quo is akin to poisoning the patient to "protect them from harm."

I've addressed the dynamic mix of technical and entrepreneurial skills, social and financial capital and infrastructure of opportunities required to successfully navigate this transformation in my books Get a Job, Build a Real Career and Defy a Bewildering Economy and The Nearly Free University and the Emerging Economy: The Revolution in Higher Education.

Here's the problem in a nutshell: job growth, new businesses and wage gains are becoming increasingly concentrated in a small number of geographic regions and a narrow class of workers / entrepreneurs while the overall economy struggles to maintain productivity gains, which are ultimately the only sustainable source of prosperity.

the productivity growth rate has been slumping since 2005. 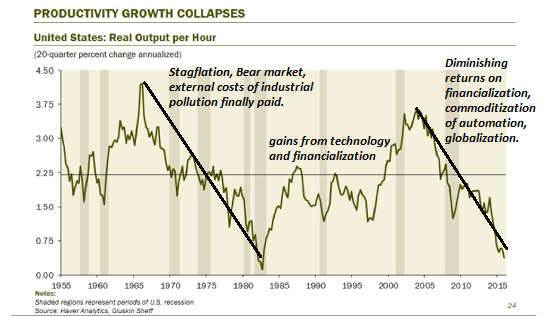 Longer term, productivity gains have flowed to the top 5%--those workers and entrepreneurs with higher levels of education, ownership of assets and access to cheap credit: 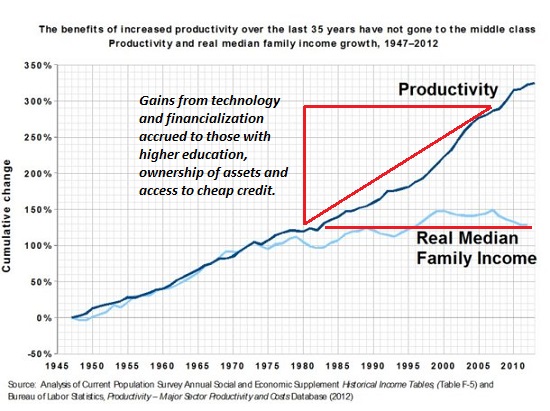 This chart shows the concentration of income in the top tier: the top 5% have garnered the gains while the incomes of the bottom 95% have stagnated.

The overall employment picture has changed for the worse: the percentage of the populace that's employed has fallen from peak periods. 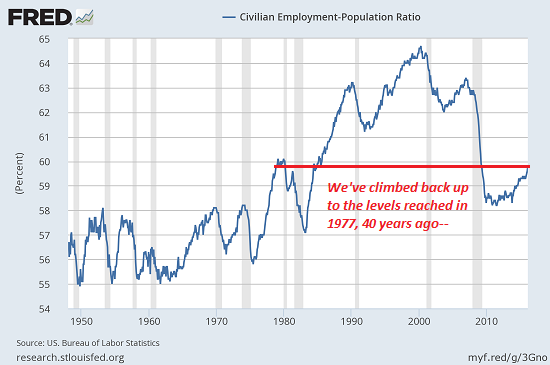 The number of workers with full-time jobs has stagnated in the 2000s, breaking a 50-year trendline of steady growth of full-time jobs. 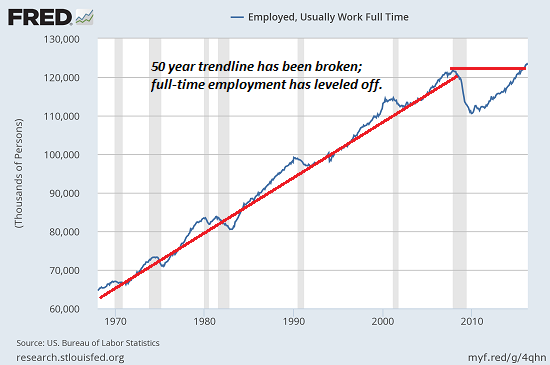 The growth of new businesses (annual change in the number of firms) has also cratered: business creation never recovered in the "recovery." 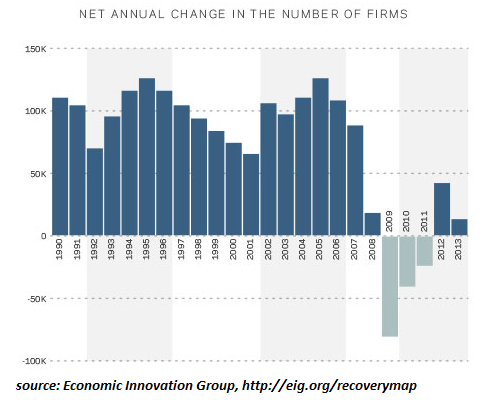 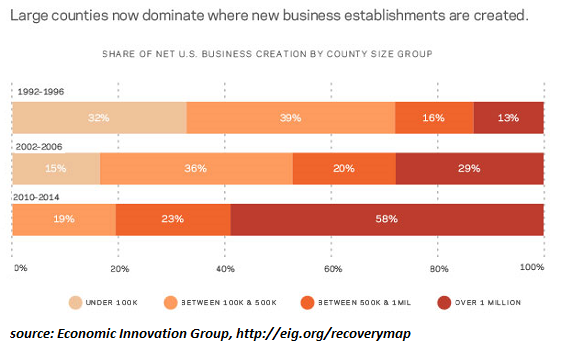 The point of The U.S. Labor Market Is Far More Stable Than People Think is that disruption generates more stability in the job market, not less. The obvious stagnation of employment and wages for the majority of workers has created a feeding-frenzy of potential explanations and causes, and this has led to all sorts of proposed policy tweaks.

The point here is: if you want growth and stability, disrupt more, not less. The vast majority of policy tweaks are ultimately aimed at protecting privileged classes from disruption and reducing disruption of the status quo--in government, higher education, healthcare, defense, etc.

Reducing disruption to protect the privileged status quo is akin to poisoning the patient to "protect them from harm." The only way to successfully navigate a rapidly transforming economy is to embrace disruption by making it easier and cheaper to disrupt the protected status quo.

In my book The Nearly Free University and the Emerging Economy: The Revolution in Higher Education, I lay out a blueprint for reducing the cost of college by 90% while greatly improving the value of that education.

It's Time to Ditch 4 Years of Costly College for Directed Apprenticeships (June 2, 2016)

One reason why jobs and entrepreneurial are increasingly concentrated in counties with high densities of population and capital is these locales possess the infrastructure of opportunity I describe in my book Get a Job, Build a Real Career and Defy a Bewildering Economy-- the traits author Eric Weiner explored in his book The Geography of Genius: A Search for the World's Most Creative Places from Ancient Athens to Silicon Valley.

I have often discussed the cultural capital and decentralized, dynamic models this great transformation favors, for example: Flexible Labor Is the Future (June 1, 2016)

In essence, we have a choice: 1) try to freeze history in its tracks, so those who are currently privileged remain privileged. This will slowly strangle the economy and increasingly concentrated gains in the hands of the few. Or 2) embrace disruption of the status quo as the only path to widespread prosperity and stability.