Is the Market Rational After All?

This is the market we have now: dominated by delusional, irrational central planners with unlimited powers to create money out of thin air to fund their manipulations.

For the past decade, attempts to explain the psychology of markets have been dominated by behavioral economics: rather than being rational actors as presumed in classical economic models, humans are often profoundly irrational and prone to cognitive distortions and errors that render their choices anything but rational.

Even the wisdom of crowds--that in aggregate, crowds make better decisions than individuals--is being questioned.

Ironically, while the clinical focus has been on individual irrationalities and frailties, markets have been increasingly controlled by a handful of central planners: central banks and state authorities who are intervening in supposedly free markets (i.e. outright manipulation) to an unprecedented degree.

Central banks are buying trillions of dollars, yuan, yen and euros of assets such as mortgages, sovereign bonds, corporate bonds and stocks to prop up markets in these assets as a means of generating confidence and positive sentiment, and suppressing any downturns by selling volatility (the VIX index).

The VIX (volatility) and the stock market are on a see-saw: as volatility leaps higher, markets sell off, and as volatility declines, complacency enables markets to drift higher.

The VIX has been monkey-hammered lower for months. Every time volatility (as reflected by the VIX) starts creeping up into the danger zone, it is sold, effectively pushing the index back down to "safe" complacency ("no worries, mate") levels. 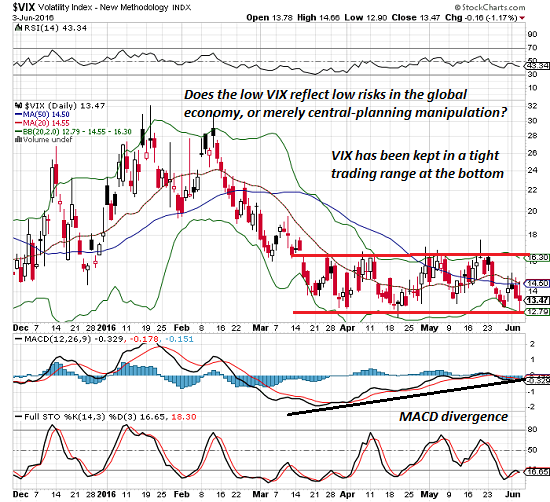 Only an irrational person who wanted to be fired would repatriate billions of dollars in overseas profits to the U.S. and pay 35% in corporate taxes. The only rational response to this disincentive is to find ways to funnel this money into corporate buy-backs that enrich CEOs and other top managers. To do otherwise would be irrational.

if central banks (i.e. central planners) have made it abundantly clear that they will intervene to keep markets aloft, regardless of cost, then the only rational response is buy the dips because central planners will stick-save markets from any panic declines and then push them to new heights.

If central planners routinely hammer volatility down with huge selling, then the only rational response is to align your trades to profit from this ever-present intervention.

This is the market we have now: dominated by delusional, irrational central planners with unlimited powers to create money out of thin air to fund their manipulations.

The only rational response is to trade accordingly: anticipate constant manipulation, anticipate constant bombastic propaganda of the "whatever it takes" variety, and anticipate massive selling of volatility to maintain the ever-so-important illusion that global risks have been disappeared by central banks and central planners.

Until the central planning madness destroys markets' ability to discover price and allocate capital. Then you end up with Venezuela: a failed state and a broken economy that can no longer feed its people despite the nation's vast oil wealth.

In a world roiled by staggeringly large risks, can VIX be suppressed forever? That's a difficult question in a market dominated by irrational central planners.