It wasn't too long ago (a year?) that an analyst who called for $100/barrel oil was accused of fear-mongering/sensationalism. To illustrate just how flat-footed analysts have been, here is a chart from an early 2006 article in Barrons which anticipated oil staying below $100/barrel all the way through 2011.

Exactly what's stopping the price from climbing to $300/barrel by 2010? The standard answer is "demand destruction," i.e. people will drive less, fly less, car-pool, etc. as the the price increases past some "threshold of pain."

To most observers' surprise (me included), the rise of oil from $60/barrel to $120/barrel has barely dented demand for gasoline, jet fuel, electricity, etc.

So where is the "threshold of pain"? Clearly, a lot higher than $130/barrel and $4/gallon for gasoline. Frequent contributor Michael Goodfellow recently pointed me to this chart of inflation-adjusted gasoline prices going back nearly a century, and the accompanying commentary: Inflation adjusted Gasoline Prices Above all time highs (Inflationdata.com) 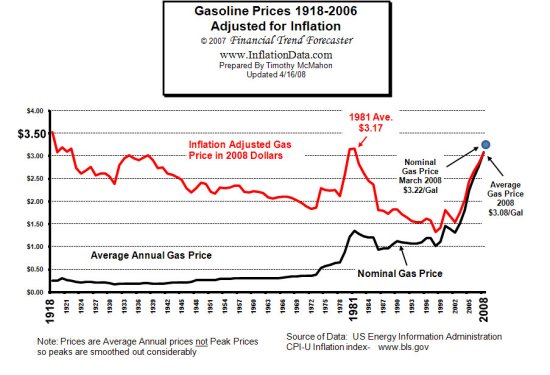 Here are excerpts from the commentary:

Obviously if that was the average some people were paying much more. Adjusting this for inflation we get an average inflation adjusted price for a gallon of gasoline in 1981 of $3.17 in March 2008 dollars.

Unfortunately, way back in 1918 when Gasoline was a luxury item and people still rode horses as their means of transportation... gasoline in inflation adjusted terms was about $3.50 a gallon.

It would seem that the price point which will trigger behavioral modifications in gasoline/jet-fuel/diesel demand is quite a bit higher than $4/gallon. So what is that "threshold of pain"?

Frequent contributor U. Doran recommended two articles on the subject:

OIL SHOCK AND ENERGY TRANSITION (Andrew McKillop) and Thoughts on Demand Destruction: Where Is It? (The Oil Drum).

In the first piece, the author supports the notion that price doesn't really lower demand-- only recession does that. The second commentary offers evidence that the price jump to $120/barrel has hardly affected demand, though there may be a lag-time between the price and the behavioral changes it triggers, such as buying more fuel-efficient vehicles.

Michael Goodfellow offered these comments on prices and demand:

The counter arguments for me on oil prices are: 1) Europe has been putting up with prices double ours for years. It hasn't crashed their economy. You just get lots of smaller cars. 2) Since we drive so many SUV's and other low-mileage vehicles, we have plenty of slack to pull in. Someone driving (like me) a 15mpg vehicle could switch to one of those high-mileage diesels or city cars and cut our fuel consumption by 2/3. Back to $1.50/gal gas, in effect. There are a lot of people who've started to do exactly that, by buying new or used compacts and trying to sell the gas guzzlers.

This all happened before in the 70's, remember. The 80's saw lots of small cars. It will happen again.

If government wants to help, they can slash the building permit process for inner cities, and actively remove the eyesores that drop property values, instead of "preserving" them. And do whatever else it takes to make cities competitive with the suburbs in terms of price and convenience. Then we wouldn't have to drive so much.

In support of Michael's observation about prices in Europe, I have read accounts that demand in the EU is essentially unchanged despite $8/gallon prices on the continent and $10/gallon prices in the U.K. Undoubtedly some incremental conservation efforts are underway, but the response globally appears to be more or less a shrug and a sigh, and the cutting of some other expense in order to fill the tank.

On the other hand, a deep, prolonged global recession will cut demand. History circa 1980-83 certainly supports this expectation. Commentator Downsouth observed on the Oil Drum thread:

An 11-fold increase in oil price and an eventual 13.5% decrease in cosumption.

Here are some observations about demand and price.

1. In the last serious recession of 1980-83, as oil rose from a relative low to a relative peak (see chart above) gasoline prices approximately doubled.

2. Did the price increase cause the recession? The most plausible answer is no, the recession was caused by macro-economic ills: stagflation, high inflation and then skyrocketing interest rates which suppressed borrowing--the lifeblood of the U.S. economy. Demand fell not from price but because 15% of the U.S. was unemployed and businesses were losing money.

4. What could possibly cause demand to fall significantly globally, say between 10% and 15%? The same thing which caused the 13.5% decline in the early 80s--recession. As I have suggested here for years (as have many others), the global economy is ripe for a deep, prolonged recession as the unprecedented financial excesses of the past 25 years get worked off.

Demand destruction has a simple cause: some well-paid person loses their job. No more corporate meetings to attend, no commute, etc.

5. The "low hanging fruit" of job arbitrage/offshoring has been picked. The coming recession won't gut manufacturing--now a mere 9% or less of the workforce--it will gut the middle-class positions because that's all that's left to cut. All the low-paying jobs except janitorial services, retail and leisure/hospitality have already been shipped overseas.

So yes, lower-paying jobs will be axed, but perhaps for the first time in 25 years, so will middle-class positions. Consider that 75-80% of all local government expenses are for labor/benefits. As tax revenues fall quarter after quarter and year after year, where else can government trim expenses except payroll? A lot of well-paid positions will have to disappear in the process of "living within our means."

6. How low could oil fall in a deep global recession? Let's think though some possible factors which would influence demand and supply imbalances.

7. As Michael Goodfellow alluded to above, the U.S. has constructed an immense sprawl of suburbs and exurbs which require residents to use vehicles to get to work, school, markets, leisure activities, etc. The only way to fundamentally restructure that demand is to move millions of people from the suburbs into or near the cities. Yet long-standing forces of NIMBYism (not in my backyard), greedy local governments demanding huge development fees and antiquated zoning codes all create resistance to increasing the density of low-density U.S. cities.

8. The other way to reduce demand in the U.S. is to stay home: either work from home (telecommute) or be unemployed at home. If 15 million people lose their jobs (out of about 133 million jobs, an effective unemployment rate of 11%, about the "official" rate in 1982) then demand will most certainly diminish.

In a recession, most companies stop making big profits. They have to cut expenses, and air travel is an obvious discretionary luxury in the vast majority of corporate situations.

9. The purchase of higher-mileage vehicles will have a very limited effect in the timespan of a few years. Here is somewhat dated U.S. fleet data (for the year 2000) from the Federal Highway Administration: The U.S. Vehicle Fleet. There are roughly 220 million light-trucks (pickups, vans and SUVs) and automobiles in the U.S. and sales are roughly 15 million units a year, evenly divided between the light truck family and autos.

This suggests that it would take about 15 years to turn over the entire U.S. vehicle fleet to higher-efficiency vehicles. In a recession, vehicle sales would drop considerably, significantly lengthening the time required to change over to a higher-mileage fleet.

10. Demand in China and India may well be far more elastic than Western analysts assume. The blistering growth of oil demand in China is repeated endlessly, yet those who recall China's roadways as recently as 2000 may wonder just how difficult it will be for most Chinese car-owners to park the recently-acquired car and pull out the old bicycles. Yes, those who bought McMansions in new Chinese suburbs will still have the need to drive a vehicle to get anywhere, but the number of these folks is tiny relative to China's population.

In city after city--Nanjing, Suzhou, etc. etc.--residents could get around quite easily just as they did 15 years ago--by bicycle. So to assume that demand cannot be destroyed by recession in China is if anything an even more precarious assumption than reckoning demand cannot go down in the U.S.

11. What about supply? As we all know--or at least those of us who follow energy do--Peak Oil has all but been announced by declines in oil production in Mexico, Russia, Norway and the U.K. (North Sea).

Yet as I have submitted here before, there are immensely powerful political forces which will attempt to boost oil production as demand falls and prices follow suit. Most oil exporting nations have constructed two pernicious structural impediments to reducing production:

a. massive gasoline subsidies to their own population, insuring rapid growth in demand and a net loss to the government, and

Politically, countries like Venezuela will have no choice but to attempt to raise production as prices fall in a desperate attempt to make up the shortfalls in politically essential government revenues. Ironically, this high production will only feed the price collapse.

Am I suggesting Peak Oil is not a reality? Far from it.

12. As the global economy totters and falls, the lowly U.S. dollar might stage a comeback as a relative "flight to quality." This certainly seems like a tenuous thesis at the moment, but history suggests that when the U.S. sneezes, the world economy catches a cold. A rising dollar would also act to suppress the (dollar-denominated) price of oil.

What I am suggesting is a gigantic head-fake in which global recession causes oil demand and price to plummet for a brief period. This will feed a resurgent complacency about Peak Oil, setting the world up for an unprecedented shock when the global economy and demand recovers. Here is a chart illustrating the thesis:

Plausible? Implausible? It won't take more than a few years to find out.


Two new wonderful recipes have been added to What's for Dinner at Your House?: Simple Chicken Tajine (Morocco) and Beef and Barley Vegetable Soup. Check them out.

Thank you, Guy T. ($30), for your exceedingly generous contribution to this site. I am greatly honored by your on-going support and readership.