Why Are We So Unhealthy? Our System Makes Us Sick & Keeps Us Sick

The full consequences of the food/illness/healthcare system take decades to manifest.

That America is in the throes of a systemic health crisis can no longer be denied. According to the U.S. Department of Health And Human Services, more than two-thirds (68.8 percent) of adults are overweight or obese.  (Overweight is typically defined as a body-mass index (BMI) of 25 or higher. A BMI of 24.9 is not exactly featherweight; I would have to add 30 pounds to reach a BMI of 24.9. )

The health risks of being overweight or obese include:

Since the early 1960s, the prevalence of obesity among adults more than doubled, increasing from 13.4 to 35.7 percent in U.S. adults age 20 and older.  (Source)

The Journal of the American Medical Association (JAMA) reported in 2015 that roughly half of all adult Americans are diabetic or prediabetic (also called metabolic syndrome).

If we add up everyone in America who is either suffering from or at risk of lifestyle-related diseases such as heart disease, diabetes and lifestyle-related types of cancer, it’s clear this is an unprecedented national health crisis that has no easy or cheap medical fix.

Why have we become so unhealthy? The answers come thick and fast: we are more sedentary as most work is now white-collar; the foods low-income people can afford are unhealthy; children now spend time playing digital games rather than playing outside; serving sizes of sodas and other high-calorie/low nutrition beverages have ballooned; people buy more convenience and fast foods and prepare fewer meals at home, and so on.

Two things are clear: there is no one solution to the epidemic of lifestyle-related diseases. Limiting sodas in schools and demanding better labeling of food are examples of reforms that are well-intended, but have so far had little effect on the expanding waistlines of Americans or their ill-health.

The second is expressed by the Chinese proverb: “Diseases enter through the mouth,” i.e. disease is a result of what we eat and drink. Since what we eat has an enormous impact on our health, if we want to tackle our health crisis in a manner that get results, we must start with what we eat and how our food is grown, processed and prepared.

Once we start examining our diet, we have to examine where our food comes from, how it is grown/raised and how it is processed for consumers.

A second Chinese proverb explains why we must start with diet: “When you’re thirsty, it’s too late to dig a well.”  If we want to avoid lifestyle illnesses, we must start pursuing a new way of growing and preparing food now, not after we’re already ill.

To understand why this is so, we must start with the fact that we live in a highly centralized government/private-sector system that limits our choices to maximize the profits of corporate cartels: Big Agriculture, Big Oil/Ag Chemicals, Big GMO seeds (Monsanto et al.), Big Processed Foods, Big Supermarkets, Big Fast Food, Big Healthcare (what I have called sickcare for many years, because profits flow not from keeping us healthy via prevention but from keeping us alive when we’re suffering from chronic lifestyle illnesses) and last but not least Big Pharma, which is happy to provide medications that costs tens of thousands of dollars per patient per year to address the symptoms of lifestyle diseases rather than the causes, which trace back to what we eat and how we live. 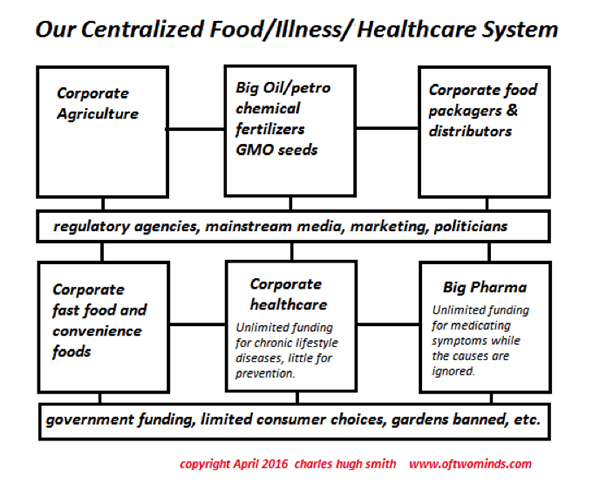 Once you hear an alternative account of how we could be raising food and delivering it to consumers to prepare at home, you grasp the sickening stranglehold Corporate America and government agencies have on our food, diet and the resulting epidemic of ill-health.

I was fortunate to attend a permaculture conference, 'Better Soil, Better Food...A Better World' at Tara Firma Farms in Petaluma, California this past weekend that Adam Taggart (co-founder of Peak Prosperity) was responsible for producing. Joel Salatin (author of nine books, including Everything I Want To Do Is Illegal: War Stories from the Local Food Front and head farmer at Polyface Farms, Virginia), Paul Kaiser (Singing Frogs Farm, Sonoma, California), Toby Hemenway (author of Gaia's Garden: A Guide to Home-Scale Permaculture, 2nd Edition), and Robb Wolf (author of The Paleo Solution: The Original Human Diet) were on hand to explain the connections between the way our food is grown, processed and distributed and our ill-health.

Though these connections are common sense—we all know about garbage in, garbage out—the linkage between our extractive, monoculture agriculture and all the other subsystems of food and health remains opaque to most Americans.

Centralized Systems Are Hijacked By Those Who Profit Most From Them

Though it is poorly understood by conventional economists and political scientists, centralization makes it inevitable that the interests that benefit most from centralization (corporations) will serve their self-interests by gaining control of centralized power via lobbying and political contributions.

Once entrenched interests have purchased influence over politicians and regulatory agencies, they use the power of centralized government to limit competition by erecting regulatory barriers.  The regulatory system is soon approving whatever reaps the most profit for the big corporations and restricting alternatives to corporate products.

Before centralized federal and state government agencies and big corporations became dominant, decentralized family-owned farms and grocery stores were the norm. Anyone seeking to control the entire sector faced an essentially impossible task.

Now, a handful of corporations control key sectors of the food/healthcare complex: seeds, chemical fertilizers, processing of food into consumer products, distribution to consumers via grocery chains and the fast-food industry, and the healthcare/pharmaceutical sectors.

This concentration of power over our food and health is presented as the lowest-cost and most efficient system possible: concentrated ownership and control, we’re told, enables vast economies of scale that lower the cost to consumers. While this might be true of grains, it is not true of healthcare.  And since food and health are causally connected, we have to consider the total system costs: not just the cost at the grocery store or fast-food outlet, but the eventual costs of low-quality food and an unhealthy diet.

Once we consider total system costs, we have to include healthcare: the American healthcare system is the most expensive per capita on the planet, over-delivering costly (and often questionable or needless) tests, procedures and medications, and under-delivering affordable preventative care and well-being.

While it’s impossible to break out the eventual system costs of poor diet, the preponderance of lifestyle-related diseases that end up being treated suggest the percentage of healthcare related to diet and lifestyle (fitness, sufficient sleep, etc.) is substantial: 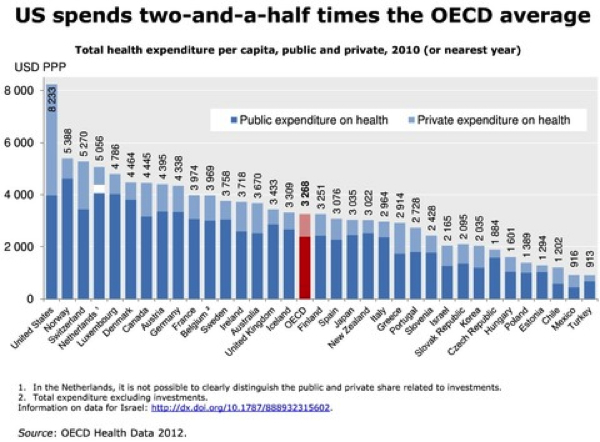 Though the mainstream media paints skyrocketing healthcare costs as the result of costly new technologies and drugs, the unspoken reality is that higher costs also reflect cartels being able to raise prices without fear of competition and the declining health of Americans. 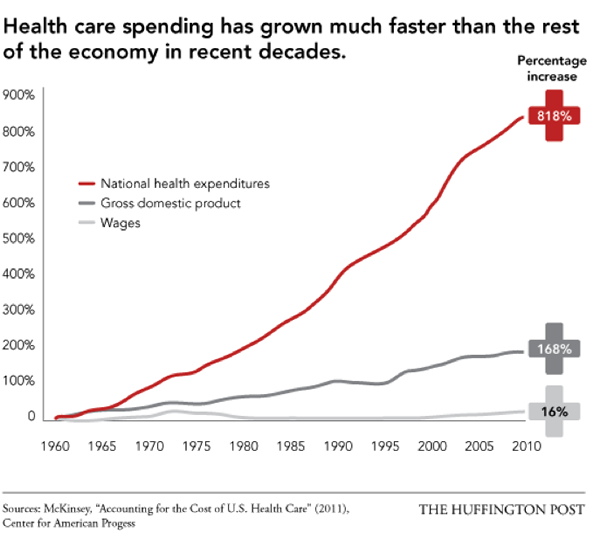 The food/illness/healthcare system is not a conspiracy; it is a self-organizing system driven by the goal of maximizing profit and eliminating competition. The two are related, of course; the most effective way to maintain high prices and reap big profits is to eliminate competitors and consumer choice.

Big Pharma doesn’t ask the fast-food cartel to make its food unhealthy so its customers will need pricey medications to control the resulting lifestyle illnesses down the road; the fast-food cartel chooses the lowest-priced (and thus lowest quality) ingredients and processes to maximize its own profits.

The full consequences of the food/illness/healthcare system take decades to manifest. Humans respond to price (buy what’s cheapest) and what triggers the reward centers of the brain (consume sugar, fat, salt).  It’s remarkably easy to exploit these short-term factors to sell unhealthy food and meals whose lifetime costs are still years or decades in the future.

The same can be said of our extractive system of monoculture agriculture.   Though touted as the most efficient system for growing food in the world, monoculture depends heavily on cheap fuel, cheap chemical fertilizers and pesticides/herbicides, cheap transportation and ignoring the eventual cost of losses in soil and soil quality.

I’ll share one small example that illustrates the hidden costs of our corporate-dominated system.

Last summer we drove to a Central Valley (Calif.) farm county for the annual county fair, a staple of rural life we enjoy.  To reach the town, we took a two-lane county lane. On a sharp curve in the road, hundreds of ripe tomatoes lay on the pavement and shoulder. It didn’t take much to see what had happened; as heavily loaded harvest trucks made the turn, tomatoes had spilled onto the roadway.

We stopped and picked up some of the fallen tomatoes. They were red Roma tomatoes, and they were still firm, undamaged by the impact of cascading ten feet from the trucks.  The fields nearby were already plowed under, bare dirt as far as the eye could see. 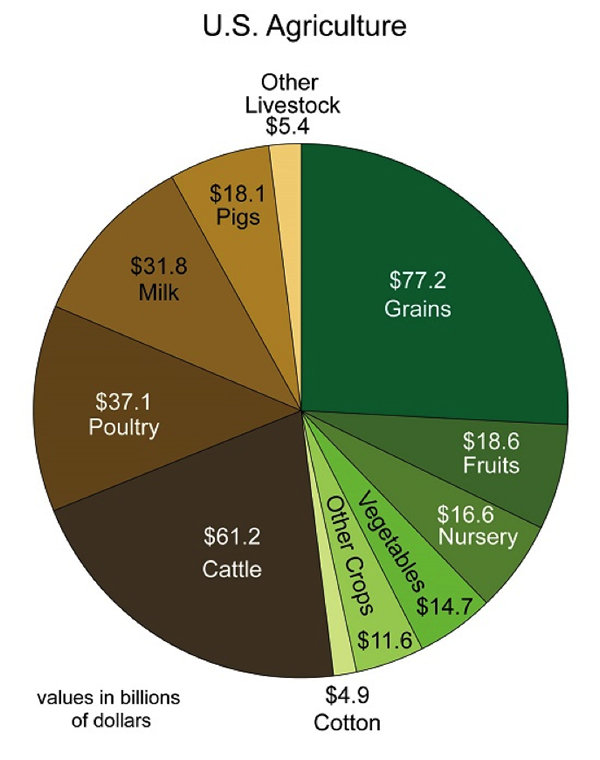 Though the naked eye could not possibly discern the consequences of this monoculture mode of growing tomatoes, studies have found that each acre of tilled bare soil loses tons of topsoil to erosion of wind and rain every year.

As for the nutritional content of the tomatoes: as an experiment, we took some of the fallen tomatoes home to see if they ever ripened enough to become soft. They never did; they remained hard and tasteless, even in a bowl of fruit that naturally emitted ripening ethylene.

These indestructible tasteless tomatoes were undoubtedly bred to become tomato sauce in some distant processing plant, bound for wholesalers and retailers who end up taking most of the consumers’ dollar: 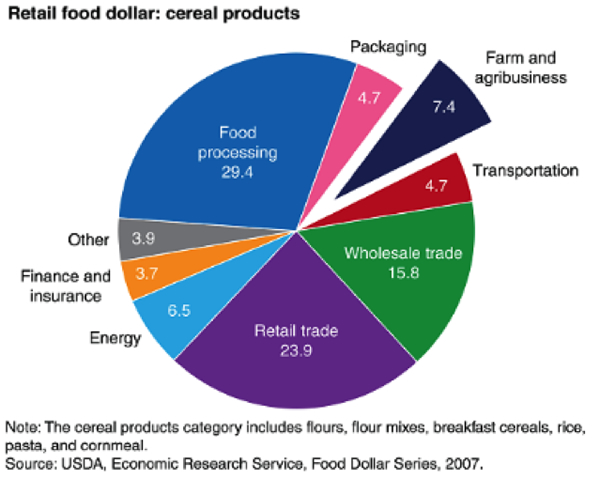 It Doesn’t Have To Be This Way

It doesn’t have to be this way. Regenerative agricultural practices actually build soils rather than strip-mining them. Consumer-supported agriculture (CSA) cuts out the corporate middlemen and delivers high-quality food directly to consumers.

If we consider that Americans throw away 40% of all food they purchase, it’s not hard to see another option: waste nothing and spend the savings on higher quality food.

High-quality vegetables can be grown in cities, lowering cost and raising access (see: A guerilla gardener in South Central L.A.)

My time this past weekend with Joel Salatin, Toby Hemenway and the folks from Singing Frogs Farm was filled with compelling yet practical steps each of us can and should take in our lives to take more control over our health -- in ways that are easy, enjoyable and result in big improvements to our quality of life

In Part 2: Take Control: If You Don't, Who Will? I share the most important of these takeaways and detail ways to opt out of our matrix of ill health and extractive systems. There's a lot of room for optimism here to make great improvements in our lives with steps that feel life-enhancing rather than sacrifices. The real question is not Why did we let the system get this bad?, it's rather Why shouldn't we start embracing these very accessible solutions immediately?

This essay was first published on peakprosperity.com, where I have been a contributing writer for five years.