There are limits on what the Fed can do when this bubble bursts, as it inevitably will, as surely as night follows day.

Given that both The Economist and The Wall Street Journal have covered the impossibility of pension funds achieving their expected returns, this reality cannot be a surprise to anyone in a leadership role.

Many unhappy returns: Pension funds and endowments are too optimistic

Public Pension Funds Roll Back Return Targets: Few managers count on returns of 8%-plus a year anymore; governments scramble to make up funding 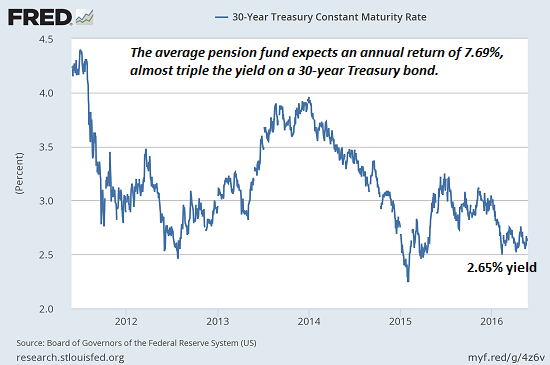 Here's problem #1 in a nutshell: the average public pension fund still expects to earn an average annual return of 7.69%, year after year, decade after decade.

This is roughly triple the nominal (not adjusted for inflation) yield on a 30-year Treasury bond (about 2.65%). The only way any fund manager can earn 7.7% or more in a low-yield environment is to make extremely high risk bets that consistently pay off.

This is like playing one hand after another in a casino and never losing. Sorry, but high risk gambling doesn't work that way: the higher the risk, the bigger the gains; but equally important, the bigger the losses when the hot hand turns cold.

Here's problem #2 in a nutshell: in the good old days before the economy (and pension funds) became dependent on debt-fueled asset bubbles for their survival, pension fund managers expected an average annual return of 3.8%--less than half the current expected returns.

In the good old days, the needed returns could be generated by investing in safe income-producing assets--high-quality corporate bonds, Treasury bonds, etc. The risk of losing any of the fund's capital was extremely low.

Now that the expected returns have more than doubled while the yield on safe investments has plummeted, fund managers must take risks (i.e. chase yield) that can easily wipe out major chunks of the fund's capital if the bubble du jour bursts.

Here's problem #3 in a nutshell: everyone who rode the great bubble of 1994 - 2000 (including pension funds) soon reckoned 10%+ annual returns on equities was The New Normal, so expecting 7.5% - 8% annual returns seemed downright prudent.

When that bubble burst, decimating everyone still holding equities, the Federal Reserve promptly inflated two new bubbles: one in stocks and another in housing. Once again, everyone who rode these two bubbles up (including pension funds) minted hefty profits year after year.

This seemed to confirm that The New Normal included the occasional spot of bother (a.k.a. a severe market crash), but the Federal Reserve would quickly ride to the rescue and inflate a new bubble.

When the dual bubbles of stocks and housing both burst in 2008, once again the Fed rushed to inflate another set of bubbles, this time in stocks, bonds and rental housing. Lowering interest rates could no longer generate a new bubble. This time around, the Fed had to lower interest rates to zero indefinitely, and embark on the most massive monetary stimulus in history--quantitative easing (QE) 1, 2 and 3--to inflate a third bubble in stocks.

This unprecedented expansion of free money for financiers and dropping interest rates to zero generated a bubble in bonds and an echo-bubble in real estate--specifically, commercial real estate and rental housing.

These three bubbles once again generated handsome yields for pension funds. Once again fund managers' faith in the Federal Reserve maintaining a New Normal of occasional crashes quickly followed by even bigger bubbles was rewarded.

But the game is changing beneath the surface of Fed omnipotence. The returns on zero interest rates (or even negative rates) have diminished to zero, and the Fed's vaunted monetary stimulus programs have been recognized as enriching the rich at the expense of everyone else.

Even with the unprecedented tailwinds of one massive bubble after another, pension funds are in trouble. The high-risk returns of Fed-induced bubbles followed by the inevitable crashes cannot replace the safe, high yields of the pre-bubble-dependent economy.

If funds are in trouble with stocks in a new unprecedented bubble high, how will they do when stocks fall back to Earth, as they inevitably do in boom-bust cycles? 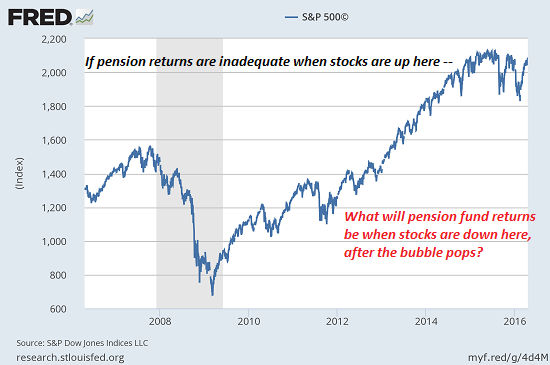 The usual justification for nose-bleed valuations is sky-high corporate profits. But profits have rolled over, and irreversible headwinds are increasing: a stronger U.S. dollar, an aging populace desperate to save more for retirement, an entire generation burdened with student debt and often-worthless college diplomas, a global economy on the brink of recession, diminishing returns on firing workers, diminishing returns on financialization legerdemain, etc. 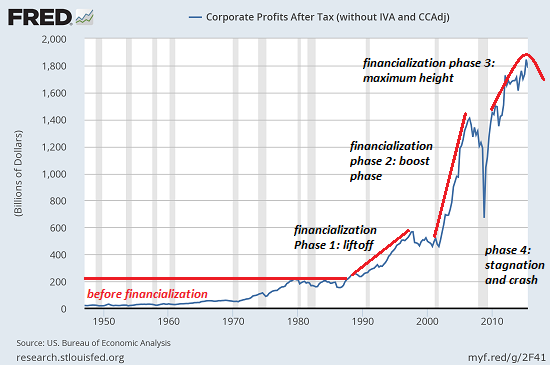 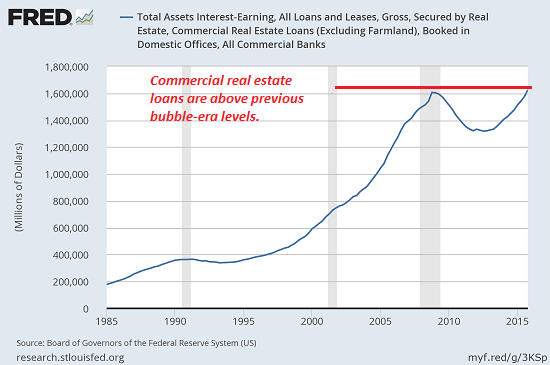 This seems to prove that no bubble bursts for long with the Federal Reserve at the helm, but there are limits on what the Fed can do when this bubble bursts, as it inevitably will, as surely as night follows day.

The Fed can't lower interest rates below zero without signaling that the economy is well and truly broken, and it can't force people who are wary of debt to borrow more, even if it effectively pays borrowers to take on more debt.

All the Fed can do is extend new debt to unqualified borrowers who will default at the first sneeze. This will trigger the collapse of whatever new credit-fueled bubble the Fed might generate.

The political winds are also changing. The public's passive acceptance of central banks' let's make the rich richer and everyone else poorer policies may be ending, and demands to put the heads of central bankers on spikes in the town square (figuratively speaking) may increase exponentially.

It's looking increasingly likely that third time's the charm: this set of bubbles is the last one central banks can blow. And when markets free-fall and don't reflate into new bubbles, pension funds will expire, as they were fated to do the day central banks chose zero interest rates forever as their cure for a broken economic model.