That few believe Mr. Market can possibly stumble only increases the odds of a stumble.

You know how to get into crash positions, correct? Here's your guide: 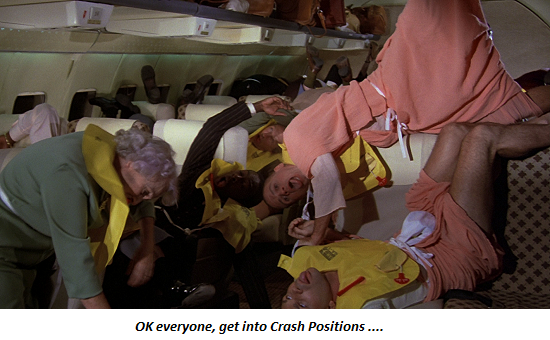 Very few punters expect a real downturn here in stocks. The reasons for confidence are many: the Fed has our back, buy the dip has worked great and will continue to work great, the Fed won't raise rates until December (if ever), the Powers That Be will keep the market aloft lest a plunging market upset the election of the status quo candidate, and so on.

This confidence that the market will be on cruise control into the November post-election rally is the ideal set-up for a crash to SPX 1,850. While we can argue technicals all day, the fact is gaps get filled, usually sooner rather than later. There are two big open gaps in the S&P 500 around 2.040 and 1,860 that have been begging to get filled for months.

The question arises: after months of going unfilled, why not fill them now with a pleasantly unexpected little October crash? Technically, there are a couple of features that suggest the market would really, really like to plummet, if only the Plunge Protection Team would stand aside for a few days.

First, there are the open gaps that ache to be filled.

Then there's the peculiar Zombie Market of July and August, when volatility vanished and trading ranges fell as close to zero as is possible. A sign of strength? Hardly.

Third, the SPX has struggled mightily to claw its way above the 50-day moving average, and has failed to surmount this important technical target despite a month of effort. That suggests Mr. Market is feeling the pull of gravity, and the slightest stumble will cause Mr. Market to careen over the cliff.

The cliff and the gaps both beckon. That few believe Mr. Market can possibly stumble only increases the odds of a stumble. Hubris eventually has consequences.