We will soon wish we were allowed an honest business cycle recession once the current overcapacity implodes the global economy.

We all know the quality of many globally sourced products has nosedived in the past few years. I addressed this in Inflation Hidden in Plain Sight (August 2, 2016): not only is inflation (i.e. getting less quantity for your money compared to a few years ago) visible in shrinking packages, it's present but largely invisible in declining quality.

When products fail in a matter of months, we're definitely getting less for our money, as what we're buying is a product cycle, not just the product itself. We buy a product expecting it to last a certain number of years, and when it fails in a matter of weeks or months, this failure amounts to theft and/or fraud.

When a costly repair is required in a relatively new product, we're getting less for our money, and when the repair itself fails (often as a result of a sub-$10 or even sub-$1 part), we end up paying twice for the inferior product.

Nearly free money was intended to bring demand forward as a means of boosting a stagnant global economy. But there are unintended consequences of this policy: nearly free money doesn't just distort demand--it also distorts supply.

Nearly free money (what I call free money for for financiers encourages the expansion of production: since a corporation can borrow capital for next to nothing, why not expand production to grab more market share? Once market share expands, profits will follow.

Now that everyone boosted production, the world is awash in overcapacity. The capacity is in place to produce quantities of autos, widgets, phones, etc. far in excess of demand.

But when demand is stagnant or supply far exceeds demand, pricing power vanishes: any attempt to raise prices causes retailers and consumers to flee to other suppliers.

In an economy of overcapacity, the only way to maintain profit margins is to lower production costs (including labor) or cut corners: lower quantity and quality, or cheat the labor force or customer (or both) in on way or another. 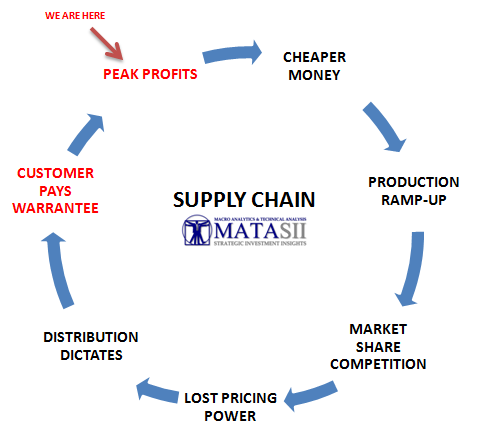 Production costs have already been cut to the bone. Profit margins have been razor thin in China for years, leading to widespread factory closings that left the workers unpaid. (There's one way to maintain profit margins: don't pay your employees.)

There is no way left to cut costs except to cut corners: in effect, defraud the customers with deceptively reduced quantity and quality, and/or defraud the end-producer by shipping pirated defective parts.

The Dangerous Game Behind Fake Ball Bearings (and a lot of other parts, too)

This culture of do whatever it takes to maintain profits and maximize private gain by any means available is a core reason why Why Our Status Quo Has Failed and Is Beyond Reform. What the pirated ball bearings and the opening-fake-accounts scandal at Wells Fargo prove is that when otherwise honest employees are presented with impossible demands, they are effectively forced to lie, cheat and steal from somebody: either the customer or the end-producer.

The only other ways to maintain profit margins are:

1. Consolidate the industry into a monopoly or cartel that fixes prices (for example, the pharmaceutical industry, where a $60 Epi-Pen can be repriced to $600)

This is madness, and the only solution is mass closure/bankruptcy of excess capacity. But this would mean lay-offs of employees and debt that must be written off as a loss, and central bankers have shown they will not tolerate a business-cycle recession.

Since central bankers have banned an honest business cycle recession, the only possible alternative is a culture of pirated shoddy parts, lies, deception, fraud, cheating, declining quality and a supply chain that is collapsing along with quality and profits. We will soon wish we were allowed an honest business cycle recession once the current overcapacity implodes the global economy.