Higher education is a self-serving cartel that is failing students, the economy and the nation. 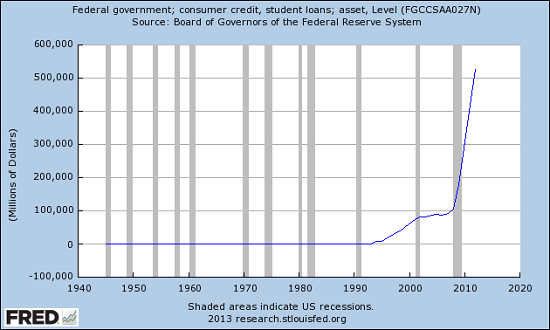 But unaffordability is only one reason why the present system of higher education is unsustainable.

Due to their size and structure, large systems such as national defense, healthcare and education limit the impact of individual initiative. This has several consequences. One is that individuals feel powerless to change the system and so they relinquish responsibility for changing it. As Voltaire observed, No snowflake in an avalanche ever feels responsible. A second consequence is psychological. Even if the system is visibly flawed or failing, insiders feel obligated to defend the system and their role in it, for two compelling reasons: self-preservation and the psychological need to believe in the value of ones place in the institution.

Lets start with what is self-evident about the basic structure of higher education:

1. As my colleague Mark G. described in Higher Education Cartel, Meet Creative Destruction, higher education is a legacy system based on the scarcity of recorded knowledge (printed and other media) and informed lectures. Both recorded knowledge and informed lectures are now essentially free and readily available. This is the material basis of the alternative system outlined in this book, the Nearly Free University (NFU), whose core is an open-enrollment, universally accessible, individually accredited curriculum designed for the emerging economy and the individual student.

2. The current higher education model is a factory composed of broadcast lectures and mass-distributed reading/coursework/tests. The student moves down the assembly line, attending the same lectures as other students, reading the same materials and taking the same tests. When the student receives a passing grade in a quasi-arbitrary number of courses, he or she is issued a diploma.

This factory model of education is fundamentally unchanged from the era of World War II, when the government expanded higher education from its traditional elitist function to serve the nations war production. While factories churned out war materiel with low-skill labor, behind the scenes the war effort demanded a vast increase in engineering and scientific skills. This began the transformation into a knowledge-based economy. The difference between an industrial economy that requires massive numbers of low-skill factory workers and a knowledge-based (often referred to a post-industrial) economy is the knowledge of its workers.

The factory model is obsolete in an era where a variety of nearly-free instructional materials and methodologies enable the student to select the most appropriate approach for his aptitudes and needs.

3. In terms of its financial structure, higher education is a cartel-like system that limits its product (accredited instruction) and restricts its output (credentials, diplomas). (A cartel is an organization of nominally competing enterprises that fixes prices and production to benefit its members. Cartels may be formal, such as the Organization of Oil Exporting Nations (OPEC) or informal like the higher education cartel. Informal cartels often rely on government regulations to restrict competitors entry into their market and on government spending or loans to fund their operations. To mask the uncompetitive nature of their cartel, they devote enormous resources to public relations.)

The cartels basic mechanism of maintaining non-competitive pricing is to enforce an artificial scarcity of credentials. The cartels control of a product that is in high demand (college diploma) frees it from outside competition and free-market price discovery, enabling it to charge customers (students) an extraordinary premium for a product whose value is entirely scarcity-based.

This is the very definition of a rent-seeking cartel, a cartel that extracts premiums solely on the basis of an artificial scarcity. By their very nature, rent-seeking cartels are exploitive and parasitic, drawing resources from those who can least afford to pay high premiums and misallocating capital that could have been invested in productive social investments. The term rents in this context means that the cartel collects a premium without providing any corresponding additional value. The rentier class includes landed aristocracy, who collect rents while adding no value to the production of their tenant farmers.

4. Since the higher education cartel is the sole provider of accreditation (college diplomas), it is unaccountable for its failure to prepare its customers (students) for productive employment in the emerging economy. If a diploma is portrayed as essential, students must pay the cartel even if the cartels product (education) is ineffective and obsolete.

5. The four-year college system is profoundly disconnected from the economy. That the cartels product has little practical application is not considered a factor in the value of the product (diploma), whose primary purpose is to act as a higher education passport that enables passage to a more expansive territory of employment.

6. The present system of higher education is unaffordable for all but the wealthy. The cartels solution to its high prices, $1 trillion in student loan debt (exceeding both credit card debt and vehicle loans), is a crushing burden on both individuals and society at large.

8. The only way the Higher Education cartel can continue to charge a premium for nearly-free products is to actively mystify its product (by attributing secular sanctity and civic value to its diplomas) and promote an artificial value for this product using public relations and political lobbying. In other words, the higher education cartel operates on the same principles as other informal cartels: it depends on the state to fund its operations, and it uses public relations to mask its cartel structure and systemic failure to fulfill its original purpose.

The higher education cartels dependence on federal funding and enforcement of student loans is readily visible in the Federal Reserves Flow of Funds report, Table L.105, which shows the Federal Government's assets and liabilities. Direct Federal loans to students have exploded higher, from $93 billion in 2007 to $560 billion in early 2013. This gargantuan sum exceeds the gross domestic product (GDP) of entire nationsfor example, Sweden ($538 billion) and Iran ($521 billion). Non-Federal student loans total another $500 billion, bringing the total to $1 trillion.

A variety of cultural traditions have effectively obscured these self-evident truths, even as the systems diminishing returns and rising costs have rendered it unsustainable.

The alternative is equally self-evident: knowledge and instruction should be nearly free, and students should be accredited directly, dissolving the monopoly on accreditation that gives higher education its cartel-like power to extract artificial premiums.

This is the key question: does the current higher education system exist to serve students, or does it exist to serve those employed by the system? Those with vested interests in the system will naturally answer both, but to answer this question fairly, we must ask if an alternative system that accredits each student could serve students more effectively than the current system of accrediting schools.

Lets imagine another system, one in which the Nearly Free University and the existing higher education cartel compete to prepare students for individual third-party accreditation of the critical skills and knowledge base needed to establish and maintain a livelihood in the emerging economy.

If the Nearly Free University costs $4,000 for a four-year program (not including room and board) and the higher education cartel charges between ten and 25 times more for the same number of courses, then the higher education cartel had better be 25 times better at preparing students to establish and maintain a livelihood in the emerging economy, or it will lose its customers.

Limiting access to accreditation to skim enormous premiums based on scarcity is not just unethical; it is intellectually dishonest. Cartels are intrinsically extractive, exploitive and parasitic, and no amount of vested-interest justification changes this reality. Creating an artificial scarcity is financial manipulation, and all financial manipulation is ultimately a form of theft.

Progressives, by the very definition of their creed, must support the dissolution of all cartels. Those within the higher education system must choose between financial allegiance to their cartel or refusal to support cartels.

This essay was drawn from my new book The Nearly Free University and The Emerging Economy (Kindle eBook) which is available at a 20% discount ($7.95, list $9.95) this week.


Things are falling apart--that is obvious. But why are they falling apart? The reasons are complex and global. Our economy and society have structural problems that cannot be solved by adding debt to debt. We are becoming poorer, not just from financial over-reach, but from fundamental forces that are not easy to identify. We will cover the five core reasons why things are falling apart: