The best way to restart investment (and thus employment opportunities) is to make the U.S. a magnet for productive capital rather than a graveyard of tax-avoidance strategies.

Donald Trump has made trade agreements a central issue in this presidential election, declaring trade treaties such as the North American Free Trade Agreement (NAFTA) as unfair and subject to cancellation or renegotiation.

Setting aside the issue of whether presidents can cancel trade treaties via executive orders, let's look at the underlying issue: the erosion of manufacturing and entry-level job opportunities that lead to middle-class security and pay.

The question then becomes: what are the causes of this erosion of manufacturing and the middle class? Trade is relatively easy to finger because the flood of cheap goods into the U.S. coincided with the wholesale offshoring of manufacturing capacity.

There are many other issues in play, including:

2. Technology, as automation reduces the inputs of human labor per output even in nations with few trade treaties.

5. Trade is grossly miscalculated by current metrics; if we calculate the value that actually flows to each nation that makes parts and software for the iPhone, we find that "Analysts estimate that as little as $10 of the value of every iPhone or iPad actually ends up in the Chinese economy, in the form of income paid directly to Foxconn or other contractors." Meanwhile, twenty times that sum flows directly to Apple HQ in Cupertino, California for software and profit.

6. Triffin's paradox demands that any nation issuing the global reserve currency must run a trade deficit as a means of exporting the reserve currency into the global economy. I know this is counter-intuitive, but I've explained it many times over the years: 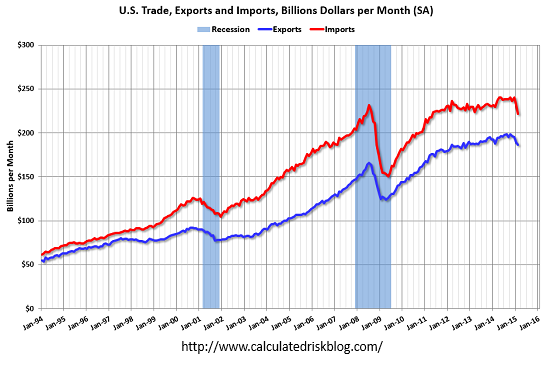 In other words, if you want the Exorbitant Privilege of issuing the global reserve currency, you have to run a permanent trade deficit.

Let's look at what any president can influence/control and what is beyond their reach. Presidents can complain about currency manipulation and even threaten reprisals, but currency manipulation is not only a trade issue; it overlaps with diplomatic issues that extend far beyond trade. For example, the U.S. might tolerate some currency pegs to support key allies.

Any president's ability to limit automation, technology and "software eating the world" is essentially zero. Nations that attempt to limit or stifle technological advances end up stifling productivity and innovation, and as a result they are doomed to stagnation.

The same can be said of global wage arbitrage. There is very little any president can do to stop companies from taking advantage of the divergence of wages between states, nations and regions.

As for destroying the reserve currency (the U.S. dollar) in a quixotic quest for trade surpluses: look at Japan, which has consistently run trade surpluses while wallowing in decades of social and economic stagnation. 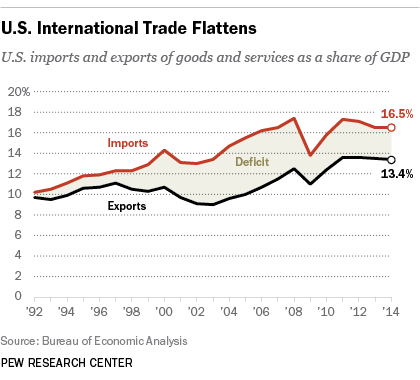 That said, there is one issue the president can influence: the tax rates on domestic corporations. Many nations use tax credits and the like to encourage manufacturers to maintain domestic production, but America's 35% corporate tax rate is an absolute job killer.

This high tax rate forces corporations to game the global tax system for zero benefit to the U.S. or its work force.

Trump would serve the nation and its work force best by lowering the corporate tax rate to a flat 5% for companies that maintained substantial facilities and work forces in the U.S. I submit that a flat 5% rate would actually collect more tax revenues than the 35% rate that pushes employers and employees overseas.

The corporate tax rate of 35% has perversely incentivized moving production and employees overseas. I have yet to meet anyone defending the sky-high nominal tax rates who actually employs people and pays the 35% corporate rate or operates a global corporation.

As an abstraction, the 35% rate appeals to "progressives" intent on punishing Corporate America for its many sins. But the reality is the "progressives" aiming at "evil corporations" have shot American workers in the chest.

The best way to restart investment (and thus employment opportunities) is to make the U.S. a magnet for productive capital rather than a graveyard of tax-avoidance strategies. The problem isn't trade per se; it's a perverse tax system that drives domestic employers overseas.

The Truth About Trade: What Critics Get Wrong About the Global Economy

"The truth is more complicated. Although imports have put some people out of work, trade is far from the most important factor behind the loss of manufacturing jobs. The main culprit is technology. Auto­mation and other technologies have enabled vast productivity and efficiency improvements, but they have also made many blue-collar jobs obsolete. One representative study, by the Center for Business and Economic Research at Ball State University, found that pro­ductivity growth accounted for more than 85 percent of the job loss in manufacturing between 2000 and 2010, a period when employment in that sector fell by 5.6 million. Just 13 percent of the overall job loss resulted from trade."