How About Presenting the Facts and Letting Voters Decide Who's "Fit to Serve"?

This simple two-step process would greatly diminish the Ministry of Propaganda's influence.

1. Americans' Trust in Mass Media Sinks to New Low (Gallup)
"Americans' trust and confidence in the mass media 'to report the news fully, accurately and fairly' has dropped to its lowest level in Gallup polling history."

2. Both the Republican and Democratic candidates have highly unfavorable ratings; they may well be the most disliked nominees in American history.

3. The status quo in which voters are supposed to rubber-stamp the decisions made at the top of the wealth/power pyramid is falling out of favor.

4. Personal physicians are not disinterested parties; they serve the candidate, not the voting public. Their public claims of "fit to serve" suffer from irreconcilable conflicts of interest.

To best serve the interests of the nation and the voters, I propose that all candidates for the presidency submit to a thorough medical exam at an Army or Navy hospital that immediately releases the full results to the public. The attending physicians' names will be drawn from a pool of qualified staff at the start of the exam, making it impossible for anyone to threaten or buy off the attending physicians prior to the exam.

The exam will include chest x-rays, CT scans, neurological tests and the usual blood work.

The examinations will be overseen by healthcare/medical journalists to insure that the exams adhere to stardard practice and the results are posted immediately without any tampering.

The principles at work here are:

1. The public has a right to know the facts relating to each candidates' health.

2. Each candidate is given the exact same tests and treated exactly the same.

3. The public will decide who is "fit to serve" after reviewing the facts of the matter.

If any candidate prefers to keep the results of the health exam private, they can do so by exiting the race for the presidency.

In addition to the medical exam, each candidate will hold a two-hour press conference every week until election day. Representatives of the entire media, not just the handful of mainstream networks and newspapers, will be invited to attend. To secure the room, the public will not be admitted.

Candidates will be invited to sit in comfortable chairs and answer any and all questions on any subject. They will not be allowed to wear sunglasses or be attended by aides. Since the room will be secured (all media reps will be screened for weapons, all entrances properly sealed, etc.), there is no need for Secret Service personnel to hover over the candidates. 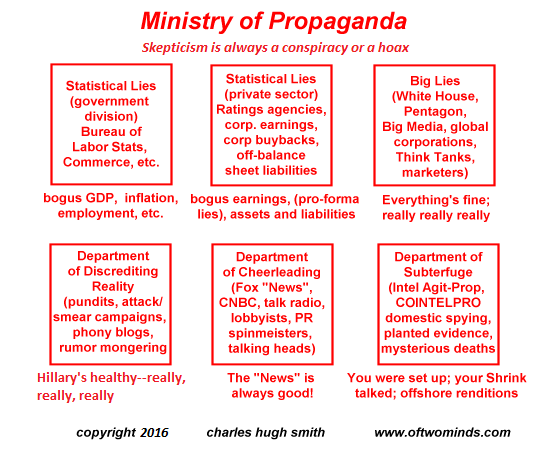 This simple two-step process would greatly diminish the Ministry of Propaganda's influence. It isn't that hard to understand, people: the voters should be able to review the candidates' medical exam results (i.e. the facts of the matter) so they can decide who's "fit to serve" in an informed fashion. Isn't that the core of democracy?


My new book is #6 on Kindle short reads -> politics and social science: Why Our Status Quo Failed and Is Beyond Reform ($3.95 Kindle ebook, $8.95 print edition) For more, please visit the book's website.