The financial MSM and government officials alike are looking for a recovery in the housing market to bubble valuations to "restart the economy." That is not going to happen--not this year, not in five years or even in ten years. Here's why.

The entire world is hoping that housing is about to "recover" and re-ascend its glorious bubble-era heights of valuation. But it's not going to happen.

Why not? For several fundamental reasons:

1. Bubbles do not re-inflate in the asset class which just popped. It is simply a truism that bubbles never reflate, ever. Tulip bulb valuations did not rise to stratospheric heights after the Tulip Craze popped, and the Nasdaq dot-com bubble did not reinflate, either, for the very good reason that bubbles are never based on rational valuations--they are based on the psychological state of mania which cannot be reinstated once lost.

Consider tech stock Cisco Systems (CSCO), a well-managed "real company" which continues to make profits providing real-world goods and services. It currently trades at around $17.50 a share, down from its dot-com bubble valuation of about $81/share.

To "recover" its bubble-era valuation, Cisco would have to rise five-fold. That's not going to happen. Now that the mania has dissipated, Cisco is valued on more rational metrics like earnings, profits, etc.

The speculative mania always moves on to a new asset class. After the dot-com bubble popped, the speculative bubble moved on to housing. Now that the housing bubble has popped, the mania has moved to the bond market. When the bond bubble bursts (it's guaranteed that it will in the next two years, losing 50% or more in the process) then the only asset class which hasn't already been blown into a bubble is precious metals/gold.

In other words: those wishing to catch the next speculative mania should be buying gold and silver, not stocks, housing or bonds.

2. Inflation sets the "recovery" target ever higher. While we are in a deflationary period right now, a serious amount of inflation occurred between Cisco's top in January 2000 and the present. According to the BLS Inflation Calculator, $81 in 2000 is $100 in current dollars.

So Cisco would have to rise not to $81 to match its bubble-era valuation but to $100. The same is true for housing. Consider the possibility many see on the horizon, a period of high inflation caused by the insanely stupendous rise in paper money supply.

I am not predicting such an inflation, just speculating on the effects it would have on bubble-era valuation calculations.

Let's say a house which sold for $100,000 in 1997 was valued at $400,000 at the housing bubble peak in 2006. I fully expect the property to retrace to its pre-bubble valuation, as that is the usual progression of bubbles and their demise.

Now if inflation ramps up and ravages the value of the dollar, the price of a tangible good like a home might well rise more or less along with inflation, as people will be trying to turn their rapidly devaluing dollars into some tangible good as a means of preserving wealth.

For an example of how this works, consider the stock market in the inflationary period of the 1970s:

It is easy to foresee the same thing happening in housing should inflation ignite. Over the next 16 years, the house which sold for $400,000 in 2006 may well rise once again to that nominal price, but the inflation-adjusted value could well be closer to $100,000 when priced in 1997 dollars.

This is why nominal prices in stocks, housing, bonds and gold are essentially meaningless. All assets have to be valued in terms of purchasing power, and as imperfect and flawed as any inflation/deflation gauge might be, it's still a better guide to purchasing power than nominal price.

In deflation, debt grows ever more burdensome as money becomes more valuable and wages and income drop. As a result, assets dependent on debt ( that is, real estate) drop in value. In deflation, real estate become a "capital trap" which loses value as cash gains in value. As incomes plummet, so do rents, i.e. the income stream which real estate earns, further impairing its value.

Deflation often accompanies depression, and nothing is more of a capital trap than an empty house or building earning zero income. Compared to that, cash earning interest looks very attractive. This creates another drag on housing valuations.

So whatever the future holds, deflation or inflation (or periods of one following the other), housing will never return to its bubble-era valuations when measured by purchasing power/adjusted for inflation.

4. The fundamental driver of the housing bubble was once-in-a-lifetime low interest rates and loose/fraudulent lending. 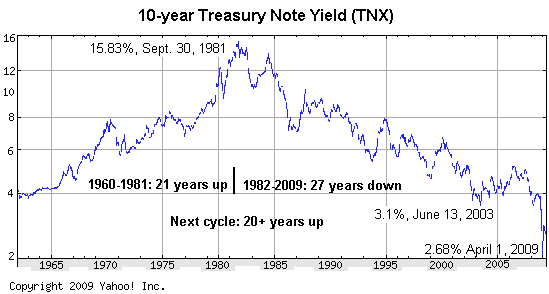 Bond yields (and thus interest rates) tend to move in generational cycles of about 20 years-- occasionally as short as 17 years and as long as 27 years. The current decline in yields has now run 27 years which the historical maximum for such cycles, and thus we can safely predict that yields and interest rates will be rising for the next generation.

Why would interest rates rise? Easy--the U.S. is borrowing trillions of dollars a year and once the rest of the world either runs out of cash or the desire to give us all their surplus capital then interest rates will rocket regardless of what the Fed or U.S. Treasury do. (Recall the analogy of the Financial Royalty standing knee-deep in a rising tide demanding the waters recede. Good luck with that, fellas.)

As for loose/fraudulent lending--you know the story already. It isn't coming back.

So if the fundamental drivers of insanely low interest rates and insanely loose lending are not coming back, then precisely what forces will reinflate the housing bubble? The answer is: none.

Demographics? As noted here many times, housing density (number of people per structure) has been falling for decades. As density rises, all future population growth can be easily accomodated with the existing housing stock.

Speculative mania? That circus came to Housing Town and left, never to return in our lifetimes (if you're three years old you may live to see another housing bubble in your dotage).

Those counting on a reinflation of housing to bubblicious heights to fuel another manic bout of borrow-and-spend will be sorely disappointed. Housing is never coming back if we define "coming back" as a return to bubble-top 2006 valuation as measured in purchasing power.


Thank you to everyone who emailed me recently. My computer time has been very limited due to the intrusions of "real life" and so I remain behind in all digital work. Thank you for your patience and understanding.

Thank you, Dennis G. ($17.76), for your extremely symbolic and most welcome generous contribution to this site. I am greatly honored by your support and readership.