The inevitability of the housing/ leverage/speculation bubble's collapse can be illustrated by the analogy of a steeplechase in which the hurdles are lowered to near-zero: everybody qualifies, everybody wins.

Though there are many causes for the housing bubble's expansion and collapse, let's consider the most basic one: the bar for qualifying for a mortgage was lowered to near-zero. This can be illustrated by a steeplechase analogy in which the long-standing prudently high mortgage qualification hurdle of "20% down, verified income and 35% maximum of income" was replaced by one a mere few inches in height: 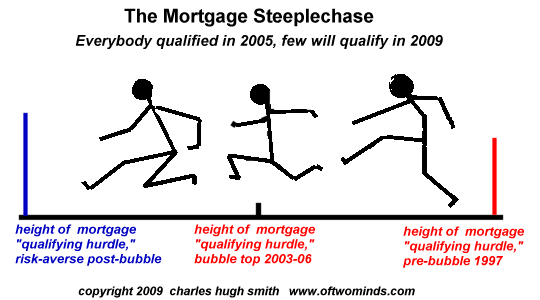 Surprise--everyone with a pulse and the will to lie/stretch the truth not only qualified for the "race," they all crossed the finish line with flying colors. Is there any wonder that millions of marginal buyers leaped into the race, and that their marginality was quickly revealed once they left the track and returned to real life?

And now that the entire charade of passing off these millions of highly risky, doomed-to-default mortgages via securitization to unwary investors has ended, risk avoidance has led not just to a reinstatement of higher qualifying standards but a raising of the bar.

So now in the post-bubble aftermath, the hurdle not only excludes the marginal risky borrowers, but some of those who might have qualified before the bubble mania infected the housing and lending markets.

Way back when the bubble was, well, still bubbling merrily, I offered two analyses of the bubble's impending demise based on various data and this chart from the FDIC:

(And as a lagniappe, here is a more recent appraisal of the same data: Will Delinquencies Trigger a New American Revolution? (April 7, 2008))

What this FDIC charts says is 74% of households were above poverty level at the top and 69% owned houses. The remaining 5% were either too ethical to lie/cheat their way into a huge mortgage or they were among the few remaining prudent citizens.

I'm going to state various data points here; all are sourced in the above articles.

The FDIC estimated 5% of home owners were marginal and would not have cleared the more strigent "hurdles" of the pre-bubble era of relative fiscal sanity. Since there were roughly 75 million homeowners (50+ million mortgages and 25 million homes owned free and clear) that means 3.75 million homeowners could not really afford to own a home. These marginal borrowers are now losing their homes.

Many numbers are being bandied about, such as 2.3 million U.S. properties in foreclosure (default notices, auction sale notices and bank repossessions) in 2008 (RealtyTrac), 2.1 million foreclosures in 2008 and 1.7 million in 2007 (Moody's economy.com). Interestingly, this first wave of foreclosures aligns rather closely with the 3.75 million most marginal owners identified by the FDIC.

But lest we assume "the worst is over" (ah, the rallying cry of the Bulls at every turn, every hour and every minute of every day), let's revisit this oft-reprinted chart of future mortgage resets:

As we can see, the washout of marginal subprime borrowers is receding (the first 4 million foreclosures) but the waves of other mortgages resets is just beginning. We might also note that about 8.3 million borrowers are underwater on their mortgages, owing more than the value of their home, and depending on which projection you trust this number is on the rise to 10 million or is already at 10 million when recent declines in value are considered.

These numbers suggest there are another 4 million homeowners who are at risk of default/ forclosure in the next two years. As for this being "the bottom," let's return to our steeplechase analogy.

If millions of households no longer qualify for a mortgage, then who's going to be buying the 8 million houses which are in default? Yes, speculators are busy snapping up "bargains," but few seem to ask who will be buying from the speculators.

The other enormous difference between the bubble peak and the present is jobs are being lost which may never come back. In Endgame 3: The End of (Paying) Work (January 21, 2009) I came up with a potential decline of 21 million jobs out of the bubble-peak workforce of 137 million, jobs in the FIRE ecoomy, retail and construction which aren't coming back.

Let's say I'm off by a factor of two and "only" 10 million jobs are lost (or fulltime wage-earners are cut to part-time or temp), then how many households will be able to "jump" the qualifying hurdles?

While we're on the steeplechase analogy, let's apply it to the lenders and banks which are supposed to fuel the next housing bubble with limitless mortgages at low rates. As various facts about the stress test have come to light--that it wasn't very stressful, that 7 of the 19 banks failed to clear even this super-low hurdle, etc.--then we have to wonder what the "stress test" of a truthful accounting of bank assets and liabilities might reveal: 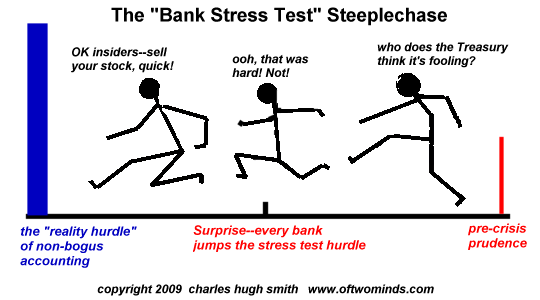 If the Treasury's phony stress test was a 6-inch high hurdle, then reality is a 10-foot high solid concrete barrier. Confidence in the truthfulness of the Treasury's stress test is essentially zero; whata bout all the off-balance sheet "assets"? What are the market values of all the toxic "assets" currently valued on what correspondent Jason calls "Hopium"--the fragile hope that a future re-inflated bubble will lift the value of worthless assets back to their bubble-era glory?

You can lower the bar on borrowers and banks to near-zero to create the illusion of "qualification" or "certification" but reality remains a 10-foot high concrete barrier which the marginalized borrowers and banks have yet to face. With jobs in decline and defaults far from the end-game, clearing a 6-inch high hurdle does not mean the contestants are ready to clamber over the looming 10-foot high barrier just ahead.

Hope is like a drug. It's addictive and makes you feel good but in the end it's bad for you.

As you noted, a big part of this debacle is related to confidence and I've been thinking about what it would take to restore my confidence in the system: (this is a wish list... I'm not delusional in thinking that any of these will occur)

Removal of GS people from all positions of influence and power, as well as anyone remotely connected to Goldman Sachs (GS). For a discussion on the reach of GS see 'Goldman Conspiracy:' RICO? Or Medal of Freedom? and Tremonti and Johnston do Goldman Sachs.

Real/accurate government data in all areas

Each time a member of Congress speaks about legislation or professes to represent the interests of the public at hearings or other events, he/she must simultaneously state any contributions received from businesses potentially affected.

Real reporting by newspapers, i.e. not influenced by politics and advertisers (why pay for a newspaper subscription when all you receive as purported news is extended advertising)

Return of legislation intended to protect the public, such as Glass Steagall

Obviously, there are many more, but this would be a good start.

However, as I stated at the start, I believe there is little hope for reform. Sorry, America, We're Too Corrupt To Fix The Financial System.

Thank you, Jason and Cheryl.

Thank you, Mark L. ($35), for your most generous contribution to this site. I am greatly honored by your support and readership.