Two charts reveal much about the current Wall Street rally in equities.

Frequent contributor Harun I. provided two self-explanatory charts which shed light on the current rallies in the stock market and oil.

The first is a long-term snapshot of the Dow Jones Industrial Average, showing its 11-fold increase from the start of the Great Bull Market in 1982 to the present "nascent recovery." As Harun notes in his comments, credit default swaps have risen 10-fold since the dot-com bubble burst; CDS can be viewed as a rough measure of leverage and risk-gaming. 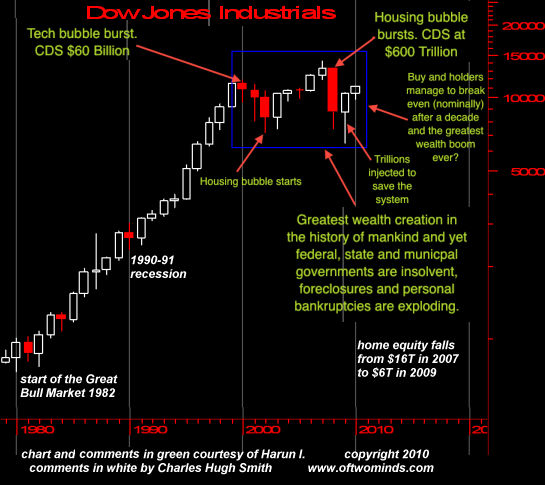 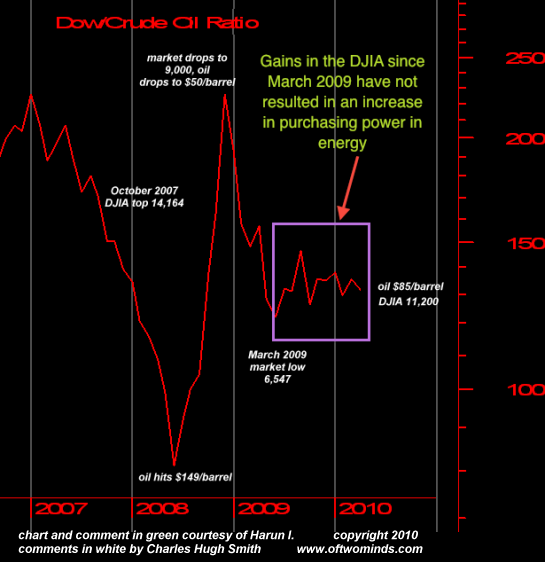 Thank you, Harun, for these enlightening charts which remind us that nominal prices are not the final arbiter of value or purchasing power.

I would like to make an important clarification about my entry yesterday, Debt, Democracy, Autonomy and Revolution: Understanding 2010-2021 (April 29, 2010). By using the word "revolution" I meant a revolution of understanding as noted in this paragraph:

Debt servitude and the fact that they now own virtually nothing will predispose citizens to finally grasp the failure of the Savior State/Plutocracy status quo; that revolution of understanding will lead to an embrace of radical reforms which were hitherto "impossible."

I should have emphasized by radical reform I mean peaceful, legal reform of the kind which has often been advocated in U.S. history: by Progressives in the first decades of the 20th century and by reformers in the post-Watergate era, to name but two examples.

I do not believe in violent revolution as a "solution" any more than I believe that scapegoating other nations or groups solves political/financial problems. We as nation and we as a species are entering dangerous times, and my core spiritual and political views as expressed in this site are grounded on the belief that positive transformation is not only possible but it is the only real solution to our interconnected problems. I believe that political, financial and cultural transformation is a legitimate and realistic alternative to violent chaos or a Police State.

The "Third World" (those parts with functioning government and relatively low levels of inequality) offer numerous examples of how life goes on quite happily if financial assets fall as financial fraud collapses. As I have noted many times here, the vast majority of Americans don't actually own any assets of substance anyway, so the collapse of assets will also mean the disappearance of all debt: credit, debt and assets are connected.

The top 1% will suffer the loss of assets; the bottom 80% will lose their debt-serfdom. It's something to consider: a collapse of the status quo Wall Street Fraud would only be a calamity to the small circle who own 93% of the nation's financial assets. For the rest of us, it means a Debt Jubilee as uncollectible debts are written off en masse.

I see no need for revolution; what is needed is individual responsibility and autonomy, an engaged citizenry, the reduction of concentrations of power and a transformation to a sustainable way of living.

I also want to make it clear that in asking whether the corporate Mainstream Media has an agenda in their largely negative coverage of the Tea Party movement, I am in no way condoning racially offensive depictions of President Obama which appear at various Tea Party demonstrations. I find these inexcusable, and remind readers that President Obama and I are both alumni of the same prep school, Punahou School. While Punahou is a bastion of privilege (Obama's grandmother paid his tuition, while I attended tuition-free because my stepfather was a teacher there), it is a multi-ethnic bastion of privilege.

I would also remind readers (or inform new readers) that I am married to an Asian-American, my stepmother is Hispanic, my niece is African-American and I am Scots-Irish/English and French (Wallace/Robinson, Smith, Mankin and Basset). All the members of my family are native-born Americans. In other words, ours is a typical American family. (In the extended family, there are gay Americans as well.) To show how open-minded we are, my brother married a French citizen (now that's open-minded!)

We are in this together, folks, and as the fraud and debt-based economy crumbles around us, we must be wary of the temptation to scapegoat or demonize various nationalities and groups, both within the U.S. and in the world at large. I remind readers that propaganda works by reinforcing the biases we already have. That goes for all political persuasions.

For myself, I turn to these lines for guidance: He that is without sin among you, let him first cast a stone at her. And again he stooped down, and wrote on the ground. And they which heard it, being convicted by their own conscience, went out one by one, beginning at the eldest, even unto the last: and Jesus was left alone, and the woman standing in the midst. (John 8:7-9)

Though this is from the Bible, undoubtedly every major faith has a similar passage or lesson.