Base money supply of $2 trillion ("printed money") pales in comparison to the $38 trillion in private debt and the $11 trillion lost in the credit/housing bust.

Frequent contributor Harun I. recently made a comment which highlighted the futility of "printing money" to compensate for deleveraging and credit/asset destruction.

Harun referenced this chart from one of Mish's most compelling entries: Bernanke Wants to End Bank Reserve Requirements Completely: Does it Matter? 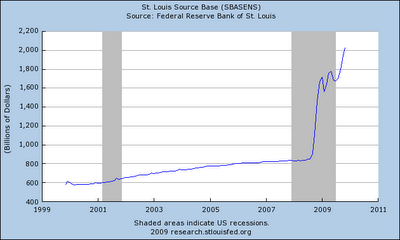 With only 3.8% real money backing all the debt out there ($T in cash and $52T in debt), it would not take much to drain the system of physical money, and then what? To think of this another way, if 3.8% of the debt out there was paid in full and no lending took place, all existing real money would vanish and a whole lot of people would be holding the bag.

This is the dark side of leverage. And, this is why deflation is so feared. And this is why, in a deflation, cash is king (because it becomes scarce). As highly levered as the system is, the Fed could run the presses night and day and not make a dent.

Let's take just the private (non-governmental) debt of $38 trillion. So base money supply is $2 trillion, and the Federal Reserve "printed" another $2 trillion to buy $1.4 trillion U.S. mortgages (since no private investor was insane enough to do so) because otherwise there would be no market for U.S. mortgages. The Fed also pushed a couple hundred billion into goosing the stock markets via "providing liquidity" to "too big to fail" banks. (Private lending remains moribund.)

Now take a look at this chart I prepared from Bureau of Economic Analysis (BEA) data of the 2000-2008 period: the 2000 stock market bust and the housing bubble's inflation and deflation.

There are a number of striking data points revealed here:

2. From 2002 to 2007, household net worth rose by a dizzying $23 trillion. No wonder everyone felt flush; the "wealth effect" from real estate doubling or even tripling was unprecedented, and rising stock and bond markets added a few trillion as well.

3. As households added almost $2 trillion in net liabilities annually in 2005 and 2006, household savings went to near-zero or even negative. This was the result of the bubble-era mantra that "my house is my ATM cash machine, my savings account and my retirement." Indeed, trees can grow to the sky, and then up into the stratosphere....

4. A staggering $11 trillion in household net worth was lost from 2007 to 2008, and as housing has continued to fall, albeit at more modest rates, even as the stock market has "recovered" much of its 2008 losses, we can guesstimate that the losses are roughly unchanged in 2010.

5. As mortgage debt went negative in 2008, the savings rate skyrocketed. Few people seem to ponder the consequences of the U.S. household deleveraging on this scale, or the scale of this wealth destruction. Where U.S. households were borrowing and spending 10-15% of the U.S. GDP every year ($12-$13T GDP, $1.1T to $1.9T in net new liabilities each year), now they are borrowing essentially zero and actually paying down their mortgages (the natural result of making principal payments if one doesn't take on more debt).

To make matters "worse" for a "consumer" economy based on leveraging every last dollar into new debt/credit, households pulled $470 billion out of the leveraging/credit game in 2008 and socked it away as savings. While that's good for banks attempting to recapitalize, it's bad for banks and businesses which depend on households taking that $470 billion and leveraging that into trillions in new debt/spending.

Let's say the Fed "printed" $10 trillion and threw it into the economy. That doesn't quite replace the $11T in wealth which was destroyed in the "global financial crisis"/credit-housing bust of 2008. It is less than half the increase in net worth households experienced from 2002-2007, and it is less than half the expansion of debt in the entire U.S. economy, which doubled from $25T in 2000 to $52T in 2008.

I predict there is another $11 trillion in losses already in the pipeline. Here's a quick rundown of household wealth:

$33T in financial assets, of which $11T is equities (stock market) and the balance in bonds and other liquid business assets

The housing market has another 30% decline baked in as values retrace to pre-bubble levels, so that's another $4-$5 trillion in wealth destruction ahead.

The stock market is at least 30% overvalued as it is "high" on global Central State deficit spending and an illusory "global recovery" created by that State spending, so reckon another $3-$4T in coming losses there.

As interest rates rise then existing long-term bonds will face stupendous losses in their market value, so let's estimate another $4-$5 trillion.

A glut of overcapacity globally will force the liquidation of many business assets which will be rendered effectively worthless (surplus factories, etc.), so let's reckon another $4T in losses in fixed and liquid business assets.

If debt hadn't doubled since 2002, then that slide back down might not be so painful. But all that "free money" was leveraged into more debt.

So even if the Fed "prints" another $2 trillion, or $4 trillion or $6 trillion, that number is overwhelmed by the credit/debt/wealth that is being destroyed by deleveraging.

You want to create inflation? Then print $10 trillion and distribute it to the bottom 90% of U.S. households who collectively own a mere 7% of the nation's financial wealth. That might do it, but I'm not so sure even that would do much.

Households' "belief in the system has faded," to use a Survival+ phrase, meaning their belief in the current "prosperity" based on exponential credit expansion, governance by Financial power Elites partnered with a parasitic Savior State, and the status quo idea that "housing and stock markets are coming back, buy and hold for the long term," etc.

As I have noted before in When Belief in the System Fades, Stock Market Version (March 26, 2010), the American public is staying away from this "global stock market rally" in droves.

U.S. households are staying out of stocks, paying down debt and saving cash. That reflects their actionable belief system. They are rejecting the status quo's desperate pleas to borrow more, spend more and leverage themselves to the hilt once again.

Most pundits seriously underestimate the global overcapacity in manufactured goods. If Americans want another 10 million cars, 10 million sofas, 10 million TVs, or whatever other good you can name, China, the EU, Asia and the U.S. have so much overcapacity that any spurt of demand, no matter how gargantuan, could be met quite easily by production facilities that are already in place and currently idle.

So even if you print $10 trillion and give it away, people will use it to pay down debt and bolster savings; if you doubt this, please re-examine the chart above. Whatever goods they do buy will not rise in price because global overcapacity exceeds any possible spurt in demand.

Lastly, let's ask a question which is rarely ever asked: is buying more surplus consumer crap really the kind of "growth" we want or the kind that is sustainable? The second the consumer item moves off the lot or out of the store it immediately loses much of its value; due to massive overcapacity, "new" will be abundant and cheap until Peak Oil disrupts the entire global trade flow. Mercantilist economies like Japan, China, and Germany (despite lip-service to "domestic demand") are like sharks: they either grow their exports or they die, just as sharks must swim forward or they expire.

But we all know the Fed isn't going to print $10 trillion and give it to U.S. households; it will print trillions and give it away to banks, in a futile attempt to recapitalize insolvent, fraudulent firms which should be forced into bankruptcy. The trillions of "free money" (courtesy of ZIRP, zero interest rate policy) will sit in the banks where it will fund speculations in stocks, bonds, commodities and foreign exchange. A trivial sum will be lent to insolvent consumers with much ballyhoo, and the consequences of deleveraging shoved forward one more election cycle (extend and pretend).