Bubble valuations and Baby Boom demographics both suggest housing prices have a long way to fall.

Combine home prices that are still at bubble heights with the demographics of aging baby Boomers dumping McMansions and you get massively rising supply overwhelming declining demand.

To peek under the hood of the larger trends, I've laid out each buy/sell along with its inflation adjusted value in current dollars. As always, I use the BLS inflation calculator; though it reflects the flaws of the CPI calculation methodology, it is consistent.

These inflation-adjusted "real" numbers are insightfully different from the nominal prices.

To place the 1980 valuations in proper context, we need to recall that the U.S. was suffering from sky-high inflation in the late 70s and extremely high rates of new household formation as the 78 millon Baby Boomers went out and bought houses. Those two factors created a housing boom, both in valuations and homes built.

It took $1.36 in 1980 to buy what $1 had bought a mere three years before in 1977. As people fled the stock market for tangible assets and Boomers started families, real estate soared (as did gold). While I don't have the numbers for that house bought for $96,000 in 1980, anecdotally I can assure you that homes in that price range had sold for $45,000 or less in the early 1970s. Yes, real estate doubled in the high-inflation, Boomer dominated 1970s.

As a result, the $96,000 paid in 1980 was actually very pricey. We can see this in the fact that seven years later, the house had actually declined 17% in inflation-adjusted terms. The 1970s mini-bubble in real estate collapsed in the early 1980s as interest rates shot up to 16% and high mortgage rates raised the costs of borrowing to levels which precluded high sales prices: nobody could afford to pay 1979 prices for houses when mortgage rates were 13% and up.

As the economy grew in the credit and deficit-fueled Great Bull Market of 1982-2007, housing ramped up as interest rates declined for 28 years (with brief counter-trends). As a result, the 1987 valuation of the house almost doubled (in real terms) in 15 years when it was sold in 2002.

The $650,000 purchase price in 2002 also reveals that a significant chunk of the housing bubble appreciation had already occurred (at least in California) as early as 2002.

As this example illustrates, prices has retraced to 2001-2002 levels in California:

What is missing from a comparison of nominal valuations is the inflation-adjusted loss of roughly $150,000 from the 2002 adjusted value of $783,000 to the current post-bubble valuation of $637,000 (assuming they sell the home for the asking price).

While this household will probably reckon that they more or less exited their house with a modest loss, the inflation-adjusted numbers tell a somewhat less benign story. Yes, mortgage interest deductions and a host of other home ownership tax breaks soften this decline in value, but this comparison of "real" numbers suggests that even people who bought early in the decade, at the beginning of the housing bubble, are facing real losses far in excess of what nominal prices reveal.

There are strong headwinds to any future price appreciation in 'real" terms. Most importantly, as this story illustrates, Baby Boomers no longer need giant houses, second homes, investment properties, etc. They are downsizing and selling off surplus real estate to raise cash for retirement and to pay down staggering debt loads.

Meanwhile, the generations behind--Gen X and Y--are smaller in size and not yet the recipients of their parents' wealth--which is increasingly shaky. Put these two demographic trends together and you get rising supply of housing which will swamp any potential future demand.

Here are some other headwinds: prices are still much higher than historic averages, defaults and foreclosures are rising fast, and major mortgage resets (including "interest only" loans which revert to paying principal) are still ahead. 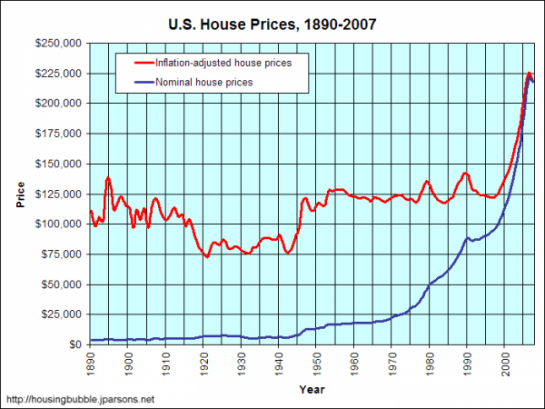 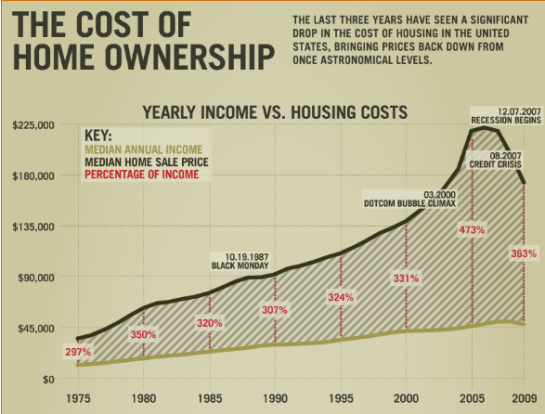 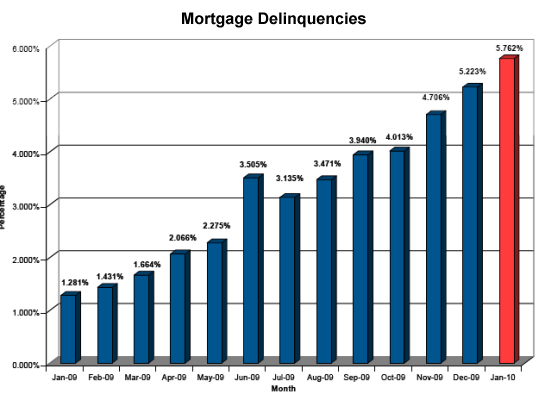 Rising interest rates offer yet another headwind to rising home valuations. Add all these factors together and there is simply no factual basis for expectations of a "recovery" of housing values to bubble-era heights.

Lagniappe projection. Housing bubble authority Robert Shiller found that over a long period of time, housing rises about 1% in adjusted terms per year. If this were to continue to be valid, then we can project that the current "realistic" valuation of the house which sold for $210,000 (in 2010 dollars) in 1987 would be about 25% higher, or $262,000, today.

Anything above that price is bubble-era margin which will disappear as prices revert to pre-bubble valuations.