I've been discussing the U.S. dollar since January (Could the U.S. Dollar Rise 50%? January 12, 2011), based on a simple trading observation: it's the most despised investment on the planet. Warren Buffett famously said "Try to be fearful when others are greedy and greedy when others are fearful."

This is a classic description of contrarianism: that the way to reap big profits is to do the opposite of the herd. By what metric do we measure extremes of greed and fear?

There are various technical tools like the VIX "fear index," but if there were a perfect measure then everybody would be using it, and then of course it would lose its edge.

Another way of saying the same thing is to buy what's completely hated and sell what's over-loved.

At this juncture that would suggest selling AAPL (Apple) and buying the U.S. dollar, which is almost universally expected to go to zero. Let's stipulate that barring drastic political changes which are unlikely, the case for eventual devaluation or destruction of purchasing power via inflation is strong. As Jesse at the always excellent Jesse's Cafe Americain recently noted, the question is when.

Another way of stating this same trade is gold is destined for $3,000/ounce and oil is inevitably on its way to $300/barrel. The reasoning behind such projections are sound: as the dollar loses purchasing power, then gold and oil will rise when priced in dollars.

These kinds of projections are mirrored by some wild claims for stocks: that Apple will be the first $1,000/share stock, that the Dow is heading for 36,000, and so on. The question is: what sort of conditions will be present when all this happens? If it takes $1,000 to buy a loaf of bread, then $1,000 for a share of Apple stock might well be cheap.

As I have noted before, there really is only one trade in the global markets: the U.S. dollar on one side and everything else on the other. Stocks, the euro, the yuan, real estate, precious metals, commodities, bat guano, quatloos, you name it, they're all trading in tight correlation against the dollar.

The ubiquity and virulence of anti-dollar sentiment reminds me of the sentiment toward gold in 2000. Gold had underperformed for 18 years, while stocks had made dizzying gains in that same time span. Buying gold in 2000 was for the deranged or sadly deluded. Looking back, selling stocks and buying gold at $300 an ounce in January 2000 was a very low-risk and profitable investment.

When sentiment is extreme, then that can be taken as a contrarian signal. Nothing is more hated and loathed than the U.S. dollar, which is widely perceived as on a one-way slide to Doom. If we stipulate this is a high-probability endgame, the question for those trying not to lose purchasing power is: when will it go to zero, and under what conditions?

My point here is simple: only rarely does consensus line up so powerfully behind one meme. It is accepted without debate that the dollar is going to zero, and those who state this as being as obvious as gravity (Marc Faber, for example) do grant that it can rise temporarily as a trade.

As a trader, I don't see much payoff to betting the dollar is doomed if the endgame is 10 years out, or even 5 years out. A lot can happen in 5 years.

This is why I have bought UUP, an ETF that goes up when the USD goes up. (This is disclosure, not a recommendation; please read the HUGE GIANT BIG FAT DISCLAIMER below.)

One reason I am seeking contrarian trades is the present zeitgeist reminds me of very strongly of mid-2007, when the global financial situation was obviously precarious, yet stocks remained at elevated levels for another year before imploding. I rather doubt the Status Quo can extend and pretend for another year, as it has already taken unprecedented gambles for the game to continue the past three years. But maybe they can play the thing out another year; the more energy and money it takes to keep the Status Quo afloat, the more strain is being placed on the system.

Bubbles take a while to pop, and the length of time they continue inflating often defies reason. In 1999 the voices of reason said the stock market bubble was already dangerously inflated, yet it continued inflating for another year. When will the current global bubble pop? That is unknowable, but the clock is definitely ticking.

Courtesy of Jesse, here is a long-term chart of the dollar (USD) as measured by the DXY index. 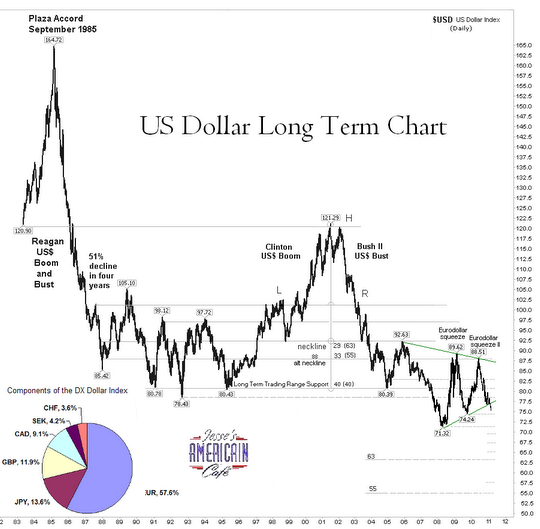 Here is a chart I published last week, courtesy of Harun I: The Fed's Most Dangerous Game: Checkmate (April 11, 2011)

Other observers are also seeing signs that a reversal is likely in the USD, for instance, the always insightful dshort.com: dollar due for a bounce?

I've marked up a chart of the DXY with some observations. As you can see, there is an upside target of 88, which represents a 17% gain from today's price. That's not great, but if everything else tanks, 17% might look bountiful to those who can't play the short side and must be long something. 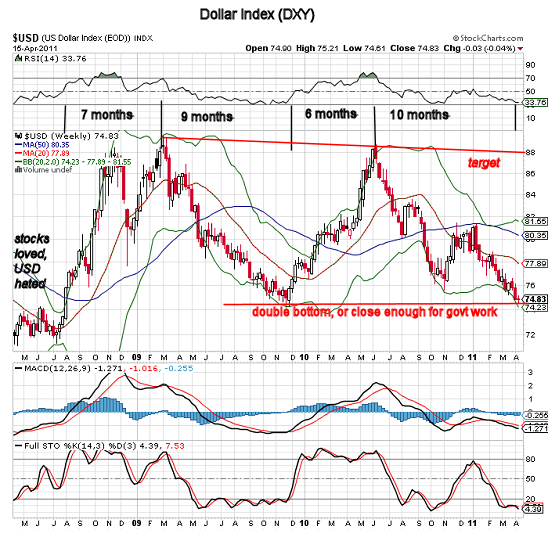 Notice the pattern of the past few years: the dollar declines for 9-10 months and then rebounds for 6 or 7 months. Interestingly, that suggests the dollar might rise until late September or October, and then reverse in November, a seasonably positive turning point for stocks.

It's not very complex, but being long the dollar until October and then switching over to play a rebound in stocks looks like a potential trade. This is only the freely offered rambling of an amateur observer, of course; do your own analysis and make your own decisions.