My new book "Resistance, Revolution, Liberation: A Model for Positive Change" is now available in the Kindle eBook format. 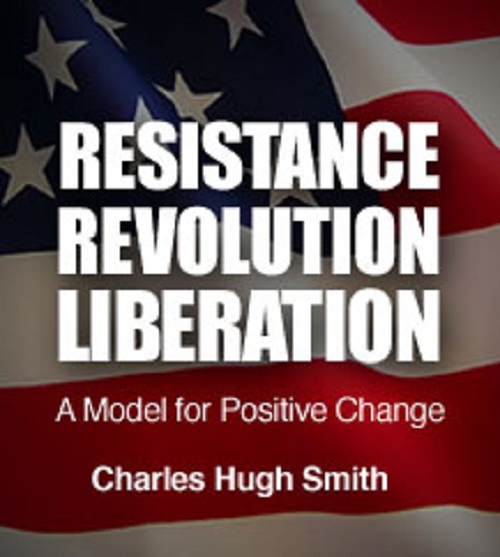 My summary of our unsustainable system and the pathway to a sustainable economy and society are laid out in my new book, Resistance, Revolution, Liberation: A Model for Positive Change.

The book will be available in a print version later in April, but for now it is available as a Kindle eBook at about a 10% discount ($8.95) from the list price of $9.95 through April 6: Resistance, Revolution, Liberation Anyone can read a Kindle eBook on any device; just download the free Kindle reader app for PCs, Macs, iPhones, iPads, etc.
Kindle for PC
Kindle for Mac
Kindle for iPhone
Kindle for iPad
Kindle for Android

I want to apologize to all of you who took the time to email me but did not receive a reply over the past six weeks. Rewriting this book absorbed every shred of my dwindling mental energy and time, and I will be a much more responsive correspondent once they pull the crushed keyboard from my catatonic fingers and my shattered mental health recovers a bit.

I am excited about this book because it ties together human nature, political and financial structures and our internal experience of liberation.

It will be unlikely to attract much of an audience until things are really falling apart, which may take upwards of a decade. I honestly hope readers don't agree with everything in the book, as dissent is the stabilizing force in any social system.

To give you a taste for the scope of the book, I'm publishing the Introduction in two parts (part 1 today, part 2 tomorrow).

When we see the word revolution, the shared imagination conjures up images of violent political upheaval. I use the word not to denote the bloody overthrow of a political order, but to describe a blossoming of understanding so profound that it leads to peaceful transformation of our social order, economy and culture.

Concerted action flows from ideas that make sense of what no longer made sense in the old worldview. Thus a revolution in understanding leads to transformative action in the real world.

When a set of ideas share a coherent structure, we call it a philosophy. This book presents a unified philosophy of human nature and the transition of destabilizing social orders to new arrangements.

This book differs from other works of philosophy and political economy in three important ways. First, and perhaps most importantly, it is conscientiously limited in length. Contrary to popular supposition, it is far easier to write a long book than a short one. (I know, because I have written both.) Each chapter of this book could easily be expanded into a much longer work, but I have accepted the much more arduous task of composing a limited-length book that embraces a broad spectrum of ideas.

Second, it has long been a truism in the academic sector that produces the vast majority of books on philosophy and political economy that clarity and simplicity cannot possibly capture serious thinking. As a result, only work that is intentionally difficult, that is, linguistically codified for academics only, passes muster.

This perverse inversion of insightsimplicity and clarity are rejected in favor of the intentionally opaqueresults from the political structure of academia, which requires elaborate gatekeeping to conserve the existing order. Adding to the confusion is what we might term hard-science envy, the social sciences yearning for the rigor of the quantifying sciences. These two unspoken forces within academia have fostered a norm that substitutes technical jargon for readily accessible thinking.

Those seeking a secure position within the system self-select data-driven (i.e. mimicry of hard science) topics of inquiry. Simply put, broad speculation, especially the variety which subverts the Status Quo, has been selected out of academia. By devolving to career-driven signifiers recognizable only to other academics, serious thought has fully detached from the economy as we live it. Not coincidentally, in detaching from the real world, academia parallels the nations tarnished financial sector, which has also unmoored from the real economy, and the Central State, which has abandoned the interests of the many to serve the interests of the few.

In effect, academia, government and the financial sector select out, corrupt or marginalize anyone challenging the Status Quo. What remain are trivialized speculations that threaten no power structure and superficial analyses that implicitly support a parasitical and predatory Status Quo by studiously ignoring the pathologies of our social order and economy.

As a result of these forces, public intellectuals from academia, government and the government-dependent private sector are incapable of critical thinking that threatens the intellectual foundations of the Status Quo. In the current system, their financial self-interest can only be served by joining the Upper Caste of the neofeudal social order and loyally serving powerful financial and political Elites (the modern-day equivalent of landed aristocracy and nobility). The pool of leadership has thus been poisoned as potential leaders have been corrupted into complicity. Leadership of the peaceful transformation to a sustainable, just and free society thus falls to all who have opted out, been selected out or marginalized; the citizenry must lead, as their leadership has become hopelessly corrupted by the system that enriches and empowers the Upper Caste and the Elites it serves.

To understand the irrelevance of Status Quo serious thought to our situation, we might profitably turn to Buddhas Parable of the Poisoned Arrow, in which the Buddha differentiates between academic questions about a poisoned arrow lodged in ones chestwho shot it, what species of wood is the shaft made of, and so onand the practical urgency to remove the arrow. If we pause to ponder all the possible technical and metaphysical questions raised by our colliding crises, we will expireand without the answers we so distractedly sought. We are running out of time to parse irrelevancies.

Those benefitting from our sociopathological, neofeudal Status Quo (as well as those who have been persuaded that their participation benefits them) will see no need for revolution. Indeed, they will view any transformation as a threat to their personal share of the Status Quo perquisites. But fundamental transformation is no longer a choice, whether you believe the Status Quo serves your self-interest or not. The unsustainable will crumble and another arrangement will take its place.

Given the entrenched nature of the neofeudal Elites and the Upper Caste that serves them, it is no surprise that revolution carries a negative connotation, as if any change that isnt instigated and directed by our corrupt leadership is considered illegitimate and dangerous to the social order. As noted above, that which is unsustainable will crumble regardless of the wishes of those benefitting from the Status Quo. Shall we call this inevitable crumbling positive because it is undirected by a coherent philosophy, and any coherently directed transformation negative because it places the interests of the many above those of the few?

Perhaps the Status Quo has it backward, and it is the uncontrollable dissolution of the unsustainable financialized State that we should fear, and the peaceful, transformative revolution we should welcome as a positive development for alleven those who cling to all that is unsustainable.

Part 2 of the Introduction will run tomorrow.

Posts will be sporadic this week as I'm taking some time away from the machine.