If the stock market can never crash again due to the Bernanke Put, then why have all the crash test dummies been ordered up?

I know, I know: the stock market will never go down because Ben Bernanke and the other central bankers won't let it. It's funny how the "Bernanke/European Central Bank Put" is ranked alongside gravity as a rule of Nature until markets roll over; then talk shifts from purring adulation of central bankers' godlike powers to panicky calls for another flood of liquidity/free money to "save" the market from the harsh reality of global recession.

The crash test dummies know better: they've been called up for a humongous crash. 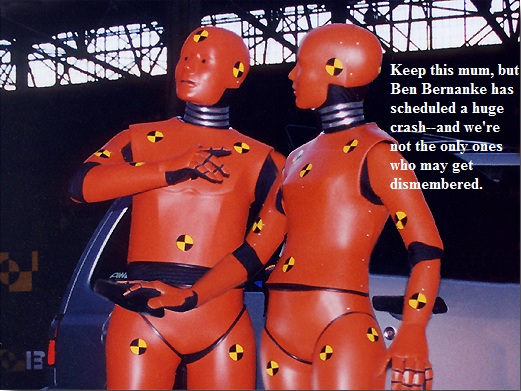 The basic mechanism that is being overlooked is Liquidity Resistance. This is akin to insulin resistance, where insulin becomes less effective at lowering blood sugars. The amount of insulin required to maintain normal blood sugar levels increases as resistance rises until even massive doses of insulin no longer have the desired effect and the system crashes.

Liquidity has the same dynamic. Back in the good old days of 2008-09, a $1 trillion tsunami of liquidity was enough to save the global debt machine from implosion and spark an enduring global stock market rally.

The current rally since late December required (by some estimates) over $3 trillion in global liquidity injections from central banks. In four years, the market's resistance has skyrocketed: where $1 trillion launched a multi-year global rally (goosed along with QE2 and Operation Twist when it began to falter), now $3 trillion yielded a 100-day rally that is already coming apart at the seams.

You see where this is going. To maintain the veneer of normalcy, i.e. a continuing Bull market, the next liquidity injection will have to be $5 trillion, and it will spawn a rally of perhaps 50 days. That $5 trillion will probably break the global market; if it doesn't, then the next tidal wave of $7 trillion (or whatever the market needs to trigger another high) most certainly will.

At some point, the liquidity injection will fail to boost the market at all, and that will trigger a panicky rush for the exits.

None of this is new or surprising. One technical tool of interest is the Coppock curve; this chart is courtesy of frequent contributor B.C.: 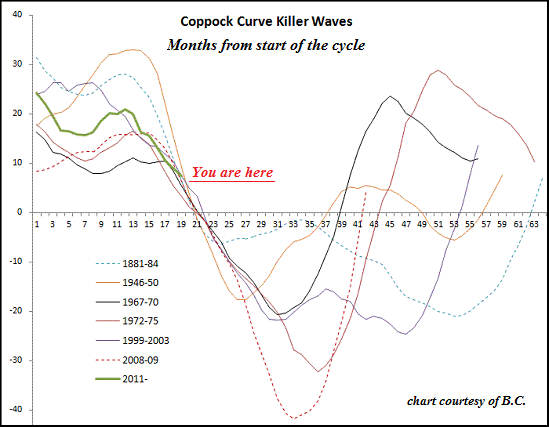 Those who argue that "this time it's different," i.e. that markets can inflate essentially forever on the "juice" of liquidity, are conveniently overlooking Liquidity Resistance. The crash test dummies have been ordered up, and not because "this time it's different:" they've been ordered up because central bank manipulation is not a law of Nature, it is an artifice of increasingly marginal effectiveness.


Planning your spring garden? Longtime oftwominds.com supporter Everlasting Seeds has a deal for you. At my request, Everlasting Seeds prepared a variety pack of non-hybrid seeds just for small gardeners like myself. If you've never planted a garden but always wanted to give it a try, this is the perfect opportunity to get started. Longtime gardeners will enjoy trying a different mix of veggies.


Three New Podcasts now available: Macro Analytics podcasts with Gordon T. Long (about 20-25 minutes each). Each podcast is accompanied by a number of interesting charts; check out all the recent shows with Ty Andros, John Rubino, and three with Gordon and myself discussing these topics:
Fake Wealth Creation
The "Let's Pretend" Economy
Financialization