Correspondent Cheryl A. (and other readers) have inquired about the dollar. As usual, I turn to Harun I. for charts and elucidation.

Let me start by saying I don't know where the dollar will be relative to gold or other currencies in 5 years, and neither does anyone else. Harun notes signs of a trend reversal, but always adds that price must confirm. The charts don't offer a fundamental reason for the dollar to strengthen against gold and other currencies, and so pundits and analysts (including me) try to discern (or invent) reasons which might explain a trend reversal.

Venerable Dow theorist Richard Russell recently opined that the need to pay down debt might raise demand for dollars, lifting its relative value (thank you Craig M. for the link):

A few years ago I wrote that debt in the US was so huge that it constituted a "synthetic short" against the dollar. What I meant was that in due time there was going to be a debt crisis, at which time the much-maligned dollar would be in great demand. The demand would stem from the fact that dollars would be needed to carry debt or to pay off debt. People and corporations would desperately need dollars to stave off bankruptcy. That time might be now. And it's Wall Street that needs dollars desperately unless you want to include all those people who face foreclosure on houses that they recently purchased.

Astute reader Rainer H. recently noted the extremes in sentiment on the dollar:

I have looked at the last 200 years of the US dollar and we are presently at 200-year lows on the charts and in purchasing power.

Last November the Market Vane hit 4 days in a row a low of only 13 percent bulls on the USD index! This is an extreme low reading and I never argue with those kind of readings.

This is always an indicator of a major bottom. On the other side the Market Vane readings, Gold, Silver and Copper have hit extreme highs long time ago. When I get readings of 92,96 or even 98% bullish readings, that indicates an extreme top. I have never seen or heard of anything higher than 98% as it can never go to 100%.

Let's look at some charts. The comments on the charts are mine and not Harun's. Here are his general comments on the dollar's technicals, and a brief observation on the interplay of the USD and interest rates:

The technical structure of these markets suggest a turn at the primary level but that has yet to be confirmed by price. Look for trends to develop in the fall or early next year.

The trend, by my metrics, is still down, however a cycle (leg) appears to have ended. The inverted head-and-shoulders pattern in the Swiss Franc/USD RS is ominous (the measuring implications are staggering). The problem is that, against gold and commodities, all currencies would be destroyed in regards to purchasing power should these formations (Swiss Franc, Japanese Yen) complete.

In regards to the economy and the Fed, its an endgame. The Fed cant justify raising rates and wouldnt do it if it could (with banks trying to raise capital it would make it much more difficult to do so in a rising rate environment). To lower rates would put greater downward pressure on the USD. But the long-term debt market will move rates higher because potential creditors will want more risk premium. This puts everything back to square one. There are no scenarios with a good ending. All should be disabused of the illusion that the Fed ever had control. 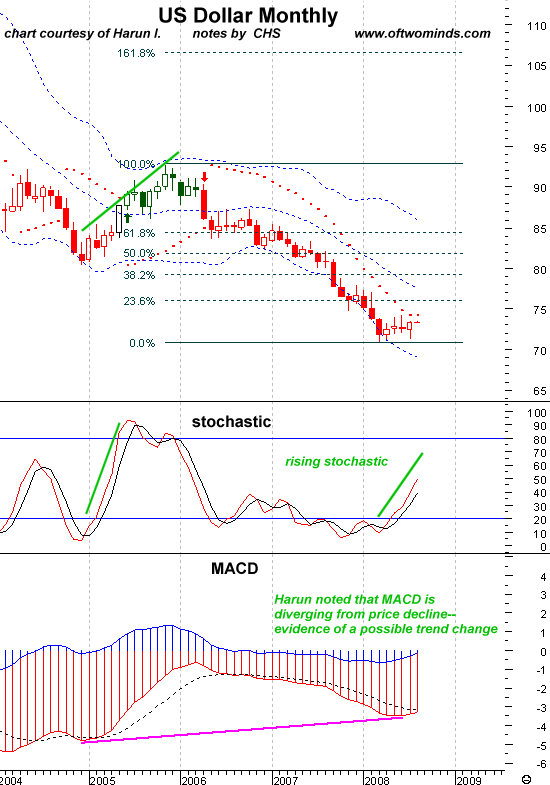 Here we see a divergence in MACD which suggests a potential reversal of trend. 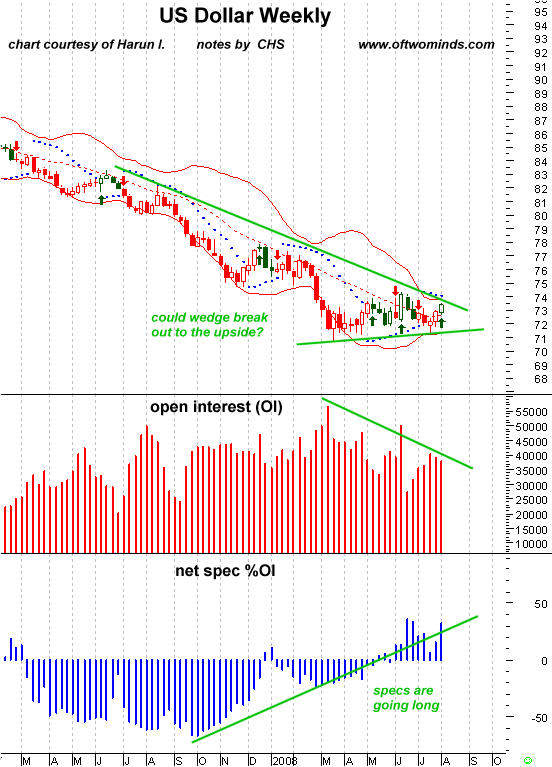 A wedge formation usually breaks up or down in a major way, and with specs going long we have to be open to the possibility of a break to the upside. 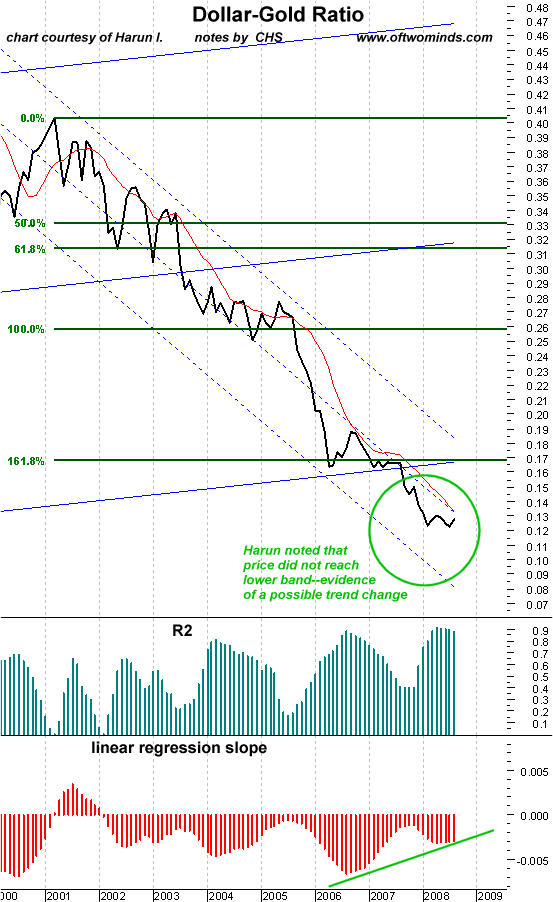 The stunning decline in the dollar's purchasing power, measured in gold, is painfully visible here. Nonetheless there are indications (noted on the chart) that the trend might be changing.

One fundamental which few seem to discuss is the preponderance of non-U.S. ownership of U.S. bonds and other debt. How can we discuss the dollar and not ponder the enormous ownership of Fannie Mae mortgage debt and Treasury bonds by Chinese banks and other overseas investors?

Those who speak of hyperinflation and a dollar sinking to near-zero have to consider what such wealth destruction would do to these non-U.S. held assets. They would be essentially wiped out.

Haha, the joke's on them, right? Not so fast. The U.S. is totally dependent on those overseas investors' willingness to keep buying hundreds of billions of dollars in low-yield bonds and debt instruments to keep U.S. interest rates low and to finance our stupendous Federal deficits and trade deficits.

Destroy those owners' holdings in dollars and you take away the single most critical prop to low interest rates. Just how anxious do you reckon non-U.S. investors will be to buy more dollar-denominated debt if you recklessly destroy a few trillion dollars of their current holdings? "Oops, our bad, please buy another couple trillion of our debt, pretty pretty please" is not going to cut it.

In other words, a dollar declining to near-zero is simply not an option. Wiping out the dollar's value means you're wiped out the wealth others have entrusted to our nation via buying our staggering mountains of debt. They will not be willing to sink good money after bad, which means U.S. interest rates would skyrocket, crowding out all government spending other than debt service (paying interest on the trillions in new and old deficit spending).

Housing, the auto industry and the entire edifice of our must-have-low-interest-rates consumer economy would crumble as rates double and triple.

Other nations caught in the asset-deflation/recession we are now entering could rely on vast domestic savings to fund their government deficits--for instance, Japan. The U.S. has no such luxury. In fact as stocks, bonds and real estate all decline in value, Americans will have less and less cash to invest in their own debt.

Yes, it is an endgame. The only way to keep The Empire of Debt afloat is to enable ever-more massive borrowing, and that requires enticing buyers of ever-rising issuances of new debt (T-bills, mortgages, etc.). Long-term, the only way to keep buyers in dollar-denominated debt/bonds is to maintain the relative value of the dollar by raising rates.

That's my analysis, and of course I could be wrong. For a diametrically opposed view, here is a well-argued position by Chris Laird (thanks to correspondent RSD for the link). US Dollar Final Decent - Dangers 2008-2009 Part2

RSD was also kind enough to send along some commentary on the above article by a contact of his who writes several internationally read columns and one major newsletter on finance/investing/survival.

I think the article you sent about the dollar was probably correct, at least the major points. No matter how much I try to find a means for a USA recovery, I can't do it. The biggest reason the dollar isn't crashing already is foreign holders of US debt are in so deep there is no way they can get out without destroying what little value they have left.

The dollar also benefits from having little competition. The euro is too new, the Swiss franc is too small, and the yen is too limited. That's why many nations are starting to form and trade baskets of currencies. In effect, they are creating a new currency where no individual component presents an unacceptable risk to the collection. It's a smart solution. Favored currencies are from countries that are rich in energy and natural resources. Russia, of course, still does mega barter deals, a skill it honed during the communist years when its currency had no international value.

Some countries are beginning to do the same because worldwide inflation is eroding the value of paper money nearly everywhere. (Actually it is vapor money being eroded since 95% of all transactions are electronic.)

Roubini released some bank numbers today and they are frightening. He said 8% of the 8,500 US banks insured by the FDIC are in serious trouble. That's 700 banks. Another 8% to 16% are also shaky, and many will fail. Meanwhile, the FDIC says it is only worried about 9 banks.

Joe and Sally (Consumer) are in even worse shape. Debt to disposable income has risen to 140% vs "only" 100% in 2000. Hell, the whole country is a giant bubble - and there isn't anybody big enough (or dumb enough) to bail us out. I think we may be looking at a Jericho (the TV show) scenario without the atomic bombs. I saw an interesting cartoon in the current New Yorker magazine. An armed man who was holding up a bank handed the teller a note that said, "Give me all the money in my account."

I think my estimate about how much cash to have may have been low. "Mattress liquidity" may become much important than I predicted during my former period of bubbling optimism you know so well.

Thank you, RSD, for sharing these cogent comments. In conclusion: regardless of all our guesses, price is the ultimate predictor. If this dollar rally fails and it breaks support at 71, then it could drop to 52 or so on the DXY (dollar index).

If it breaks to the upside, then the Fibonacci projections on the monthly chart (above) suggest it could rally to 93 or even 107. We shall see.

Thank you, Jamie P.G. ($20), for your awesome and generous donation to this site. I am greatly honored by your support and readership.