Now that "demand destruction" (people driving less, replacing SUVs with Priuses, etc.) is in the news, respected pundits are calling for $70/barrel oil. Don't count on it.

The "big news" is oil consumption has dropped in the U.S. by 700,000 barrels per day (BPD)--about 3.3% of the 21,000,000 BPD the U.S. consumed last year. Concurrent with this decline, the OPEC exporters boosted production, as shown by this chart (courtesy of theoildrum.com): 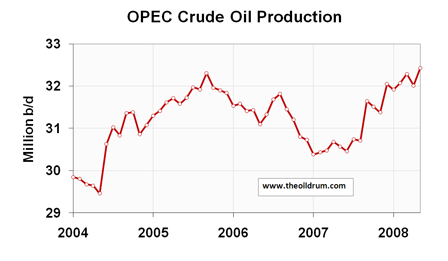 Here is non-OPEC production, which has declined: 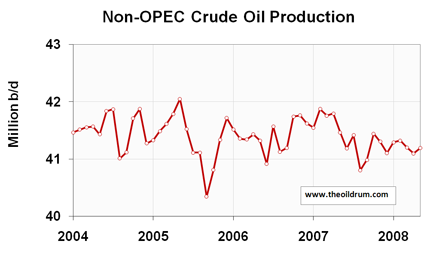 Frequent contributor U. Doran sent in this detailed report on global supply, which has country-by-country production charts: Oilwatch Monthly - (Netherlands) August 2008. Here is quote which describes one constraint on future supply increases: a shortgage of equipment and personnel:

Nevertheless, these production additions have proven to be insufficient for consumption to continue its onward path of increase. The production part of the equation prices can only do so much as there is material and personnel available for drilling. The latest global offshore rig order count now totals 165 for just the next three years, from a total existing amount of 584 offshore rigs. A huge increase in such a short space of time. To man those rigs and provide ground personnel approximately 16.500 new employees are needed in just the next few years. Already there is difficulty in acquiring new personnel. This new cycle of oil industry material buildup will therefore inherently be constrained by delays that are not about to ease.

Arjun Murti, an energy analyst at Goldman Sachs:What we have now is geopolitical peak oil.

Western companies are far better than most national oil companies at finding and extracting petroleum, experts say. They have developed advanced exploration technologies and can muster significant financing to develop new fields. Many of the worlds exporting states, however, have spurned their expertise.

Oil company executives see a straightforward explanation: a trend known as resource nationalism. They contend that they have been shut out of promising regions by a rising assertiveness in the Middle East, in Russia, in South America and elsewhere by governments determined to keep full control of their oil.

If we look at a chart of global oil production, we see it's bouncing around a plateau since 2005--in other words, this is as good as it gets, production-wise: 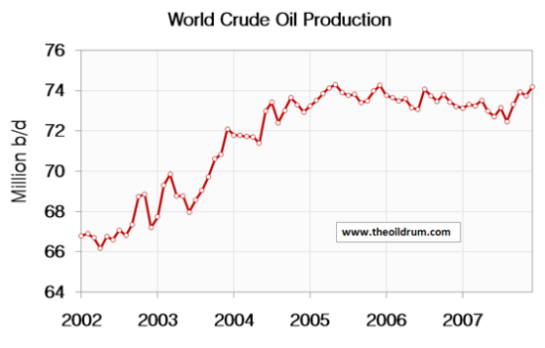 In other words, exporters are pumping full out and supply has reached the upper limit of real-world capacity. As this chart reveals, OPEC's spare capacity has dwindled to a mere shadow of its former glory. The Saudis boosted production this year by 500,000 BPD and that appears to be about all they can manage in the real worlds, despite claims to the contrary.

Given that most of the incremental new conventional production comes from Saudi Arabia, and almost all from the middle-east, I wouldn't be too sure about this being a sustained uptrend. Especially given the production decreases in Saudi-Arabia /Middle-east that preceded this uptrend.

It also makes it unlikely that a large share is from 'new' production.

The comments on The Oil Drum are generally very well-informed and I highly recommend reading the comments in the above link.

A number of other factors suggest supply will be falling in tandem with demand, keeping prices high. And by "prices" I mean in gold; if the dollar falls again, then oil will rise in cost since it's priced in dollars; if the dollar strengthens, oil will become nominally "cheaper" to those of us buying it in dollars.

But if demand falls by 5 MBD (million barrels a day) and supply falls by 6 MBD, then prices will continue to rise.

One of the TOD comments reported that the Saudis are pumping 6 million gallons of water into their supergiant oil fields every day to maintain output of 4 MBD. The source said this pressure will keep production aloft until the water rises to the pumps--at that point production doesn't decline, it basically falls to zero very abruptly. Boom, the world loses 5% of its oil supply.

You can quibble about new production coming online and a thousand other details about global oil, but the fact is we consumers still rely on a handful of depleting supergiant fields for about half of all the oil we consume. The fields in the North Sea, Mexico, Russia and the Mid-East are in decline, and are requiring ever-more expensive recovery techniques to maintain production.

It is not at all unlikely that global production could fall 8-10 MBD, or basically drop back to 2002 levels. If demand also falls by 10% globally, then no harm, no foul-- prices remain in equilibrium. But if demand falls by less than supply, prices could rise despite global recession.

Another factor is the Export Land Model which reflects the skyrocketing demand within oil exporting nations. As their domestic demand skyrockets due to subsidies and domestic needs (remember the 1 million barrels a day the Saudis plan to burn to generate fresh water in quantity), the amount of oil available for export plummets.

Lastly, we need to be realistic about just how inelastic demand for oil is in the U.S. and much of the world. There is no alternative, and a global recession is not the best time to be expecting tens of millions of consumers to go out and buy new vehicles. Recall that there are 230 million vehicles in the U.S. alone.

Nonetheless I have long expected a "head fake" in which demand falls rapidly enough to fall briefly below supply, causing a sharp downward spike in price. The question now: was the drop from $147 to $112/barrel the head-fake, or is this just the first leg down in a more prolonged head-fake which drops the price to $90?

One of the TOD commentators noted that the tax structure in Russia guarantees that once oil falls to $90/barrel, the producers earn basically zero--the taxes eat up all profits. So we should also be aware of the tremendous forces within exporters to lower supply in order to keep prices "high."

How high? here's a chart which depicts oil as a percentage of global GDP.

From the exporters' point of view, the world managed to spend 7% of GDP on oil, why not keep it at 7-8%?

For every household in the U.S. which buys a hybrid and saves a few gallons of gasoline a week, there is a Chinese household which buys a new car--a car they probably won't drive much. Thus they can afford a little gasoline even at $5-$10/gallon.

There are also new motorscooter owners in Asia who only need a few liters of fuel to operate their business, and they will pay whatever the cost might be, as they need it to make a living and the quantity of fuel required is small. In other words, it's high-consumption Americans who will feel real pain at $8-$10/gallon; much of the rest of the world will do just fine because they use so much less per capita.

That's another reason to doubt a massive drop in global consumption.

Here's my previous charts of the "head-fake" and a chart I posted in March illustrating the probable climb in oil prices as the excuses that all price increases are the result of "speculators". If only it was that easy; it may well be that this "head-fake" has already run its course, setting up the next rise in price which then triggers another "head-fake" which lowers prices until supply again falls below demand. 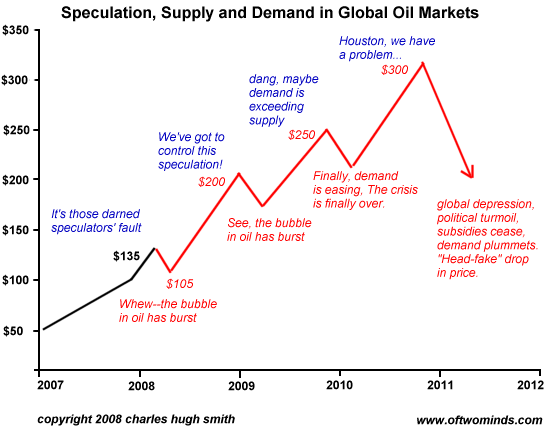 Maybe algae-based biofuels can be scaled up to 100 million barrels a day, but it's unlikely to come online fast enough to replace oil in the next few years/decade. Maybe I'm wrong and alt. energy will scale up more rapidly than many of us expected; but that will require literally trillions of dollars of investment, right at the point that credit and capital are in deflationary spirals downward. Where to get the trillions? That is a key question I have raised before. Now that we spent all our surplus capital/earnings (as a nation) on interest on new debt, BBQ grills and granite countertops, 2nd homes we don't need, MRIs, drugs that don't work, lavish public pensions, stealth aircraft and a host of costly wars and boondoggles, then there isn't any left for funding an entirely new energy complex.

is now available on amazon.com. The price is currently listed at a default of $15, but I am working on getting it lowered to $10.99. Check back later in the week to order a copy at the lower price.

Thank you, Herbert W. ($50), for your outrageously generous donation to this site. I am greatly honored by your support and readership.