Japan muddled through the past 20 years because its vast domestic savings self-funded its stupendous public debts. That dynamic has reversed, and the consequences cannot be pushed aside for much longer.

Japan's debt crisis has been building for a decade. Back in 2001 I wrote an essay on Japan's exploding debt and the dire consequences of what I called Japan's Runaway Debt Train (2001):

Imagine, if you can, an economic Hell in which the U.S. government was borrowing 40% of its annual budget, creating annual deficits of 900 billion dollars a year; where 65% of all tax revenues were gobbled up by interest payments on a mind-boggling $13 trillion public debt; and where there was no conductor in sight to stop this runaway debt train.

Welcome to Japan, where that Hell is reality.

Interestingly, a mere nine years after I described the "nightmare scenario" of Japan's ballooning debt, the U.S. is in fact borrowing 43% of its Federal budget and running deranged deficits of $1.5 trillion a year. All that's left for us to "catch up" with Japan's no-exit situation is for Federal debt and interest rates to rise such that 65% of the Federal tax revenue of $2 trillion a year is spent on interest--that would be $1.3 trillion a year.

I am confident we can reach this amazing goal, fellow citizens, because we now need to borrow that $1.5 trillion every year just to maintain the status quo. As for interest rates, they are sure to rise by leaps and bounds, as the insatiable demand for deficit spending leads nations everywhere to borrow sums which will exceed global savings.

It's the law of supply and demand: the amount of new loans (demand for capital) will far exceed the supply of capital. Hence the cost of capital (interest rates) will rise dramatically.

There are two interesting questions here:

1. How did Japan stagger onward for nine more years?

2. Is it finally nearing the end-game of rising debt and a stagnant, deflationary economy?

Once again, the answers are to be found in basic supply and demand.

But a funny thing happened on the way to permanent self-funded national debt: demographics is destiny. In a nutshell, as Japan's savers have aged, they've cut back on savings and started raising cash for their retirement. 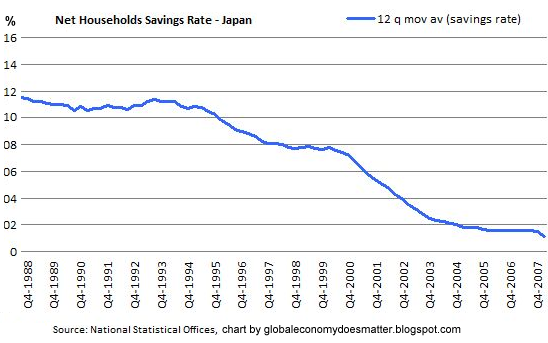 Making the demographic tidal wave of savers retiring worse is the low wages and savings rate of the next generation. Millions of Japanese aged 25 to 34 toil as temps or contract employees-- up from 1.5 million 10 years ago, according to the Ministry of Internal Affairs. These workers tend to earn about one-third the typical "salaryman" wages that their fathers earned: Japan's Lost Generation (from 2007, which shows that very little has changed).

As global competition and low demand at home has hollowed out Corporate Japan, Japanese companies have pursued the same pathway to flexible, low-cost workforces as U.S. firms: a heavy reliance on contract/free-lance and part-time jobs with few to no benefits.

Put a savings rate approaching zero together with a national debt that exceeds 200% of GDP and a "lost generation" earning far less than their parents, and you have a nation on the slippery slope to insolvency.

Those in denial about Japan's reliance on ballooning debt to fund its status quo (and on America's exact same reliance) basically claim that "It can't happen because it hasn't happened."

That is magical thinking, not reasoning. Japan funded its gargantuan debt by corralling its citizens' stupendous savings. Now that Japan, Inc.'s policies have undermined the nation's balance sheet and its savers are retiring, then there will no longer be a giant pool of domestic capital to exploit.

That means Japan must start competing on the world market for capital (that is, it must find foreign buyers for its government bonds), which means interest rates will rise on Japanese debt. That will push up borrowing costs, which already eat up 2/3 of Japan's entire tax revenues.

(As for the U.S.: anyone who thinks America's structural Federal debt is less than $1.5 trillion a year is delusional, as is anyone who believes that the Federal deficit will magically shrink in the years ahead.)

Japan was able to buy itself 20 years of stagnation because its populace saved vast quantities of money which they dutifully handed over to their government in exchange for low-yield bonds. In contrast, U.S. households save very little and buy very modest amounts of U.S. Federal debt. About half of the "owned by the public" Federal debt is owned by non-U.S. players. ( Treasury Direct.)

It all comes back to supply and demand. The demand for new sovereign borrowing (selling government or quasi-government bonds) is insatiable: Japan, the U.S., and the E.U. must all float trillions of dollars in new debt each and every year for the foreseeable future. What if the pool of capital drops below this ravenous demand? The cost of "renting" that capital--the yield/interest rate paid--will skyrocket.

"It can't happen because it hasn't happened." Japan, the E.U. and the U.S. will all discover soon eneough that the false logic of magical thinking cannot counter the reality of imbalanced supply and demand of capital.