The sentiment and media news flow is so uniformly Bearish that I think the herd is running hard--and that makes me hesitant to join it.

I am seriously demanding you read the HUGE GIANT BIG FAT DISCLAIMER below before reading further because I am conducting a highly speculative thought experiment, NOT offering investment advice. This is the freely offered ramblings of an amateur observer, and nothing else.

The only problem with being Bearish on the stock market now is that everyone else is Bearish, too. Frankly, that's extremely Bullish. In my many years of observing the stock market, it seems the ideal time to go short is when complacency is running high and bad news is being discounted--say, just like the state of the market in late April, 2010, just before the wheels fell off and the market began its slide to July lows. (Never mind the "flash crash.")

The reverse is also true. The time to get Bullish is when everybody hates stocks, loves bonds and junk bonds, when the financial media is groaning under the weight of Bearish commentary and charts and the few remaining Bulls are dismissed as cheerleaders or mocked as perma-Bulls, and when various charts, historical data and omens all predict that a crash is just around the corner.

That's what bottoms look like, not tops. Yet the herd is running fast and hard, expecting a crash or a sharp decline in September and October, because that's what "should happen" for a number of good reasons: the economy sucks, and historically the market tanks in those months.

Except when it doesn't. How many times does the stock market do what it "should" when almost everyone expects it to?

Let me put it another way: If you really think the market will crash or tank bigtime in mid-August or September, then when do you sell? Do you wait around for the crash? Heck no. You sell long before the anointed window of crashability opens.

We all expect the market to crash or decline, so we sell, but some mysterious group of clueless money managers who have read the same Bearish stories and pondered the same Bearish charts for months on end have been clinging onto huge portfolios of stocks, waiting to sell during the crash? This set-up for a crash makes no sense.

This is what happens when the herd is running--we are powerfully drawn to join it. The desire to join the herd for safety is undoubtedly rooted in our mammalian brain--the one that guides the herd instinct of gazelles and other prey. The hyenas and lions know the drill; let the herd run and then wait for the weak and ill to fall behind. Easy pickings. This is why the hyena is known as "the doctor" on the Serengeti: they have an uncanny knack for identifying the weak and sickly prey.

So when we sense risk or danger, we instinctively join the herd. And the herd is running full-tilt Bearish. Equity funds have seen billions flow out for months, while bond funds have experienced net inflows in the hundreds of billions. Investors running with the herd have been snapping up risky junk bonds as if the risk was near-zero, while stocks with fat dividends have been sold off like they are guaranteed to fall 50%--and give you ebola as a parting gift.

Here are just a few of the stories being headlined in the financial media:

Is a Crash Coming? Ten Reasons to Be Cautious (Wall Street Journal)

Does anyone seriously think the Hindenburg Omen has any meaning left when it's being trumpeted by the Wall Street Journal?

If that doesn't give you pause, then what will?

Everybody knows everything now. The only "alpha" left is that gained by insider trading and quantbots skimming pennies by the millions. Every traders' edge is already known and posted everywhere: put-call ratio, measures of investor sentiment, Hindenburg Omen, every technical indicator known to humanity, every currency pairing, you name it--it's out there, known to all.

Since everybody knows everything, they also know nothing of value. Take "investor sentiment." We all know how this works: when sentiment is extremely Bullish, it's a sell signal, and when its extremely Bearish, it's a buy signal.

Since we all know this, does it even work anymore? Right now there is no extreme, and some are arguing sentiment is way too complacent to be Bullish. Here is the Investors Intelligence Survey--you can reach your own conclusions about its import.

According to this survey, the percentage of Bullish investors rose and that of Bears dropped. In other words, investors are getting Bullish as the market tanks. Is there any predictive value left in information when every other investor, punter, manager and speculator all know the same data? Is there any value in a "head and shoulders" pattern that everyone anticipates?

It's like we're all watching the herd to see which way it swerves--but every creature in the herd is also watching.

The only truth I see is that the stock market is widely and remarkably well hated. We all know the market is rigged, and that High Frequency Trading is 70% of all trading and thus this blatant manipulation is the only force propping up the market from a well-deserved crash. We're all waiting for the crash that "should happen" and for more hand-drawn signs to pop up in the hands of pedestrians on Wall Street reading, "Jump, you f**kers." That is the zeitgeist of the nation: disgust, and a simmering resentment that the skimming, looting, collusion, fraud, misrepresentation, barely-concealed embezzlement and regulatory gaming continues unabated in the incestuous parastic machinery of Congress and Wall Street.

Everyone who bet that yields on Treasury bonds would rise has had their head handed to them on a platter, while everyone who ran with that herd and bought bonds has profited. (I have no position or opinion one way or the other on bonds at this time.) The momentum of the herd is its very source of safety. Until it runs off the cliff.

Is this the chart of a market poised to crash big and crash hard? I don't know; everybody else sees the same charts and indicators, so knowing about "the death cross" and the Hindenburg Omen and the yen-dollar pairing and all the rest has lost any predictive value. 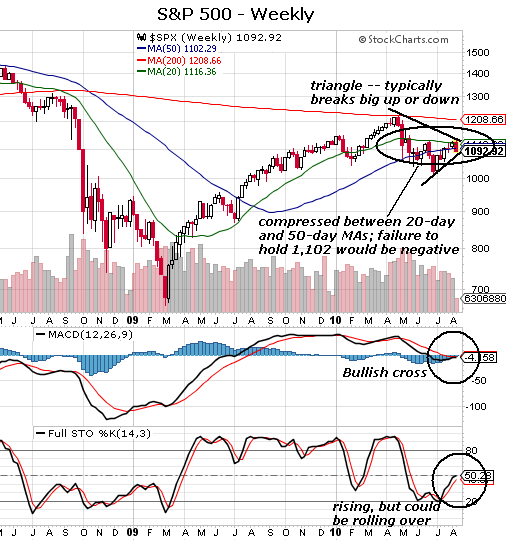 Here is the result of my thought experiment on sentiment: I don't place much predictive value on all the published surveys of sentiment, because everyone else knows them, too. By definition, once the watchers are watching each other for "signs," omens, and fool-proof sentiment indicators--when the sentiment metrics hit extremes, then we'll all buy or sell at the same time--they've lost all predictive value.

My own "proprietary thought-experiment" reading is based on unquantifiable tendrils of media news flow and cultural zeitgeist. It is currently pegged firmly at Bearish, which makes me skeptical of predictions of a crash or major decline just ahead.

It might happen, just as "everyone" expects--but as Jesse Livermore noted, the market takes along the fewest possible participants when it moves.

This is not investment advice in any way, shape or form--it is only a speculative thought experiment. But if you value thought experiments, this site humbly accepts donations of any amount (for instance, the equivalent of the low-fat, low-foam mocha coffee with a dollop of whipped cream that's sitting next to your laptop) to help offset its maintenance costs. ($7,301 would also be much appreciated; that's only $20 a day, plus $1 to make it a prime number--something my esteemed colleague Patrick of patrick.net recommends. A $7,301 contribution would make you eligible for the unique benefits of being the official Oftwominds.com Site Sponsor.)

The Bullish Case for Stocks Part 2 will be published tomorrow.

Full disclosure: I have been long the DIA from $98 in early July and have some highly risky, highly speculative calls on BAC. This is a disclosure, NOT an implied recommendation to buy, sell or trade any security, currency, bond, futures contract, or quatloo hedge. Do your own due diligence, research and risk management if you have money at risk.