Remind Us Again Why Anyone Should Own Stocks For the Next Two Years   (August 3, 2011)


Here's the case for dumping stocks and not touching them for at least two years.

The case for "buying and holding" stocks boils down to four words: don't fight the Fed. Forget moral hazard and all the fancy stuff; the reason to load the truck with stocks is that the Fed is invincible, and its mighty machinery of manipulation can drive stocks higher no matter what else is happening.

Put another way: when the Fed succeeds in driving the dollar to near-zero, the value of stocks will be near-infinite.

The case to dump stocks now and not even look at the market for two years is based not on worship of the Federal Reserve's infinite wisdom and power but on the charts. The abject, pathetic, remarkably complete failure of QE2 has driven a stake through the heart of the Fed's political power and its reputation for wisdom; it has been revealed as a clueless cabal, basing policy on textbook models of what "should happen when we do this." Alas, real life doesn't follow moldy old PhD theses, and it doesn't worship the Fed or listen to the cargo-cult incantations of the Keynesians.

Financialization anf globalization have run their course, along with cheap abundant energy. As the giant 17-year bubble in stocks deflates, those entrusting their money with Wall Street face stupendous risk and potentially massive losses. (Shameless pitch alert.) My new book An Unconventional Guide to Investing in Troubled Times is all about withdrawing your trust from Wall Street and investing your capital in alternatives such as localized, productive assets which do not depend on financialization or globalization for their value or income streams. (It's currently #5 in the Kindle Store's investing category, and #9 in Amazon's Investing Bestsellers category, so there's some interest in the topic.) You can read the first chapter and other stuff here.

Let's let the charts speak for themselves, shall we?

Here is the S&P 500 from 1965 to 2011: note the giant double top, and the gigantic bubble which began inflating circa 1994 as financialization and globalization began their long domination of the economy.

Only massive government intervention reinflated the bubble in 2009-11, and now gravity is reasserting itself. The trendline projects to the next low around 600, while the bubble-retrace projects to around 450.

Since volume is the weapon of the Bull, let's check in on volume: oops, it's been dropping since 2009. Looks like those in the know have been selling into strength bigtime. 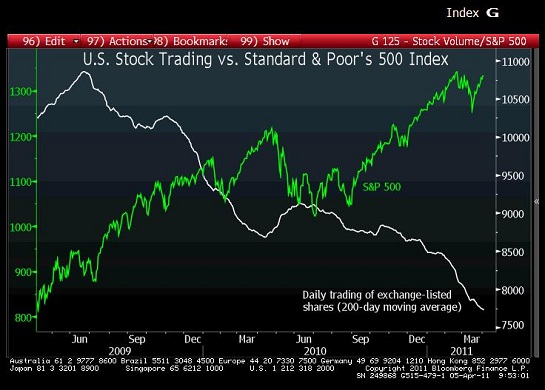 Courtesy of the always insightful Doug Short, here is Doug's overlay of the current market and two previous stock market bubbles, the Dow 1929 and the Nikkei 1989. Note that the market was rolling over last August, but the Fed launched QE2 and added a year to the "recovery." Can they extend it another year? based on their dwindling political capital, the answer is "unlikely."

Interestingly, the low hit by previous bubbles corresponds rather closely with cycle-seer Martin Armstrong's turn date of July, 2013. (He also pegs August 2014 and September 2015 as turn dates as well.)

This overlay of the 2002 decline and the current market also offers food for thought. As in, "this sucker's going down." 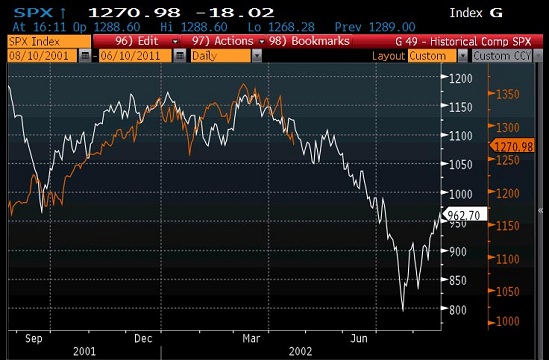 Again courtesy of Doug Short, the Q Ratio, which is at highs not seen since the last market top.

Since the U.S. dollar and the SPX have been on a see-saw for years, it's interesting to compare the DXY's recent decline with its action back in the summer of 2008, just before the global financial Ponzi scheme imploded.

And to state the Bullish case, here's the Fed's pet parrot: 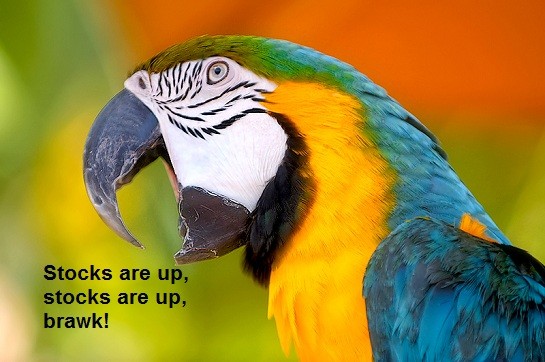 Looks like they'll need to teach it another line.


NOTE OF THANKS: Thank you to everyone who wrote positive, encouraging emails in response to the weekend entry--I have read and savored every one. Due to the press of events and workload, I am unable to respond at this time. To those I owe books to: please be patient, I hope to have worked through my backlog by next week.

Many of you expected a reduced schedule of posts. Rather than post three times a week, I will be going into hiatus for 5 to 10 days at a stretch, then going back to a daily schedule. Times are getting interesting and there is still much to discuss.