The Bogus Global Prosperity of the past (bubblicious) 13 years depended on an explosion of leveraged debt. But the global economy still depends on an even more pervasive leverage: that offered by petroleum/fossil fuels.

We all know how financial leverage worked to inflate bubbles in dot-com stocks and then global real estate. Investment banks took $1 million in cash and spun out $40 million in paper to be sold as "low-risk," AAA-rated investments.

Other forms of leverage which flourished like bacteria on milk-soaked bread were derivatives such as credit default swaps and CDOs (collaterialized debt obligations) and old stand-bys like margin (leveraging $1 in cash to buy $2 in stocks).

If financial leverage is dramatically reduced throughout the financial system, the multiplier offered by extreme leverage goes away, too. Without the leverage offered by fractional lending, the number of real estate and all other forms of debt-based transactions declines. As demand is strangled by the dwindling of leverage, then assets based on easy credit and nearly unlimited leverage decline, too.

In present-day U.S.A., that means virtually all assets, because all asset classes have been buoyed by borrowed money/leveraged debt.

Another form of leverage is fast disappearing, too, with even greater ramifications for the global industrial economy: easy to access fossil fuels. The rapid decline in oil from $147/barrel to $40/barrel qualifies (in my mind at least) as the "head-fake" I anticipated: a dramatic drop in oil prices due to recession that then sets the stage for shortages (supply/demand imbalances) a few short years ahead.

Oil and natural gas leverage capital, which can be seen as the stored surplus of human labor. Try pushing a compact car on flat ground--never mind up a hill--and you quickly realize the tremendous energy content of gasoline: it's basically on par with TNT/dynamite. The discovery of oil/natural gas enabled tremendous expenditures of energy which were leveraged by relatively modest investments of capital.

The pressurized supergiant fields of Texas and Saudi Arabia required only $1 per barrel of investment (not an exact number, but in the ballpark) to extract many times that value in easy to store and transport energy.

That stupendous leverage enabled "modern civilization" to flourish. Now that leverage is shrinking. The supergiant fields which produce most of the world's oil are in rapid decline; the easy-to-get petroleum is depleted. The pressurized oil fields ("gushers") are mostly depleted, so costly, high-tech methods such as pumping CO2 into wells are needed to maintain production.

These costs can run as high as $20-$40/barrel, meaning there is virtually no leverage at all when oil is $40/barrel. Even worse are the "unlimited" tar sands of Canada which currently produce but 2.5 million barrels a day of the globe's 85 million barrels a day: extracting and refining the sticky goo requires vast quantities of natural gas. Costs for these "alternative sources of petroleum" can run $40-$50/barrel.

Few alternative sources of energy provide much leverage; all require massive amounts of capital. How about geothermal? Don't you just drill a hole and then let the steam flow? Yes, that is the general idea, but it's not that simple; little things like caustic natural chemicals can corrode the pipes, and then you have to store the electricity that's been generated.

We as a civilization stand on the threshold of the end of cheap/leveraged petroleum. The challenge is simple: can we use the last of the leveraged petroleum to build a stupendously costly replacement energy system before we run out, or do we maintain the status quo, dabbling in alternative energy ( i.e., building perhaps 5% of current total energy consumption) until the cheap, easy oil/gas is mostly gone, and it's too late?

This is where the "market" completely fails. The "market" places no value on the ecosystem of a forest; it only sets a value of the lumber which can extracted. The market for petroleum does "look ahead," but the spot market for oil does not price in Peak Oil until it's too late. Literally until the last day, the market will assume the supply of 85 million barrels a day will hold steady--until it doesn't.

When supply falls off rapidly, the market will respond with extreme price hikes: $300/barrel seems entirely feasible, with $1,000/barrel a rational target as the slide in production quickens:

"Deleveraging" is a powerful explanatory concept not just for the Coming Financial Depression, but for the coming shortage of energy. It's easy to forget that the production of food in developed economies is entirely dependent on cheap, abundant oil: even the fertilizer is made from natural gas.

So as the leverage provided by cheap oil goes away, the cost of producing food rises, as does the cost of ground transportation, shipping, air travel, etc.

The ramifications of the end of leverage, both financial and fossil fuels, are far-reaching. Just for starters, we can anticipate the decline of global tourism, and the allocation of far more of global incomes to food, water and transport. That will leave less income to devote to consumer goods and government.

Even the best-case scenario is sobering. Even if we as a species somehow manage to make the sacrifices needed to invest trillions of dollars in new energy sources, the cost of that system will be much higher than the one provided by cheap oil and gas. The "energy tax" will be far higher, and thus the amount of money/income left to spend on consumer goods, government, pensions, etc. will be far less than most current anticipate.


It was a half hour after dawn and the early morning light provided enough illumination to the living room via the large broken picture window and open doorway to Eduard Morgans home. Mark had regretted allowing his aunt Maria to come back to the home with him to check things out. She was now knees down on the carpet next to Eduards body sobbing with her face buried in her hands.

Holiday gift announcement: maximum two signed books per customer: Signed copies of Claire's Great Adventure (perfect for that impossible teen on your "gotta get them something, arggh" list) are limited to two per customer: $12 for one (includes $2.58 postage), $22 for two.

The regular price on amazon.com is $16.99; the $12 (incl. shipping/postage) is a special offer I am making to readers. Please send $12 via check (email me for an address) or via my Paypal account with instructions on how to inscribe the book, and I will mail the book(s) directly to you. If you'd like to read other readers' reviews before buying a copy, the cover image below links to the amazon.com page and two readers' reviews. 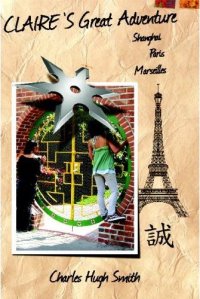