Even though home values have plummeted by a third, property taxes are increasing: welcome to the Great Middle Class Squeeze.

You might think that with home prices off by 30% or more since the housing/credit bubble popped in 2006, property taxes would have declined by a similar percentage. But you'd be wrong: they've gone up. As if the massive reduction in home equity wasn't enough of a blow to the Middle Class, they're also paying higher property taxes.

Though house prices have declined roughly 30% nationally since the 2006 peak of the housing bubble, property taxes have continued their decade-long rise, jumping $45 billion (over 10%) since 2008.

Local governments are responding to declining revenues by jacking up all taxes and fees. To counteract sharp declines in property values, municipalities are raising their property taxe rates, squeezing more out of properties even as they drop in value. Though there are local variations, the result is the same: property taxes are rising.

Even as assessed valuations slumped by over 13% annually, property tax revenues statewide increased 2.1% to $8.8 billion--a $181 million increase to taxpayers. Though Washington state has limits on property tax increases, local government's property tax rates do not rise or fall with assessed value--they're set by budget requirements. So falling prices do not translate into lower property taxes.

In Oregon, a voter-mandated statute limits increases in assessed value to 3% a year. As a result, assessed values are still lagging market prices, which soared in the housing bubble. In Multnomah County, the average assessment of $174,000 is $100,000 lower than average market values. That means property taxes can increase 3% a year even as home prices slip. So property taxes won't fall until market values fall below assessed value, and that would require further massive declines in home prices.

In northern New Jersey,property taxes are rising by as much as 12% in some municipalities, after skyrocketing 80% over the past decade, far outstripping the consumer price index (31% rise) and household incomes (up 24%).

Nationally, property taxes now dominate local tax revenues. Property taxes tripled from 1990 to 2005 in Florida, for example; once the local government obtains that gargantuan revenue stream, it becomes the "baseline" for all future years. 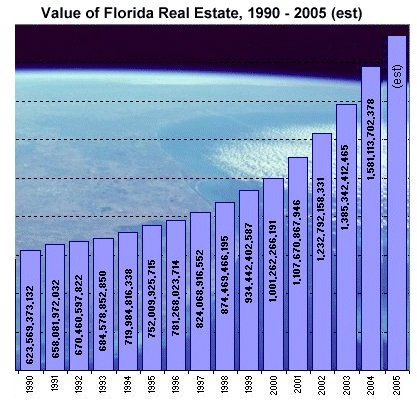 Local governments should go back to the revenues and budgets of pre-bubble years, but instead they are jacking up rates to maintain revenues, even as valuations have fallen off a cliff. Bubble-era prices and equity are gone, it seems, but bubble-era property taxes are here to stay.

A decade ago, property taxes were roughly equivalent to sales taxes. In 2000, property taxes totaled $247 billion and sales taxes came in at $223 billion-- a differential of roughly 10%. Sales taxes have increased by 28% since 2000-- roughly in line with the rise in consumer prices (as calculated by the Bureau of Labor Statistics).

Add all this up and we can see that local governments have become far more dependent on property tax revenues than they were in 2000.

No wonder they're jacking up property tax rates.

California property taxes have been limited to 1% of assessed value by the voter-mandated Proposition 13, passed in 1978. Assessed value is limited to a 2% increase per year. Additional parcel taxes can be added only through voter-approved bond measures and "special assessment districts" which fund municipal water districts, libraries and other local government services.

But assessed values are re-set to market valuations when a property is sold. As millions of homes were sold during the boom years, the assessed value of those homes skyrocketed, reaping huge increases in property taxes for local governments in California.

A random selection of homes in the San Francisco Bay Area yielded these representative increases (addresses are not listed due to confidentiality concerns, but property taxes and sales figures are all public records, easily accessible on sites such as zillow.com.)


Once this home was sold at a bubble-era valuation, then the property tax more than doubled, and then rose 10% from 2006 to 2010 as local "special assessment districts" levies increased.

Now that the home has sold for $185,000 less than its tax assessment (a drop of 25%), then the property taxes collected will certainly decline by a similar percentage. Multiply that by hundreds of thousands of homes sold for less than bubble-era valuations, and it paints a bleak picture of major declines in property tax revenues for local government.

Homeowners in many locales can petition the property assessor's office to lower the assessed value of their homes; if granted, such reductions in value can substantially lower property taxes.

This is no guarantee that your property taxes will stay low for long, though. Anecdotally, one reader from a state without Prop 13 limits wrote that he petitioned the county for a reduction based on lower valuation, which was duly granted. But that $1,200 reduction was largely offset by a $700 increase resulting from a higher tax rate.

That's still quite a leap still from the pre-bubble annual tax of $2,500.

Either by re-assessment or by sales, assessed property values are falling around the nation. While local government can jack up tax rates by 10% or more annually, at some point those substantial increases will likely trigger resistance from homeowners who continue to see their home values stagnate or decline.

The property tax cash cow will likely get leaner as a result, and local governments will have to slim down budgets to match the new realities of lower property values.

Here's a simple suggestion for local government: go back to the pre-bubble budget of 1996, and add in the inflation since then--39%. That would be fair and transparent.


10% off all orders from Everlasting Seeds holiday special offer.

New recipes on What's for Dinner at Your House?--Elsewhere Cafe Muffins, and Louisa's Vegetarian Baked Beans