Santa has delivered a stock market rally right on time, but participants are sloppy-drunk on the strong spirits of confidence and complacency.

The holiday punchbowl is brimming with confidence that the "recovery" is "real" and the Fed will never let stocks fall. Market players are celebrating by getting sloppy-drunk with complacency. There may be a dash of cranberry juice for flavor, but the primary ingredients in Santa's rally are absolute confidence in a number of factors:

1. The Fed's POMO bond buying/speculation-goosing program is irresistible: "don't fight the Fed" means equities will be going up as long as the Fed is buying Treasuries. In other words, forever.

Let me pour you another cup of "juice," brother, to celebrate a market in which declines are now officially "impossible."

2. The "recovery" is limited to the top 20% of the households, but that's good enough when coupled with euphoria-inducing statistics (new claims for unemployment dropping from 424,000 to 417,000--wow!) which don't show more people being hired, just fewer people being fired.

As long as things aren't visibly getting worse in the statistical pulse readings, then that is "proof" the "recovery" is "real."

Let me top off your cup, pal, because the top 10% skimmed enough bonuses to boost the overall income numbers--even if the bottom 60% saw household incomes decline, the surge in the top 10% negated that decline and made the overall number edge up.

3. The "China story" is alive and well: China can expand its money supply by 19.5% a month forever, because hey, the Central State controls everything--except inflation, of course, which is running rampant. And the Shanghai stock index has fallen 13% this year, but no worries, mate, China's appetite for everything will grow forever. That will fuel a global rally in commodities to at least 2525.

Wasn't it incipient inflation which sparked the unrest that led to Tiananmen Square in 1989? Oh never mind, pour me another one. This time it's different.

4. Europe's debt crisis is fixed. The politicos there keep saying it, so it must be true. Severe austerity is the answer, it seems, meaning that tens of millions of households will be receiving less income. Exactly how that will drive a "recovery" in spending, borrowing and general expansion of all the good things is life is unknown, but stock markets the world over are hitting highs not seen since 2008 or even 2007.

5. Corporate profits in the U.S. are skyrocketing to record highs--$1.66 trillion, a whopping 11% of the entire GDP. Of course 50% or more of U.S. global companies' profits are earned overseas, which means the declining U.S. dollar sharply boosted their profits in 2010.... and now that the dollar is surging, then that boost turns into a drag.

But never mind--analysts are calling for record profits to get even more sumptuous in 2011. Why? because the trend is up, fool! Get long the market now, and buy the tiniest dips or you'll be left behind as the market roars to new highs. Don't be a chump.

6. Heavy-hitters are rotating out of bonds into equities because the writing is on the wall: the bond bubble is over, and smart money is leaping into equities with all four feet because that's where the hot speculative money is going.

7. The "wealth effect" from rising equities is all the Fed and the political class have going for them right now, and even if that wealth effect only registers with the top 20% of households, it's better than nothing, so they will never let the rally roll over.

8. Seasonality favors a bull run all the way through year-end as fund managers pump the market up to book gains--and thus bonuses. The Fed took care of the seasonally iffy months of September and October by staging a rally of such monumental proportions that you have to go back to 1644, just before the Ming Dynasty collapsed, to find a market which exploded with such bullish force.

(Ming Dynasty traders were supremely confident in 1644--after all, what could possibly rattle a dynasty which had ruled for hundreds of years? But never mind: history has little to teach us, because the Fed is all-powerful--and this time it's different.)

Did you notice something about the chatter around the punchbowl? There wasn't a single bear, not by the punchbowl, and not even in the room. Analyst Dave Rosenberg noted this recently--there are no bearish analysts left. One of my most experienced trading contacts emailed me the same comment: in an unprecedented development, not one of the traders, manager and players he knows is bearish.

We can see this is in these charts of investor sentiment from market-harmonics.com. The first chart shows the percentage of bulls has now exceed the peak which marked the precise top of the 2010 rally in early May. From that peak, stocks swooned over 15% in the next few months.

The only higher peak occurred at the multiyear top reached in late 2007. That data point should give bulls pause.

Market tops are easily identified as the bullish sentiment rises to highs at the same time bearish sentiment plummets to lows. We can easily see three such points: November 2007, at the market peak, May 2010, the year's previous top, and now.

Mr. VIX is reflecting a psychotic mix of extreme complacency followed by spikes of panic that the music has finally stopped. Higher highs reveal increasing volatility and fear, and lower lows reflect a trend of increasing confidence and complacency. Put the two together and you get a megaphone pattern, which often precedes a massive move to the downside.

Those pulling levers in the Fed are well aware of key technical trading levels. If they can goose the market above those levels, then black-box trading machines will start buying the rally just on momentum. That makes manipulating a market absurdly easy: just goose it in low-volume pre-market trading via heavy futures buying, then let the black-box trading bots loose at the open to carry the rally up in a "ramp and camp" move (patent-pending, the Federal Reserve Bank of New York).

Here we see the S&P 500 (SPX) has been pushed above the key 61.8% fibonacci retrace line, which has signaled the bulls that there is no more resistance, just place your buys and the market will reward you with instant gratification. 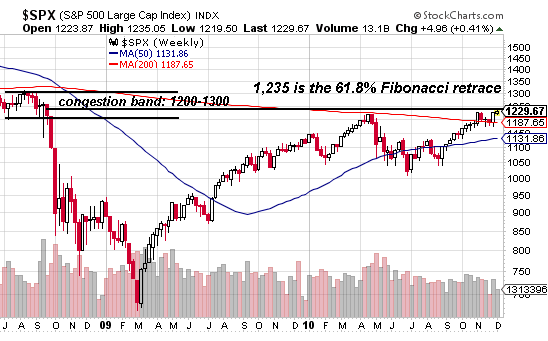 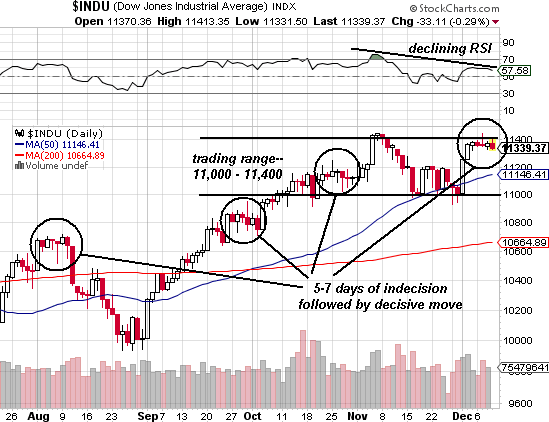 At least that's the thinking of the crowd staggering around the punchbowl, repeating the inane line "don't fight the Fed" as if nothing has changed in the world since August 2008.

Does anyone seriously believe the global economy is truly "healthy"? Does anyone truly believe that "extend and pretend" is the same as actually fixing what's broken in Neoliberal/Neocolonial/State/Crony Capitalism? It seems there are many such believers, and many others willing to promote the notion as a profession.

Maybe sentiment indicators have been rendered meaningless. Maybe the fact that everyone is supremely confident in the bullish read on reality simply means the bulls are in charge for the foreseeable future.

We shall see. Getting sloppy drunk on euphoria and confidence is fun, but the hangover is considerably less amusing.