It's Your Choice, Europe: Rebel Against the Banks or Accept Debt-Serfdom   (December 5, 2011)


The European debt Bubble has burst, and the repricing of risk and debt cannot be put back in the bottle.

It's really this simple, Europe: either rebel against the banks or accept decades of debt-serfdom. All the millions of words published about the European debt crisis can be distilled down a handful of simple dynamics. Once we understand those, then the choice between resistance and debt-serfdom is revealed as the only choice: the rest of the "options" are illusory.

1. The euro enabled a short-lived but extremely attractive fantasy: the more productive northern EU economies could mint profits in two ways: A) sell their goods and services to their less productive southern neighbors in quantity because these neighbors were now able to borrow vast sums of money at low (i.e. near-"German") rates of interest, and B) loan these consumer nations these vast sums of money with stupendous leverage, i.e. 1 euro in capital supports 26 euros of lending/debt.

The less productive nations also had a very attractive fantasy: that their present level of productivity (that is, the output of goods and services created by their economies) could be leveraged up via low-interest debt to support a much higher level of consumption and malinvestment in things like villas and luxury autos.

According to Europe's Currency Road to Nowhere (WSJ.com):

Northern Europe has fueled its growth through exports. It has run huge trade imbalances, the most extreme of which with these same Southern European countries now in peril. Productivity rose dramatically compared to the South, but the currency did not.

This explains at least part of the German export and manufacturing miracle of the last 12 years. In 1999, exports were 29% of German gross domestic product. By 2008, they were 47%an increase vastly larger than in Italy, Spain and Greece, where the ratios increased modestly or even fell. Germany's net export contribution to GDP (exports minus imports as a share of the economy) rose by nearly a factor of eight. Unlike almost every other high-income country, where manufacturing's share of the economy fell significantly, in Germany it actually rose as the price of German goods grew more and more attractive compared to those of other countries. In a key sense, Germany's currency has been to Southern Europe what China's has been to the U.S.

Flush with profits from exports and loans, Germany and its mercantilist (exporting nations) also ramped up their own borrowing--why not, when growth was so strong?

But the whole set-up was a doomed financial fantasy. The euro seemed to be magic: it enabled importing nations to buy more and borrow more, while also enabling exporting nations to reap immense profits from rising exports and lending.

Put another way: risk and debt were both massively mispriced by the illusion that the endless growth of debt-based consumption could continue forever. The euro was in a sense a scam that served the interests of everyone involved: with risk considered near-zero, interest rates were near-zero, too, and more debt could be leveraged from a small base of productivity and capital.

But now reality has repriced risk and debt, and the clueless leadership of the EU is attempting to put the genie back in the bottle. Alas, the debt loads are too crushing, and the productivity too weak, to support the fantasy of zero risk and low rates of return.

For years, European debt was being mispriced in the (over-liquefied, over-leveraged and over-speculated global) marketplace. Countries such as Greece, Portugal, Ireland, Spain and Italy benefitted immeasurably from the market perception that European monetary integration ensured debt, economic and policymaking stability.

Similar to the U.S. mortgage/Wall Street finance Bubble, the marketplace was for years content to ignore Credit excesses and festering system fragilities, choosing instead to price debt obligations based on the expectation for zero defaults, abundant liquidity, readily available hedging instruments, and a policymaking regime that would ensure market stability.

Importantly, this backdrop created the perfect market environment for financial leveraging and rampant speculation in a global financial backdrop unsurpassed for its capacity for excess. The arbitrage of European bond yields was likely one of historys most lucrative speculative endeavors. (link via U. Doran)

In simple terms, this is the stark reality: now that debt and risk have been repriced, Europe's debts are completely, totally unpayable. There is no way to keep adding to the Matterhorn of debt at the old cheap rate of interest, and there is no way to roll over the trillions of euros in debt that are coming due at the old near-zero rates.

Never mind actually paying down debt, sovereign, corporate and private--the repricing of risk and debt mean even the interest payments are unpayable. Consider this chart of one tiny slice of total EU debt: 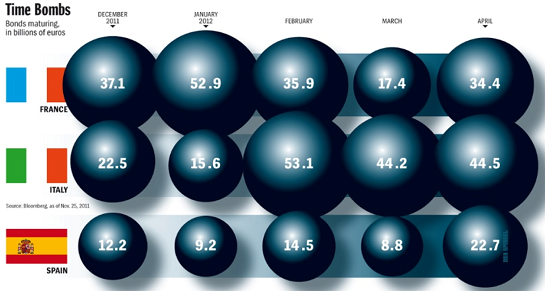 There is no way to push the repricing genie back in the bottle, and so there is no way to roll over this debt and add to it--and to support the high-cost structure of Euroland's welfare-state governments and their astounding debt, then debt must be added, and in staggering quantities.

Austerity won't put the repricing/bubble burst genie back in the bottle. A funny thing happens when more of the national income is diverted to debt service (making interest payments and rolling over existing debt into new higher-interest debt): there is less surplus available for investment and consumption, which means that both productivity based on investment and consumption based on debt will plummet.

This leaves the nation with lower productivity and lower GDP, which means there is also less tax revenues being collected and more bankruptcies as companies and individuals accept the reality that their debts cannot be paid.

The repricing genie responds to this decline in national income, surplus and taxes by repricing risk of default even higher, and so the interest rate is also repriced higher. This makes servicing the mountain of existing debt even more costly, and so even less national income is available for consumption, investment and taxes.

This is called a positive feedback loop: each action reinforces the other, i.e. a self-reinforcing feedback loop. Debt and risk are repriced higher, the burden of debt service reduces national income available for investment, consumption and taxes, which further reprices risk higher, and so on.

So you see, Europe, there is only one choice: either accept the endless debt serfdom of ever-rising interest payments and lower income and productivity, or rebel against your pathetic lackey leadership and renounce the entire mountain of unpayable debt. Grasp the nettle and renounce the euro as the fundamental cause of your fantasy and collapse, and revert to national currencies which enable the market to discover the price of your underlying productivity and ability to borrow money.

Renouncing the euro does not mean renouncing the freedoms of the European Union: the two are only bound at the hip in the minds of your enfeebled leadership, who are in thrall to the leveraged-26-to-1 banks that are poised on the edge of insolvency.

Let the banks implode in bankruptcy, clear the worthless "assets" of debt from the books, and let the market price currencies and everything else. The only other choice is debt-serfdom.

All the other schemes and proposals are simply variations of one single fantasy: that the feckless leadership can fool the repricing genie with parlor tricks. They can't. Everybody with any understanding of the situation knows that the debt bubble has already burst, and risk and debt cannot be repriced back to fantasy levels.

That repricing has already occurred, and cannot be revoked or shoved back in the bottle. The Great European Debt Bubble has already burst, and so now it boils down to a simple choice: debt serfom or open rebellion against the banks that profited so handsomely from the euro-fantasy.

There is no middle ground, as the debt cannot be repaid, not now and not in the future. It cannot be reshuffled, masked, or hidden; it can only be renounced.

It's your choice, Europe; choose wisely. If you want a model for sanity and growth, look to Iceland. They renounced their unpayable debts and debt-serfdom, and let the market reprice their currency, debt and risk. The nightmare is past for them; they chose wisely. Now it's your turn to choose.

The debt-serfdom will fall to you, not the banks or your Elites.