Unfortunately, many are being lured by the siren-song of apparent "bargains" in housing. But no financial bubble ever bottoms until it fully retraces to pre-bubble prices--for housing, that means prices circa 1996-1998.

It seems a "35% off" tag is good enough for thousands of new home buyers. Unfortunately, the item in question (housing) will be tagged with much deeper discounts in the years ahead. The temptations offered by the current "false bottom" are indeed high.

For years, even as her friends bought huge houses in the expensive Phoenix market, Elizabeth Child remained a renter.

But in January, the airline customer-service agent and her boyfriend closed on their first home. The three-bedroom, two-bath house, complete with granite countertops and a pool, had been listed for $340,000 in late 2007, but the couple bought it for $220,500. "Six months ago I didn't think I would own a home," says Ms. Child, 27 years old. "And now I do. It's so perfect." (excerpted from the WSJ.com story linked below)

A $100,000 discount certainly is appealing, but the more important questions for potential first-time buyers are:

1. Is it cheaper to own than rent, when all maintenance costs and property taxes are included?

Impatience is not a virtue when it comes to investing, but we can all understand how waiting for the final housing bottom tries the patience of those who have already waited years. As the Wall Street Journal recently reported: For Some, It's Finally Time to Dive Into Housing Market:

The housing bust is creating a new group of winners: first-time home buyers. People who sat on the sidelines -- often watching wistfully as their friends became homeowners -- are suddenly in a position to grab some great deals. Indeed, first-time home buyers made up 41% of all buyers at the end of 2008, up from 36% in 2006, according to a recent survey from the National Association of Realtors.

I would hazard that it's a bit early to declare new first-time buyers "winners." My prescient and provocative blogging colleague Dr. Housing Bubble laid out a steel-trap case for prices to continue falling until at least 2011: The Rise and Fall of the Southern California Housing Empire: Foreclosures, Bad Investments, and Psychological Deception (December 10, 2008)

One key trait of any financial bubble is the inevitability of the retrace to pre-bubble valuations. Consider by way of example the NASDAQ dot-com-era chart:

This chart illustrates another very common trait of bubble pops: prices often drop below the pre-bubble starting point in a panic reaction to apparently bottomless losses.

It's important to recall that the housing bubble was not a bubble in shelter--it was merely part of a global financial bubble which played out in real estate as well as in stocks. collectibles, etc. etc.

Now let's look at a chart of California median prices:

If we consider this the chart of a financial bubble, then we can deduce that prices of whatever asset this chart tracks will retrace to approximately 1998 levels, or $200,000, down from $570,000 at the peak.

One of the most pernicious consequences of buying in during a "false bottom" is the "capital trap" which snaps closed on the new buyer. I have updated my early-2008 Capital Trap illustration to reflect updated points in time: 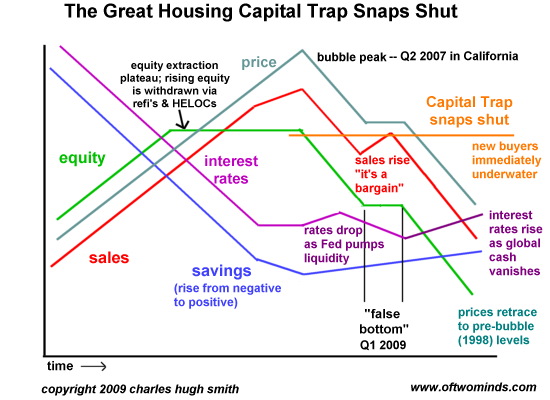 A capital trap simply means the owner cannot extract their trapped equity because both prices and demand have fallen. If you're immediately underwater after purchasing the asset, your desire to sell at a loss is understandably low. But even worse, if demand dries up, you can't sell at any price except a give-away one, i.e. close to the pre-bubble valuation.

When the capital trap snaps shut on new buyers, the consequences are not just a loss of equity: the buyer has also lost their mobility and their freedom to seek employment elsewhere in the nation. This will become increasingly important as layoffs and business closures spread into every nook and cranny of the U.S. economy.

But if someone is trapped in their house, either loathe to sell at a stupendous/total loss of equity or trapped by a dearth of buyers at any price, then this most fundamental "escape from poverty" strategy is no longer in their grasp. Indeed, when it comes to mobility, renting is far and away superior to owning.

Though I am a big believer in valuing all real estate in terms of its market rent, that is, how the asset performs as a business proposition in the real world, we have to be cautious of this metric as unemployment is very likely to drive rents much lower in many parts of the nation. The "silent killer" of rental properties as a business proposition is vacancies. A property can look quite attractive if rented 12 months a year; but if the economy spirals down then people will double up and move back home, removing considerable demand from the rental market in many locales.

Bottom line: a property which sits vacant for 20+% of the year is a losing proposition if it was purchased on the assumption of 100% occupancy and 0% vacancy. And property purchased for investment can be as much a capital trap as a owner-occupied home.

Lastly, we should recognize that trends do not last forever. The notion that buying real estate would, in the long run, be an easy avenue to rising equity and wealth may well be a cognitive capital trap.

My own view is that all available evidence suggests that investment opportuities will shift in volatile fashion for the foreseeable future; all attempts to predict long-range trends will be foiled. Rising equity, in this view, will go to those not wedded to any one strategy or asset class, but to those who refuse an ideological/quasi-religious attachment to any strategy of the past, i.e. "buy and hold stocks" and "real estate only goes up."

All this suggests that the illiquidity of real estate is a staggering impediment to earning high returns/protecting capital in volatile times. As scary as the stock and bond markets can be-- not to mention currency and commodities markets--at least you can exit your positions and go to cash with a click of a mouse button. Not so with real estate.

One last proviso. A position in gold, stocks, bonds, currency or commodities isn't going to need a new roof or new refrigerator. Houses fall apart rather quickly when not occupied, and a "bargain" that has sat vacant for many moons will probably require a lot more capital than just the down payment. 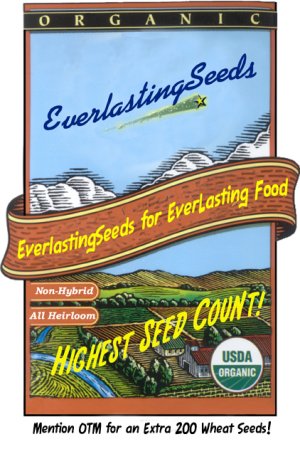