Forgotten Indicators: Is the Stock Market About to Turn Up?   (February 5, 2009)


Frequent contributor Harun I. shares an analysis of three largely forgotten indicators which may be suggesting the stock market is building a base for a Bear Market rally.

The first chart is of the NYSE Cumulative New Highs/New Lows. This is a cumulative measure of the difference of stock making new high and those making new lows. This indicator is below its 52-week SMA and is still declining as of 02/02/09. 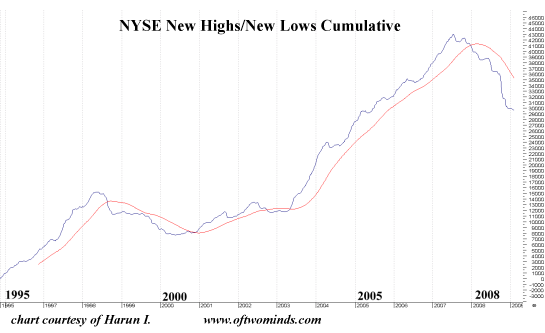 In 1998 this indicator stopped making new highs as the market indices (DJIA, SP 500, NYSE) also peaked. The divergence occurred when the indices bottomed in mid 1998 and rallied to new highs. The DJIA and NYSE peaked in 1999, the SP 500 in 2000. These advances occurred under market conditions of declining breadth. Issues making new lows began to out weigh those making new highs. This indicator slid below its 52- week SMA mid-1998 and remain there in a decline until 4th quarter 2000.

Note that while market indices were in a primary level correction, more discretely, the trend in stocks making new high began to overtake those making new lows late 2000, continuing until indices bottomed a second time in 2003. 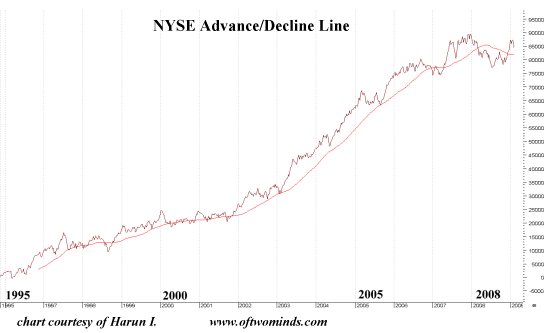 The NYSE Cumulative Volume Index (CVI). It is mostly coincident. Currently it is below its 52-week SMA and starting to decline after a bounce in late 2008. It is divergent with the A/D Line. 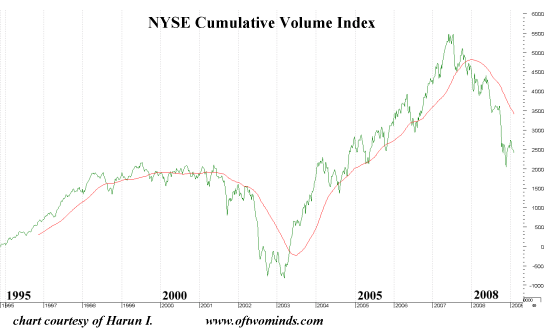 What will happen next is unknowable and not the purpose of this missive. As an exchange of ideas and information, it may be useful for the trader/investor to study market breadth. The greatest strength in these indicators is to be found when they are confirming and diverging. The AD Line above its 52-week SMA and failing to decline significantly, in my opinion, bears watching.

Thank you, Harun, for calling our attention to these divergences.

Here is an essay Harun wrote last year which remains highly relevant: The Principles of Trading Also Apply to Life.


NOTE: As I have house guests for a week, I will be unable to reply to email; my apologies to all correspondents.

New readers forum up and running! Thank you, reader D.K. for putting this together. Please note I am NOT a moderator and will only be able to drop in sporadically. Other readers have volunteered to moderate, so please be as respectful and cogent as when you write me directly.