After falling from last summer's peak of $146/barrel, oil has consolidated in the $35-$40/barrel range for several months and appears poised for a short-term rally--possibly a significant one.

Astute reader Dave D. recently requested a technical update on the oil market. He mentioned this entry from last September: Checking In on Oil's Head-Fake (September 18, 2008), and once again I asked frequent contributor Harun I. for some charts and commentary. 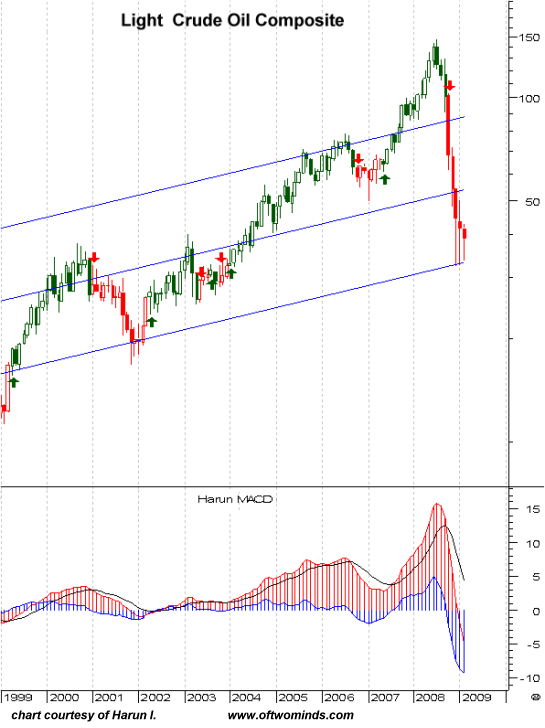 Chart 1.
This is a semi-log chart. Primary level virtual support (SE channel lower channel line) and annual/fourth quarter/January low has held. This has formed a triple bottom that may be better analyzed in shorter time frames. Currently the February bar has formed a hammer but there is still a week to go before this bar closes. The December, January and February bars indicate a rejection of the lows confluent with the lower channel line. Trading has remain within the range of December's bar. March will be important.

The challenges Crude oil will face at the primary level are: 1) maintaining upward momentum that successfully assaults the February (20-day) high. 2) testing the January high. The minor histogram of MACD is deeply oversold but has not given any indication of slowing downside acceleration. 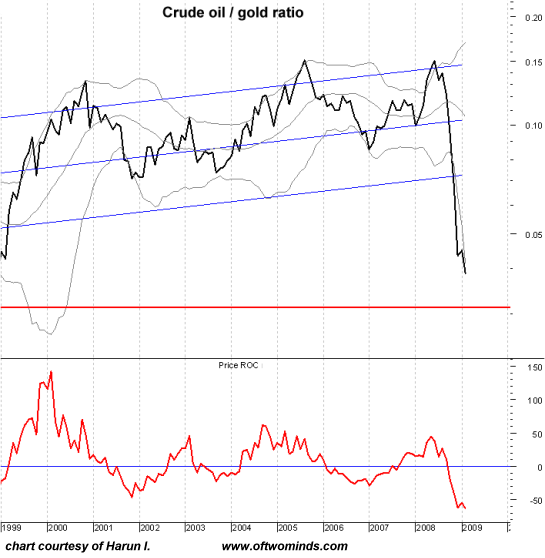 Chart 2.
Relative to Gold, Crude Oil is underperforming. The RS line is revisiting 1998 lows. Price has not followed, therefore Crude Oil is relatively quite expensive. The ROC (rate of change) is deeply oversold. Investor will want an asset that is outperforming or increasing their purchasing power. Absolute return traders may make more aggressive plays by betting on nominal increases, relying on leverage to increase wealth. 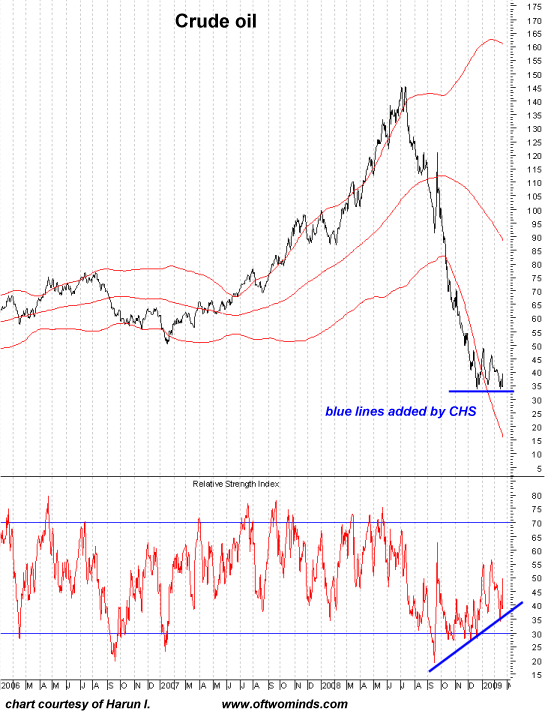 Chart 3.
The daily chart with 200-day Bollinger bands and RSI indicates the sideways movement of price. The 200-day mean is still declining. The triple bottom in price is not confirmed by RSI which has made higher lows. This may be a warning of a short-term or intermediate level rally.

Currently the trend in Crude Oil is down. The rapid price decline has led to a consolidation in the first quarter of this year. There is no rule that says there will be no further decline. Curiously overall open interest is still hovering near historic highs and Large traders net-percent holding are significantly long (not shown). The longer price trades in this consolidation, the support and resistance points mentions earlier will increase in significance.

Thank you, Harun. My crude takeaway (pun intended) is that despite horrifically nregative news on the global economy, oil refuses to drop below the $35-$40 range and it held a triple bottom--technically quite significant. The fact that Large Traders are holding net long positions tells me the smart money is expecting oil to rise.

Also, note how oil is bouncing off the lower channel. The last time it hit the bottom channel line in late 2001, the price popped dramatically soon thereafter.

Despite the technical headwinds, the price has built a decent trading range base. Given the RSI indicator is diverging and the ROC is in oversold territory, then a short-term rally looks possible and perhaps overdue.

In full disclosure, I have been long APC and VLO during this consolidation and am adding some May calls (options) in anticipation of a significant short-term rally. Please read the HUGE GIANT BIG FAT DISCLAIMER below; this is NOT trading advice, it is only a disclosure of my trading positions.

Books of interest mentioned this week:

Fruitless Fall: The Collapse of the Honey Bee and the Coming Agricultural Crisis

The Coming Economic Collapse: How You Can Thrive When Oil Costs $200 a Barrel

Shameless pitch for my own book: Weblogs & New Media: Marketing in Crisis

What's for dinner at your house? has been updated with two new recipes: Quick Easy Vegetable Soup and Pork Butt Stew.