Global Corporate America has decoupled from the American middle class; its interests are now international rather than domestic.

Global Corporate America has been decoupling from its country of origin for a long time, and the last weak bonds appear to be snapping.

Longtime correspondent Cheryl A. recently submitted this snippet from a recent The Atlantic article The Rise of the New Global Elite and this summary: "This is disturbing on so many levels."

The U.S.-based CEO of one of the worlds largest hedge funds told me that his firms investment committee often discusses the question of who wins and who loses in todays economy. In a recent internal debate, he said, one of his senior colleagues had argued that the hollowing-out of the American middle class didnt really matter. "His point was that if the transformation of the world economy lifts four people in China and India out of poverty and into the middle class, and meanwhile means one American drops out of the middle class, thats not such a bad trade," the CEO recalled.

The growing dependence of Global Corporate America on non-U.S. growth and profits, and the concurrent rise of its political power at the expense of the middle class, is displayed in this chart: 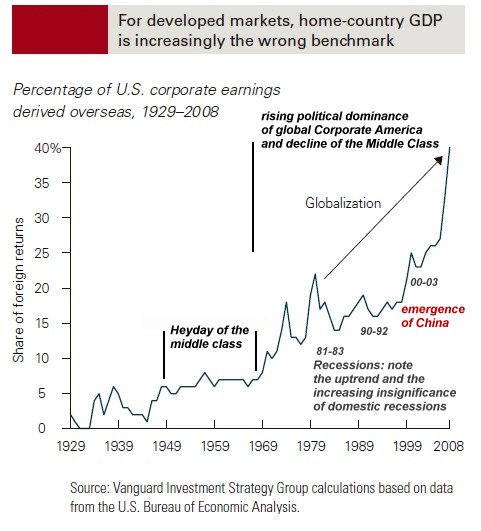 Let's look at the number of consumers of global U.S. corporations' goods and services in aggregate. According to the FDIC, about 25% of Americans have little or no access to credit. This is an excellent metric of proverty: in other words, 75 million Americans are too poor to purchase much more than rent (subsidized by Section 8 vouchers, etc.) food (subsidized by SNAP food stamps), minimal healthcare (subsidized by Medicaid), toothpaste, cable TV, mobile phone service and fancy footwear made in Asia. (Every "poor" person above the level of homeless I see on the subway or bus has fancy footwear and a cellphone.)

That leaves about 225 million Americans with enough discretionary income to be more rabid consumers of global corporate America's goods and services.

Alas, the U.S. is a mature consumer economy and the limits of consumer debt and leveraging seem to have been reached. As a result, corporate revenue growth in the domestic market is limited to GDP growth (most of which is generated by Federal borrowing and spending at this point): roughly 2-3%.

You can't "grow profits" 10% a year on this sort of tepid growth. So Corporate America's focus on international markets is not just rational but essential: there is no other way to grow revenues and profits.

The vast majority of new revenues and profits come from non-U.S. sales. Here is a snippet from David Rosenberg:

We scoured the data as best we could and found that almost all the growth in sales is coming from outside the U.S.A. where revenues are growing at barely a 3% annual rate. The pace is around 20% for foreign-derived sources.

Here are some "back of the envelope" estimates for global consumers of U.S.-based corporations' goods and services.

That means the domestic populace is around 15% of all potential consumers of at least some goods, and at best a mere quarter of all consumers of higher-cost goods and services.

One of the more eye-opening elements of global travel is to enter a tiny village store in Japan, Korea, China, Thailand, etc. and find Oreos and Crest toothpaste for sale.

How many more units of toothpaste and Oreos can be sold in the U.S.? Not many. How many more could be sold to 2 billion other people? A lot.

Corporations are operated by people. Their loyalty during their working hours is to the corporation, and the goal of the corporation is to maximize return on investment for the shareholders, owners and senior managers who will profit most from rising revenues and profits.

To expect corporations to extend loyalty to a nation is to misunderstand the entire purpose and directive of the corporation as an enterprise.

Is it merely coincidental that corporate profits from non-U.S. sales were flat during the heyday of the U.S. middle class, and that they have been rising as the middle class loses ground? I think this chart makes a strong case for a direct correlation. Global corporations now have the resources to influence the machinery of governance in their favor, and as noted above, this is the rational and necessary result of their prime directives and loyalties.

To decline to lobby the Federal government could spell disaster for a company's revenues and profits should competitors succeed in wiring the market to their advantage. Thus there is no choice now but to lobby for one's own interests. With corporate profits exceeding $1 trillion, the costs of influencing politics is now trivial.

The middle class is comparatively powerless: it is not a source of campaign funding, and half of its members don't even bother to vote. Most of those who do vote are swayed by easily purchased, expertly contrived propaganda.

As the discretionary purchasing power of the American middle class erodes, four times as many new potential customers appear elsewhere, hungry to taste the Oreos, become consumed by the iPhone, etc., and ten times as many are potential buyers of toothpaste and other basics.

The concern for domestic jobs is mere political expediency. U.S. corporations are pulling $500 billion in profits from non-U.S. sales, and they hold $1 trillion in stashed overseas profits in various tax havens. All the growth in their revenues and profits are coming from non-U.S. sources. Spending $3-$5 billion on lobbying and campaign contributions is an "investment" with extremely high returns: for that small sum, U.S.-based global corporations make sure the U.S. government and citizenry don't become overly burdensome or obstructive.


Live debate on deflation/hyperinflation, February 10, 9 p.m. EST. Most of you are already familiar with bloggers Stoneleigh of The Automatic Earth and Gonzolo Lira. Both are well-informed, articulate and persuasive, so the exchange on a topic of importance to us all (deflation vs. hyperinflation) is sure to be compelling.

Note: I was out of town all last week and have yet to catch up on correspondence. Your patience and forebearance are much appreciated.