The Federal Reserve's stated goal is to create modest inflation. Unfortunately they don't grasp the difference between speculative inflation and organic inflation. The Fed's official goals are to stabilize prices and maintain employment, and its de facto policy to achieve these lofty, high-minded goals is to divert huge sums of the national income to the insolvent banking sector.

The Fed also seeks to bail out the insolvent debt machine by generating some nice solid inflation, to boost the impaired assets held by banks. In other words, the Fed is specifically seeking to create asset inflation, which will eventually enable the banks to appear marginally solvent as their real estate and other assets rise in value.

Let's turn to the origins of the Fed inflation policy, as stated by Chairman Ben Bernanke in his various papers and speeches: deflation VS inflation: an Austrian Analysis:

In a paper from which he earned the sobriquet "Helicopter Ben," Chairman Bernanke provided a thought experiment to demonstrate that any deflation could be defeated: most economists would agree that a large enough helicopter drop [of newly created money] must raise the price level...at some point the public would attempt to convert its increased real wealth into goods and services, spending that would increase aggregate demand and prices.

In a speech a few years later, Bernanke detailed the policy mechanism by which the circulation of dollars might be increased at will: If the Treasury issued debt to purchase private assets and the Fed then purchased an equal amount of Treasury debt with newly created money, the whole operation would be the economic equivalent of direct open-market operations in private assets. "We conclude that, under a paper-money system, a determined government can always generate higher spending and hence positive inflation."

Here's the problem with Bernanke's "solution:" the assets he's goosed ever higher (stocks and bonds) are only held indirectly via pension funds for the bottom 80% of the populace. Only the top 10% of the citizenry own enough stocks and bonds directly to experience the "increased real wealth."

As a result, there's no follow-through of higher spending. Bernanke's policies have failed to generate higher spending for a number of fundamental reasons.

The distinction between housing assets and equity assets is absolutely critical, but it's completely lost on the Fed. We can see Bernanke's game plan in action in the most recent Fed Flow of Funds.

Housing equity has plummeted roughly $6 trillion from the bubble peak to Q3 2010 (and it has slipped further since): $22.6 trillion to $16.5 trillion.

Housing is the primary household asset for roughly 2/3 of U.S. households, while stocks and bonds are the primary asset for only the top 5%. So what Bernanke has effectively overseen is a massive transfer of private wealth.

He's also accomplished a stupendous transfer of national income to the financial Elites in the banking sector by lowering interest rates to zero (ZIRP). Back in the low inflation 1960s, banks and savings and loans were required to pay 5.25% on all savings. Cash, in other words, generated substantial income for ordinary savers.

The idea with ZIRP is to loan the banks essentially free money, which they can lend out at between 5% and 12% (or higher), generating "free" profits. The Fed's plan is to sluice these gigantic profits to banks so they can recapitalize their insolvent balance sheets without any direct handouts. But ZIRP is nothing but an indirect transfer of wealth from the private sector (now completely deprived of any interest income) to the banks.

The Fed's policies allow for only two ways to access this newly created "increase in real wealth" for the top 10%: sell the assets or borrow money from the banks. If people cash out their stock gains, then that would automatically push stocks lower, bollixing the game plan. The Fed's intention is to "nudge" the populace into borrowing more money from the banks at nominally high rates of interest (anythijng above 0% is pure profit for the banks).

Unfortunately for the Fed, those with rising assets are no longer hankering for higher debt levels, and the bottom 80% are no longer qualified to borrow. So what we have is a speculative asset inflation which is spilling over into commodities as hot money borrowed for next to nothing seeks higher returns anywhere on the planet.

Contrast this with organic inflation, in which people with lots of free cash are chasing limited goods and services.

Inflation itself is a transfer of wealth. As noted in the paper linked above:

In short, the true crux of deflation is that it does not hide the redistribution going hand in hand with changes in the quantity of money. It entails visible misery for many people, to the benefit of equally visible winners. This starkly contrasts with inflation, which creates anonymous winners at the expense of anonymous losers.

Inflation is a secret rip-off and thus the perfect vehicle for the exploitation of a population through its (false) elites, whereas deflation means open redistribution through bankruptcy according to the law.

The reason that public sentiment has always been biased against monetary deflation can be found in the manner in which wealth transfer occurs under inflationary and deflationary environments. During an inflationary credit expansion, wealth is transferred from the public in general to the earliest recipients of the newly created credit money. In practice the earliest recipients are interest groups with the strongest political connections to the State and, in particular, the State institutions that control monetary policy (i.e., the Federal Reserve in the United States).

Importantly, the wealth transfer that takes place during an inflation is hidden and largely unrecognized by the majority of the population. The population is unaware that the supply of money is increasing and the attendant rise in prices, ostensibly beneficial to business, initially produces [a] general state of euphoria, a false sense of well-being, in which everybody seems to prosper.

Those who without inflation would have made high profits make still higher ones. Those who would have made normal profits make unusually high ones. And not only businesses which were near failure but even some which ought to fail are kept above water by the unexpected boom. There is a general excess of demand over supply--all is saleable and everybody can continue what he had been doing.

And here precisely lies the answer to why the State prefers a policy of controlled inflation. Only in an inflationary environment can State largesse be conferred to the politically well-connected without raising public ire. The widespread and visible transfers of property through bankruptcy that must take place during a deflation are often politically destabilizing and thus highly unappealing to any regime. A sense of injustice grows within the population as banks are saved from the folly of their misguided investments with taxpayer-funded bailouts, while debtors with no political clout have property seized in bankruptcy.

Here is where we are in a nutshell. The general populace has seen its income decline as the Fed's ZIRP policy has channeled their interest income directly into the banks, and as their wages stagnate.

Yet thanks to the speculative inflation engineered by the Fed, prices are rising. In an organic inflation, wages and interest income would both be rising along with prices. So the direct result of the Fed's policies is higher costs and the transfer of national income to the banks.

The average household has seen its income and its asset base (housing) stagnate or decline. Meanwhile, the equities market, which directly "increases real wealth" in only the top 10%, has risen over 80% from the Q1 2009 low.

If the bottom 80% are seeing income and assets stagnate or decline, how can you possibly get organic inflation? Answer: you can't. And speculative inflation only benefits the top financial players, not the general populace.

If we combine this chart and the Fed Flow of Funds data, we find that mortgages total $10.1 trillion and other consumer debt is about $3 trillion. 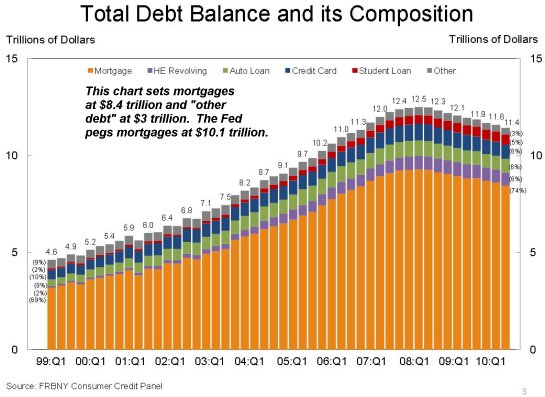 You want to create organic inflation, driven by consumers with plenty of cash chasing goods and services? Here's how:

1. Reinstate the policy of paying 5.25% on all savings, effectively transferring wealth back from banks to citizens. If the banks can't manage to do so and remain solvent, then close them down and liquidiate their assets and liabilities. Others will rise to take their places.

2. Print $5 trillion in cash, not credit, and liquidate all consumer debt and a couple trillion in mortgage debt for those who are not hopelessly underwater.

3. Aggressively cram down underwater mortgages onto the banks, forcing them to liquidate all their bad debt. Yes, this will reveal them as insolvent, but the goal here is not to save the financial Elites' impaired assets, it's to reset the housing market by clearing off all the impaired debt in the system.

By resetting the consumer balance sheet and paying interest, then you would be putting cash into households which could be spent in the real economy.

Is this a wise or prudent policy? I don't know. The goal here was not to assess that question, it was simply to follow up on the goal of creating inflation. If you want organic inflation, you have to divert the national income from the banks to the citizenry, and you have to reset the housing market.

The Fed's policies cannot create organic inflation, because all the Fed is doing is transferring wealth to the nation's Elites. Their spending on luxuries and fine dining are not broadbased enough to generate organic inflation in the entire economy.