The first issue of Denial Journal focuses on one of the capitals of denial, California.

Welcome to the state of Denial, oops, I mean California, where the state government is poised to run out of money even as public employee unions sue the state to stop employee furloughs and the state legislature bickers over drastic cuts in services which leave state wages, pensions and benefits essentially untouched. As the state's economy slides ever deeper into recession, tax revenues plummet, opening a projected $41 billion deficit which widens by the week. This is denial on a scale so grand that it borders on psychosis or alcoholic delusion. 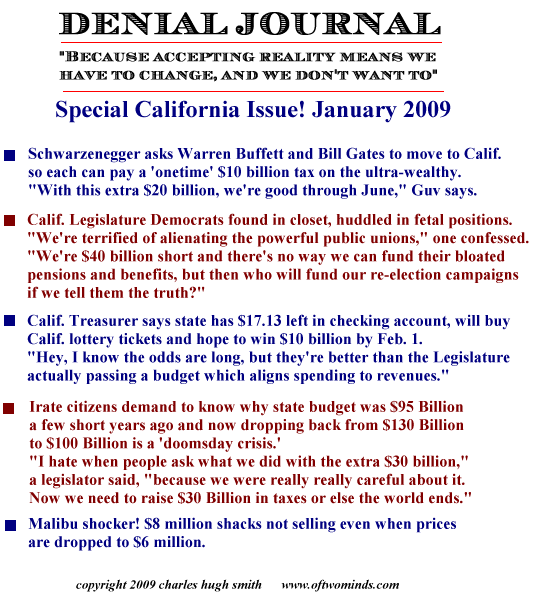 The state of denial pervades every crevice of government and the media. The disconnect between the crumbling economy and the wringing of hands over spending that is completely out of alignment with what the state can support is painfully obvious to everyone except the media and those in charge of the state's spending.

The headlines on page one of the San Francisco Chronicle on January 10 illustrated this disconnect:

State offices to shut 2 days every month; governor's move to save $1.3 billion in salaries meets resistance from treasurer, labor union

Perhaps the state treasurer and public employee union chiefs would like to print up $40 billion in nice crisp $100 bills so the state wouldn't have to live within its means?

Unfortunately, the consensus of labor leaders and their political supporters is that the solution is to weigh down a tottering economy with sharply higher taxes.

Meanwhile, in the real world, i.e. private enterprise, revenues sagging 25-30% requires massive, immediate belt-tightening, including a reduction in salaries and/or headcount in enterprises (like governments) in which 70% of the expenses are employee-related.

The first step out of denial is for the state and its unions to accept that government is in fact an enterprise, too--a special one, but an enterprise nonetheless. The second step is to face the consequences of this realization and move beyond a focus on "what we were promised."

In the real world, where expenses have to align with revenues, this is called ESSA: eliminate, simplify, standardize and automate. Now many state employees and managers are hard at work on these goals; so then the question becomes: are these workers getting support from their union and elected officials, or are they getting resistance to any change in the status quo?

If I were a public employee like most of my cousins, I know I'd much rather take a 10% salary cut and a rollback in my pension and benefits to the pre-bubble era circa 1995 rather than get laid off along with 30% of my colleagues so the luckier 70% could cling on without any reduction in pay and bennies.

The state and local governments are heavily dependent on three kinds of taxes:
1. capital gains taxes on stock and real estate profits. Those are history.
2. income taxes on high-wage earners ($100K+). Fewer of those around now as Hollywood and Silicon Valley take huge hits.
3. sales tax, which is likely to be raised from 8.5% to 10% and widened to a variety of services. As people spend less, sales taxes decline. Raising the rate actually raises the incentives to save and not spend.

As for raising taxes, here are some questions for elected officials, the media and public union leaders:

1. Will nailing car buyers with a minimum of $3,000 in license and sales taxes increase auto sales, or actually provide one more reason for consumers to avoid buying a new car?

2. Will laid-off private-sector employees and those getting their hours cut look kindly on your tax-raising desires to leave your own salaries, head counts and benefits untouched during a prolonged Depression?

3. Why does the media love to focus its hand-wringing on the cuts facing widows and orphans and completely avoid the skyrocketing costs of public pensions and benefits? Could it be related to the fact that the newspaper employees are also union members, and it's considered unsporting to examine why public employee pension costs are rising by 380% for local cities and counties?

Here in Berkeley, the pension costs are rising at geometric rates and thus threatening the entire budget, even before the Depression hit. Please see Changing Tides II: Could Municipal Bonds Become Risky? (November 13, 2007):

If state and local government leaders think they can avoid cutting salaries and pension benefits by raising taxes in a rapidly declining economy, they are delusional. I am sorry to say this, but the state's elected officials and public union leaders are as delusional as a full-blown alcoholic staggering down the sidewalk, begging for loans against future lottery "earnings" to ward off the DTs.

With auto sales, capital gains, $100K+ private-sector jobs and jobs in general all spiraling downward, the idea that you can raise billions in revenue by raising taxes is only incentivising state residents to save/spend less or move away.

I expect Denial Journal to find a place next to Whine:


Amazing offer for Amazon Kindle owners: get a complete novel by CHS for the grand total of $1.58 each:         Of Two Minds

(eBook version, for digital download to computers, PDAs and other mobile digital devices: $5.00): Mobipocket version
(To read the eBook, you will need to download the free Mobipocket reader; it only takes a moment.)