The "solution" to our Great Recession, we are told endlessly, is Keynesian stimulus. It's not working, as we have the "Keynesian Disease."

In an imperfect yet weirdly powerful analogy, I suddenly realized the Keynesian "cure"--constantly flooding the economy with stimulus--is exactly like blood sugar and insulin in the human body.

A number of our friends and family have diabetes (some Type 1, some Type 2); it is a scourge of a disease and a terrible burden on the individuals and on their families. I do not invoke insulin and blood sugar as analogies lightly.

In the analogy, Keynesian stimulus (the State borrowing and spending huge amounts of money to stimulate economic activity) is like blood sugar, the substance which is supposed to fuel strenuous activity.

I propose the following as a specific definition:

The Keynesian Disease results from permanently elevated levels of Central State stimulus in these forms: abnormally low interest rates, abnormally elevated liquidity and excessive borrowing to inject massive amounts of State spending into the private economy. As a result of this elevated stimulus, debt, misallocation of assets and speculation are overstimulated.

As chronic elevated State borrowing, fiscal spending and monetary "easing" continue unabated, the economy no longer responds to the stimulus--a mechanism akin to Adult Onset Diabetes in which insulin no longer has any effect on elevated blood sugar levels in the body.

The Keynesian Disease inevitably leads to financial demise as the rampant growth in private and public debt, misallocation of assets and speculation driven by endless Federal debt, spending and "easing" rises to fatal levels.

Lots of people are speaking about Keynesianism and how it allowed the government to spend vast amount of borrowed money without end, caused the country to become socialist etc. I started wondering how such an unbalanced economic theory could be come so prominent so, studying a bit about Keynes (Actually restudied).

But actually it seem that our politicians have never prescribed to Keynes' theories. Keynes advocated countercyclical fiscal policies. So when times are bad the government should use deficit spending to ensure full employment and during boom times using fiscal policy to suppress inflation and pay down debts incurred during tough times.

Unfortunately, the right wing and the media have grabbed half a theory and pinned it to our politicians to the detriment of an economic theory that seems to make sense and seems to have helped us emerge from the great depression.

The other unfortunate, nearly criminal, part is that our leaders of the past thirty years have left this country with such large debts that any attempts to use fiscal policy to help us emerge from this super-recession will create a long term drag on the future and our standard of living. In reality our government only has one way out and it is to print money and create inflation to destroy the holders of US debt (Argentina did it). Again, anti-Keynes.

Thank you, Mark. I would only add that the "left wing" (to the degree that the Democrats can be considered "left") has been just as guilty as the right of borrowing and spending in mad Keynesian abandon. Other than a few years around 2000, and only as a result of tax revenues surging due to an insane asset bubble in stock markets (the dot-com era), the Federal government has borrowed (and spent) tens of billions of dollars a year, decade after decade, regardless of which party was in control.

Despite the trumped-up "debate" between "guns and butter" (social spending and military spending), the truth is all administrations have spent freely on both guns and butter, and borrowed to do so. Consider just how much the Central State has grown: 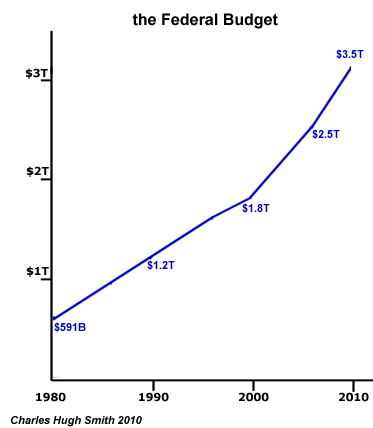 According to the BLS inflation calculator, if the $591 billion Federal budget of 1980 had remained constant in adjusted dollars, it would be a mere $1.55 trillion rather than $3.55 trillion. (The actual Federal spending in fiscal 2009 was $3.55 trillion, but the government guesstimates that spending will drop to a mere $3.1 trillion "soon." Heh.)

We are now seeing the tragic results of "The Keynesian Disease": unprecedented, massive Federal fiscal and monetary stimulus is having almost no impact on the exhausted, ill U.S. economy. Everyone that could borrow has either already borrowed to the hilt and is now faced with paying down debt with shrinking assets and income, or they have no desire to take on more debt regardless of how long the Fed keeps interest rates near-zero. The only parties anxious to borrow are speculators who deploy the funds in various "carry trades" which add nothing to the real economy.

The Federal government borrowed a staggering $1.5 trillion last year (tax revenues were only $2 trillion, so roughly 45% of the entire Federal spending was borrowed) and deficits of more than $1 trillion a year are forecast essentially forever.

Such levels of borrowing are not sustainable.

Meanwhile, massive Federal "stimulus" spending is largely misallocated or squandered, and whatever funds do trickle down to households is being used to pay down astronomically high debt levels.

Across the Pacific, China has induced a stupendous "sugar high" with a fiscal and monetary stimulus injection which far exceeds the Federal "package" on a GDP/per capita basis. Given the massive jolt of free money, sure enough speculation surged and condos in Shanghai practically doubled. Apartments in Beijing now cost 80 times average incomes (4 times income would be "normal"). Malinvestment is also running wild, with new factories coming online even as the existing ones have no market for their goods.

It's a perverse cycle, isn't it? As the effects of the Keynesian injections of stimulus on the real economy diminish, the State administers ever higher the doses, which in turn only exacerbate the illness: debt levels and speculation rise even as the real economy crumbles under malinvestment, speculative excess and crushing debts.

In the Survival+ critique, this growing dependence on Keynsian borrowing and spending also results from the rising power of Power Elite protected fiefdoms which scream bloody murder at the slightest reductions in their budgets. As a result, well-meaning attempts to reduce the stimulus swag in "good times" are beaten back as "life-threatening cuts" by powerful constituencies which have grown dependent on State largesse.

This will end badly, and the first alarms will probably be sounded (and ignored) in the 2012-2014 timeframe. When the Federal government cannot borrow $1.5 trillion every year except from the Federal Reserve, the Keynesian Disease will finally trigger consequences-- and it won't be "growth."