While hand-wringing pundits focus on the waning of print media, few look at the immense advantages of New Media publishing.

A mere two months after its initial release, I have revised Survival+ with improved readability and a new cover.

The process was free (other than my time) and took about 10 days out of the book's availability.

Even more striking, from my point of view, the book's revision was based on feedback from readers.

I am not referring to a weblog or other digital confection of pixels on a screen--I refer to a material-world print book which weighs about 1.5 pounds (.68 KG). That is remarkable: a physical book can be revised in response to reader feedback and suggestions in a mere 10 days.

When I completed the book in late October, 2009, I was able to have the physical book available for purchase 10 days later; digital versions were released at the same time.

Equally remarkable, the free version which I'd distributed digitally via this website in July 2009 was updated and expanded to 85,000 words, and released along with the "requires payment" digital and print versions.

Contrast this with the standard publishing model which still dominates the book publishing, distribution and bookselling industries:

No free version is ever released, as the fear is that it would decimate sales.

Once the book is actually completed and submitted to the publisher, it takes a minimum of a year and usually longer for the book to be published/issued.

All useful rights to the book have been ceded by the author to the publisher. If the publisher reckons sales don't justify keeping the book in print after the initial run, the publisher can, without consulting the author, pull the book, rendering it "out of print."

Once the book is out of print, the rights don't automatically return to the author; many writers are left begging for the rights to their own work for years on end, while their book loses potential sales due to being "out of print."

Whatever sales are made of the book are not lucrative to the writer; given that royalties are generally 10%-15% of the wholesale price of the book (50% of the retail price), then the author ends up with perhaps 5% of the retail price: $1 from a $20 book, out of which he/she pays a literary agent 10% - 15% (not all sales to publishers involve agents, but most do, as agents act as the first firewall which eliminates most potential authors from the process).

That's wonderful if the agent sold the book for a $500,000 advance on royalties, but in the real world huge advances are disappearing faster than ice in Death Valley in July.

The entire distribution system to booksellers is unchanged since about 1750 (a rough guess-- it might be 1650 or even earlier). At great expense, the publisher ships a number of books to booksellers. The books sit on shelves for a period of time and hopefully a few are sold. Eventually, those which are not sold are returned to the publisher for a full refund.

In other words, booksellers never pay for more copies than they sell.

The returned books are then "remaindered" by the publisher (sold for whatever they can get, perhaps 10% or less of the wholesale value) or simply recycled.

If you could design a slower, more wasteful system, I would be interested in the results.

The entire process depends on the mainstream media and a handful of reviewers at a few publications for PR/"juice": Kirkus Reviews, for example, which has been scheduled to close. A buyer may emerge, or so it is rumored; whether any buyer will make money is another question.

The presumption is that a glowing review will vault the book into buyers' awareness, and send them to the bookstore to plunk down serious cash without more than a glimpse in the book's pages. (Hence the importance of glowing reviews on the back cover and a gripping first line: "Lolita. Light of my life, fire of my loins. My sin, my soul. Lo-lee-ta." etc.

If readers--or potential readers--had some suggestions for improvement, tough luck: the publishers are generally uninterested (despite the slick sheen of public relations to the contrary) and the design, packaging, content and every other aspect are handled by gatekeepers and professionals whose entire job is to prepare the sacred text for the passive consumption of the masses.

Indeed, the publishers' financial viability rests not with the quality of the texts or the sales of a variety of texts but the sale of one or two texts (by Dan Brown, Stephen King, etc.) in the millions.

Any revisions will only emerge in a second edition, issued years later (if the book hasn't been sent to the "out of print" Gulag of No Return).

The publishers and authors are remote from the passive "consumers" of their "product." Yes, there are blogs and such for readers to contact the author, but the author is powerless to change his/her book.

Contrast this with the model being used for Survival+. Two months after publishing the first edition, I can see the great merit of readers' recommendations, which I then acted on to the benefit of future readers.

I do not need to sell gazillions of copies to "justify" this revision; since the revision is free (except for my time), I am free to revise/improve the book at any time. Indeed, I need not sell a single copy to fund the improvements.

Knowing I will receive thoughtful, insightful reader feedback in the months ahead, I am already planning a more thorough revision of the text later in 2010.

Why buy a print copy when a free version is available? Why, indeed? Last time I looked (about a month ago), over 37,000 copies of the free version had been downloaded. Maybe a lot of people got bogged down by page 3; it's certainly likely. Nonetheless by now some 40,000 people have at least taken a look at the first 2/3 of the full book--for free.

Thank you for taking a look. Some readers told me they printed it out and passed it to friends, which I accepted as a great compliment.

So why buy a print version? Perhaps because it's still easier to read a 140,000 word book in the print version. Why donate money to the blog in order to receive a signed copy? Why, indeed, except to issue a vote of support to the author, who you have come to know fairly well over the course of reading his voluminous, inconsistent-quality entries. You might have sent him a critique and received an emailed reply. Whatever the connection, you know I am a real person with all the same challenges everyone else faces: surviving hard times, aging, caring for friends' kids, etc. etc.

The signature on the book, though worthless in monetary terms, is a token of authenticity and "realness" in a world increasingly detached from those qualities.

Marketing guru Seth Godin claims a print book is in essence no more than a souvenir of some digital transaction/interface; perhaps. But I suspect it remains more than a souvenir: it is, in its physicality, something which endures the loss of electricity, the crash of an operating system, and the "delete" button.

As a physical object, it carries with it the promise (and hopefully more than the promise, but at a minimum, at least that) of a cogent, organized shedding of light on complex topics of import and meaning.

No TV program, film, song, symphony, or series of discrete stories/articles can provide that same value. Yes, a book can be read on a digital screen, but this does not quite convey the physical sense of depth; the digital version of a work feels and reads the same whether it is 40 pages or 400 pages.

And perhaps most amazingly from my point of view as the author, you the reader of this weblog have been an integral part of the creation and editing process from the start, just as you will play a symbiotic editorial role in all future revisions.

I have read the book endless times on screen in the process of editing, adding, revising and reworking the text; yet I myself tire of the digital version on the screen and turn to the print version for a sense of the entire flow of the work.

So in every way, you and I are both pioneers in New Media--a realization not of the demise of print books but the full flowering of print books.

Thank you, readers, for your essential contributions to my own learning, for your critiques and suggestions of texts to study, and for your purchase of the book and your contributions of money which have enabled the project to proceed.

After finishing the book, I fell into the typical manic/depressive end-state; after the completion comes a sense of futility and a weariness with the whole project of seeking to illuminate some of the darkness ahead. You bolstered my spirits with kind words of encouragement and dozens of completely unexpected financial donations.

It was this outpouring of encouragement and support which crystallized my awareness that this blog, and this book, are truly joint projects; "of two minds" indeed. 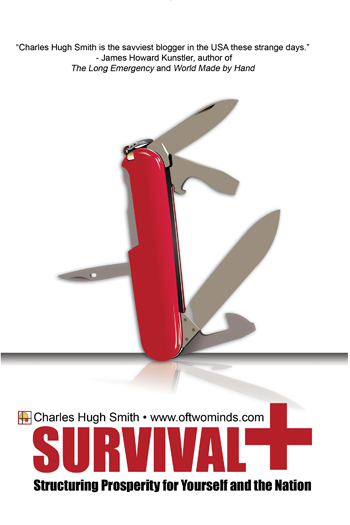 A NOTE on future readability: Reader Marc M.W. asked if I have any plans to further improve the readability of the text. Alas no, for the reason that I must keep the book at around 400 pages lest it appear even more formidable than it already does. Thus I won't be able to increase the font size again.

As Marc noted, the digital versions have the great advantage of having adjustable font size; score a big plus for the digital ebook.